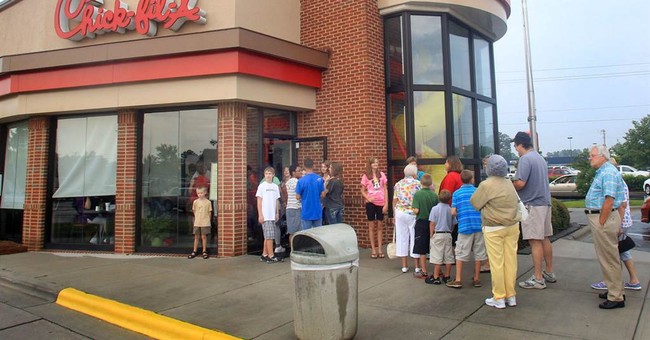 What do Chick-fil –A and Starbucks have in common besides food and beverages? Controversy – and lots of it – as the executive leaders of both companies have taken public stands on one of America’s most contentious cultural and public policy issues.

You probably heard about the Chick-fil-A fiasco of last year. Founded by S. Truett Cathy, today the company is headed by Truett’s son Dan Cathy, and in June and July of 2012 the company and its franchisees was subject to maligning in the media and attempted boycotts by liberal activist groups because of public statements that Dan made about his support for traditional heterosexual marriage.

The fact that Chick-fil-A is one of the most successful restaurant enterprises in the world and that it employs lots of Americans simply did not matter to the liberal activists. It also didn’t matter that in 2010 Chick-fil-A became the global chain restaurant leader based on an “average annual sales per restaurant” calculation, nor did it matter that the company has one of the lowest franchise entry costs in the world, or that it receives an average of 20,000 applications to fill its annual 60-70 franchise openings each year. And it probably didn’t matter to the boycotters that they were reacting to one man’s opinion, an opinion that isn’t necessarily shared by all Chick-fil-A franchisees and employees.

All that mattered, apparently, was that Dan Cathy expressed the “wrong opinion,” so far as the liberal activists were concerned, and it was therefore time to bring harm to his company. After an initial backlash was attempted against the company and its franchisees, a “backlash against the backlash” eventually ensued and Chick-fil-A saw an uptick in their revenues. But the lesson of this episode was clear: some of our fellow Americans are quite willing to damage a local employer in their area if it seems politically beneficial to do so.

While opposing same-sex marriage was good for Chick-fil-A (even if only in the short-run), supporting it proved bad for Starbucks. In January of 2012 an executive with the publicly traded company drew fire for his public statement in support of same-sex marriage, which soon engendered a public boycott of Starbucks by conservative “pro-traditional marriage” groups. After a few months of declining sales, Starbucks CEO Howard Schultz was asked at a shareholder’s meeting about the wisdom of personal political statements being made by the company’s executives, to which Shultz replied, “"if you feel, respectfully, that you can get a higher return than the 38 percent you got last year, it’s a free country. You can sell your shares of Starbucks and buy shares in another company.” Starbucks sales continued to slide for a while, and then the controversy eventually evaporated – but the damage, if only in the short run, had been done.

The fact that Starbucks is by nearly any measurement one of the most socially responsible and generous companies in the world, apparently didn’t matter to the socially conservative activists. It apparently didn’t matter that Starbucks provides medical, dental and vision health coverage to nearly all of its employees including part-timers, nor did it matter that they lead the world in corporate recycling efforts and at times pay higher prices for coffee beans so as to ensure that they are patronizing coffee growers who pay “fair wages” to their workers. And the social conservatives who protested Starbucks over the marriage issue may very well have been unaware that the company has drawn other boycotts from gun control groups – along with support from gun enthusiasts -because Starbucks has resisted social pressure to ban concealed-carry weapons in their stores. Once again activists were reacting to the opinions of one or two executives – opinions that are not necessarily shared by all of Starbucks employees and shareholders – and there was not only willingness but a clear intent to damage the company.

Obviously, boycotts are in most cases perfectly legal, and often provide an appropriate way to express one’s opinions and preferences based upon expenditures that one doesn’t make. But given the current economic, cultural and political climate, individuals and activist groups would do well to become more thoughtful and careful about who gets targeted. In an effort to make a cultural or political statement, one can end up diminishing somebody else’s livelihood or even damaging one’s local community.

Targeting, protesting, boycotting – the plight of Starbucks and Chick-fil-A will likely become more common in the coming weeks and months, and probably will be felt by more and more businesses, including many local small business operators. In the aftermath of the Supreme Court ruling on same-sex marriage, employers will be faced with public pressure and lawsuits demanding employee benefits for same-sex domestic partners. And with the next implementation phase of Obamacare in January of 2014, businesses will be faced with public scorn and legal threats when they lay-off workers or cut employee hours while figuring out how to pay for Obamacare compliance.

There is a rough road that lies ahead for American enterprise. Activists and consumers alike would do well to become more thoughtful about the plight of the business owner, and less inclined to lash-out.