Do Conservatives Begrudge Palin for Her Success? 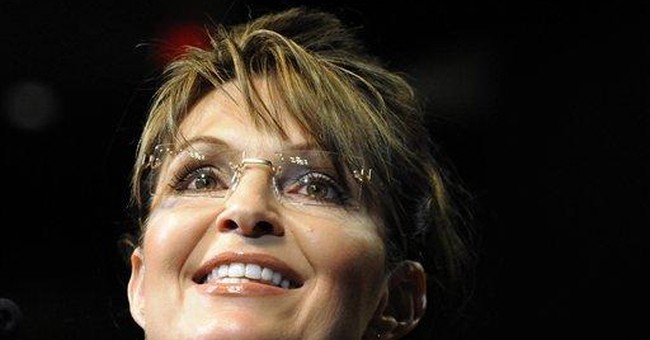 “Palin used to be about the people, but she isn’t anymore. These days, Palin is all about Palin…”

Ouch! Did I really hear that comment on a “conservative” radio talk show?

It happened last week after former Alaska Governor Sarah Palin appeared on NBC-TV with Jay Leno. I was listening online to talk show hosts Barry Young and Michele Larson at Phoenix, Arizona’s 550 KFYI radio, as they discussed, among other things, whether Palin’s TV appearance had made her look more, or less, “presidential.”

“Karen,” a caller to the show, claimed that she had been one of the several hundred people who gathered outside a Phoenix-area store where Palin appeared last December, and waited overnight for the opportunity to meet Palin and purchase an autographed copy of her book.

When, after all those hours of waiting, Karen finally got in the door to see Palin, she was forbidden from taking a photo with the former Governor. “They actually took your photo for you when you were speaking with Palin” Karen explained to the two Arizona talk show hosts, “and then they would try to sell you a copy of it for twenty dollars after you got through the line.” And it seems that the selling of the photos was the deal-breaker for Karen and her admiration for Palin. According to her, Palin, who was apparently at one time all “about the people,” was now gratuitously “all about Palin.”

Whether or not you liked Palin’s performance on “The Tonight Show,” and whether or not you think Palin has a future in American politics, are both interesting topics that are worthy of discussion. But I’m not interested in debating those matters here.

For the moment, I’m far more concerned with people who purport to be “former fans” of Palin (later that same day a caller to my own talk show expressed similar disgust, stating that "Sarah has totally sold out” – whatever that means), but now are somehow offended or “put-off” by her. What’s the problem? Her rising celebrity status? Her venturing into national media? Her apparent financial success?

The continual attacks on Palin from the cultural left, while reprehensible, are nonetheless understandable. Given its narrow-minded allegiance to stereotypes, liberal America simply doesn’t know what to do with a sexy, telegenic woman who believes in things like traditional marriage and American exceptionalism. Women who believe as Palin does, so the liberal assumptions go, are supposed to fit the frumpy, dowdy, "church-lady" description. But Palin shatters that assumption, and thus, the left’s response to her is to lash-out.

But regardless of one’s political or cultural leanings, any American who feels uncomfortable in the face of Palin’s recent choices and fortunes should ask themselves “why?” Why is it so unnerving to observe a woman in the public eye rise from modest, middleclass status, to wealthy, high-powered celebrity status, in less than two years?

American freedom, and American-styled capitalism, provide an environment where “rags-to-riches,” Palin-type stories actually happen. No other society to precede America provided such enormous opportunity for upward mobility, and no other contemporary society does it better than we do now.

Yet part of the success of American capitalism is found in the fact that, just as we generally do well at extending opportunity to everyone, we generally don’t try to guarantee specific economic outcomes to anyone. History shows us that when government authorities step-in and try to assure some arbitrary “minimum level” of economic success, people lose their inclination to work hard, behave responsibly, and become their very best.

This means that Americans are quite free to succeed, yet we live with the risk of failure as well. It’s a scary thing, this notion of American freedom, but it has a track record of serving humanity in profound and equitable ways.

But with no guarantee of economic outcome, some people inevitably create more success than others do. And our current President and Congress, undergirded by their leftist, economic redistributionist philosophies, are intent on changing this “imbalance of outcome” according to what they think is “fair.” Indeed, they are determined (to reiterate a phrase that is woefully overused by the Obama Administration) to “level the playing field.”

Americans are currently (and overwhelmingly) rejecting the agenda in Washington. Yet I suspect that some of the same “conservative” Americans who are decrying President Obama’s “socialism,” are also uncomfortable with Sarah Palin being too much “about Palin.”

“But if she keeps charging people for photos and all of that” a caller to my talk show told me, “she’s going to irritate her core supporters.” Yep, Sarah Palin’s choices may very well alienate her supporters. And without our government guaranteeing economic outcomes, all our economic choices entail a level of risk. But Palin is nonetheless free to charge for photos, risky as that may be - and I’m free to decide whether or not to buy them.

Will “conservatives” let Palin be Palin? Will Americans allow the “free market” to remain free?