Barack Obama And The Economics Of Sesame Street 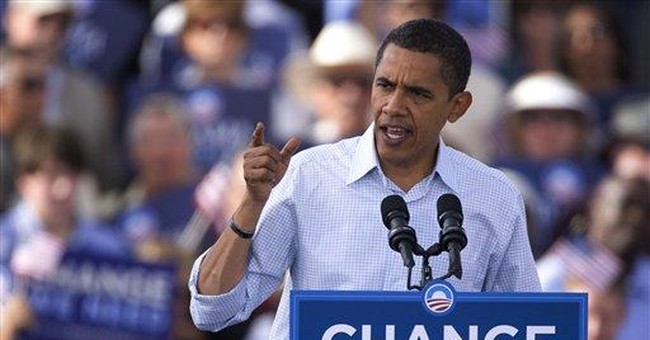 Forget Wall Street. And forget Main Street. The economic considerations in both those places - - fraught with all that crazy obsessing over start-up capital, balance sheets, budget projections, profit and loss statements, and so forth - - that’s just all too complicated.

So let’s not even try to think about those things. And while we’re not thinking, let’s usher-in a new President who can shelter us from the harsh considerations of risk and reward, market competition, investment and planning, and all the rest. Let’s elect a President who has distilled economic realities into simple juxtapositions that even a kid can understand- - things like “fairness” versus “unfairness,” and “selfishness” versus “neighborliness.”

That’s right, it’s time for President Obama and the economics of Sesame Street.

Does that sound harsh? Well, consider this: while most Americans find it distasteful, if not blasphemous, to single-out a minority group for undue maligning and punishment, Senator Obama has made “profiling” of a “minority group” a normative thing. We’re not talking here about a racial or cultural or sexual minority. We’re talking about a socioeconomic minority - - the more economically productive people in our society, or, to put in Obama-speak, the group he vaguely defines as “rich people” - - and punishing this minority group is, by his definition, “fair” and “neighborly.”

It’s true. When Senator Obama was interviewed by Bill O’Rielly at the Fox Newschannel in September of this year, O’Rielly began the segment on taxation policy by saying to the Senator “you’re a big ‘tax the rich’ guy, aren’t ya?” Near the end of the discussion, Obama asserted that it is a matter of “neighborliness” to take ever-increasing levels of cash from the nation’s highest income earners, and give it to lower income earners.

And let me be clear: this is not what I envision for my neighborhood, or my country. But for the very multi-cultural, Mister “I-grew-up-in-Indonesia-and-I’ve-seen-how-terrible-America-is-from-the-other-side” Barack Obama, this is the way things ought to be.

Days after the O’Rielly interview, Obama’s running mate Senator Joe Biden made the redistributionist economics even more easily understood. “We want to take money” Biden told a host at ABC-TV’s “Good Morning America” (with no reference to whose money he wants to ‘take” or how the money is earned), “and put it in the pockets of the middle class.” He quickly followed up that explanation by insisting that the plan was “patriotic,” and was all about “fairness.”

And now after roughly three weeks of McCain and Palin questioning the wisdom of Obama’s redistributionist economic plans (and just when you thought he could not possibly get more “audacious”), we saw Obama introduce another emotive, Sesame Street-friendly term into the big economic debate last Friday. McCain and Palin, according to the Senator, have made a virtue out of “selfishness.” That’s right, those of us who want to retain most of our hard-earned revenues - - those of us who think that we can manage our money to better ends than government agencies can - - we are “selfish.” If only we would practice our “neighborliness” a bit more often…

It’s sad that economics - - a subject that is dry and boring and academic to some, yet it is essential to our very essence as human beings - - has been so horribly trivialized and reduced down to a few simple, emotive categories. And yet the campaign is working phenomenally well. I hear from the “Obama Automatons” on a regular basis, when they call in to my talk show at Washington, DC’s 630 WMAL radio.

Just last Friday I took a call from a gentleman who, with campaign talking points in hand, insisted to me that there is no need for concern about Obama’s economic plans - - he just wants to change course from the “disastrous policies” of the Bush years and return America to the economic prosperity of the Clinton era.

“Oh really,” I said to him, “what was the capital gains tax rate while Bill Clinton was President?”

“I don’t know” the caller replied.

“And what is Mr. Obama proposing for a capital gains tax rate?” I asked.

“I understand” I said to the man. “You’re just reading the campaign talking points and you weren’t expecting any questions from me…”

“I am not just reading talking points” the man shouted angrily. “I work in Obama’s campaign as a volunteer.”

“And yet you still have no idea what you’re talking about with Obama’s economic proposals - - that‘s very interesting” I replied, as I thanked him for his call and moved on.

I suspect there are millions of Americans who have absolutely no comprehension of the substance of Obama’s proposals, yet they have worked for, and will vote for “Hope” and “Change.”

I hope they’re able to enjoy their Sesame Street economic fantasy while it lasts.