The Navy's Robot War in the South China Sea

Austin Bay
|
Posted: Dec 17, 2020 12:01 AM
Share   Tweet
The opinions expressed by columnists are their own and do not necessarily represent the views of Townhall.com. 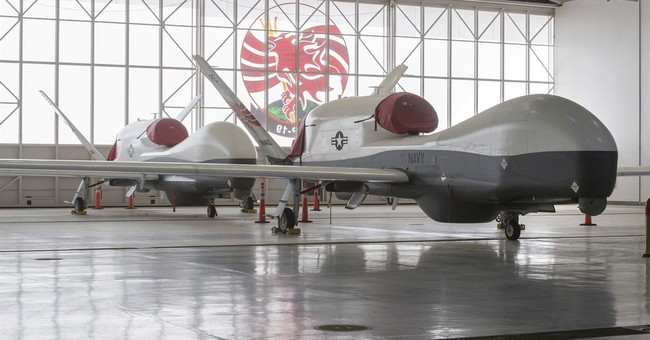 The first "high-end" war won or lost by robots may be fought at sea. The South China Sea, extending from China's southern coast to Singapore, is a likely candidate for this battleground. At this moment in time, it has replaced the Korean Peninsula as the most dangerous military collision between the great powers China and the U.S.

This past September, U.S. Navy Rear Adm. Robert Gaucher quietly told a technology conference that sometime in early 2021, the U.S. Pacific Fleet will run a fleet battle problem under operational conditions designed to test unmanned combat systems such as unmanned warships, aircraft and other weapons systems. To clarify in common terms, Gaucher revealed the Navy planned to conduct a major exercise designed to experiment with drones and robots under strenuous wartime-like conditions. The Navy is particularly interested in learning how to integrate autonomous unmanned vessels, meaning ships without sailors, into fleet combat operations.

U.S. Indo-Pacific Command (INDO-PACOM), where Gaucher serves, is a joint command, so I suspect the Air Force would be involved as well. Where would the INDO-PACOM exercise take place?

In September, several defense media sources pointed out that no matter where the Navy conducts the exercise, the target audience and target adversary is China. Gaucher told the conference, "I want to be able to put an unmanned surface ship inside the adversary's denied areas." His word choice sent a message. China boasts that it can and will deny the U.S. military access to the South China Sea. That is China's operational intent. Its strategic intent is political control of the region and, I think, control of Singapore.

The U.S. intends to maintain access to the area, which includes freedom of navigation.

Where do robots fit in? To heck with the strategic and operational lingo. Robots address a tactical consideration important to every soldier, sailor, airman or Marine who might face direct combat. And Gaucher addressed it. He said, "If I lose it," -- the unmanned vessel he ordered into the denied area -- "I'm losing a much less expensive ship, and I'm not losing American lives, but I'm still creating a problem -- whether I'm making them shoot it and I'm finding out where they are... or I'm making them waste a weapon on it, or I'm getting a couple of shots off before I lose it."

The admiral envisioned a situation where a robot ship (unmanned autonomous war vessel) would serve a useful military purpose if it fired a few shots and the adversary had to waste an expensive smart weapon to destroy it. The smart weapon was built to sink an American capital ship, a destroyer or cruiser, not the Long-Range Unmanned Surface Vessel (LRUSV) creating the havoc.

Is the admiral right? He's totally right about avoiding the loss of American military personnel.

The fact is, for years, USVs (unmanned surface vessels) and UUVs (unmanned underwater vessels) have served the Navy well in jobs like sweeping mines, anti-submarine warfare and intelligence gathering.

Whether they were genuine robots is debatable. Like the remotely piloted Predator unmanned aerial vehicle (UAV), the vessels may have had autonomous capabilities, but they also had a human involved.

However, the next generation of unmanned vessels will come close to having autonomous warfighting capability.

The Navy recently revealed the LRUSV will have a range of a thousand miles (open ocean). Five LRUSVs will be able to conduct a combined operation. That's a swarm attack, similar to those Iranian speedboats' attempt in the Persian Gulf. Hence the race to create Swarmware, the software required to coordinate USVs or UAVs in order to accomplish a mission without human control.

Will the Navy be testing Swarmware in the fleet battle problem? My answer: It had better be.