Austin Bay
|
Posted: Dec 12, 2019 12:01 AM
Share   Tweet
The opinions expressed by columnists are their own and do not necessarily represent the views of Townhall.com. 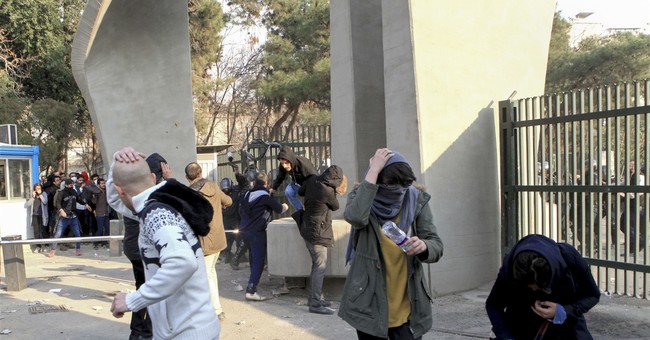 That's right. Two years ago, insistent and widespread protests in Iran's major cities shook the ayatollah regime. Shutting down the internet didn't stop the worldwide circulation of cellphone videos that documented the protests and the social media dissemination of grievances.

Regime propagandists described the demonstrations as a wave.

But was December 2017 a wave or a rising tide? Since spring 2018, public demonstrations staged by angry Iranians have waxed and waned but always returned. Here's a sketch of the process: Protests erupt, sometimes in response to a local grievance. When regime secret police and Iranian Revolutionary Guard Corps goons intimidate, arrest or murder demonstrators, the crowds disperse, and protests subside. Then new protests break out in a different city quarter or another town 200 kilometers away.

Why do they reemerge? Because public resentment and disgust with the failed Islamic regime is a deep, pervasive and now permanent fact of Iranian life.

In 1979, Ayatollah Khomeini toppled the shah and established his Islamic regime. Within a year, however, Khomeini's clique of radical ideological Islamists confronted serious internal political opposition in the person of Iran's first post-revolution president, Abolhassan Bani-Sadr. Bani-Sadr despised America but committed himself to "democratic values and the rights of individuals." Khomeini despised democracy and undermined Bani-Sadr's authority. Saddam Hussein's 1980 invasion of Iran stalled Khomeini's domestic opponents. In 1981, the ayatollah drove Bani-Sadr into exile.

By 1990, however, all but the most zealot Khomeinists knew the revolution had fossilized and its senior leaders were cutting corrupt deals.

Since roughly 1995, the robed dictators and senior IRGC commanders have faced this grim question: When will the Iranian people be willing to spill their own blood to confront the clerical regime?

Anti-regime protests have occurred. The 2009 Green Movement challenged the regime, but the Obama administration failed to provide timely and meaningful support.

This past October, dictatorship propagandists announced that the protests roiling Iran during summer 2019 had ended. Repression had succeeded in halting what regime apologists called a wave of protests, some sparked by decrepit and polluted water systems.

Wave or rising tide? In mid-November, the dictatorship announced that it would increase the price of fuel. The Iranian people immediately returned to the streets.

Blood is spilling. Observers already describe the current bloodletting as the most serious since 2009. As of Dec. 8, U.N. human rights monitors report that 208 Iranians have died in demonstrations since mid-November. U.S. Special Representative for Iran Brian Hook believes the regime has murdered over 1,000 people since mid-November. Both the U.N. and U.S. estimate 7,000 arrested.

Students and educated professionals played major roles in the summer 2009 and the initial December 2017 protests. Reports describe the majority of December 2019 protesters in Tehran as being "unemployed or low-income men between the ages of 19 and 26."

Have impoverished men taken to the capital's streets? Protests? Street fighting is a more apt term.

The December 2019 confrontations may be the most significant challenge the ayatollahs have faced since 1979. Consider the context. The regime's rigged economy has stalled. The Trump administration intends to further tighten economic and political sanctions. The regime's reckless, violent grandiosity has mired Iran country in endless wars, Yemen and Syria being the most notorious. Instead of repairing Iranian roads and water systems, the regime finances the Lebanese Hezbollah, Hamas and the Palestinian Islamic jihad terror groups.

Where did the billions of dollars go, the money the Obama administration gave the ayatollahs in exchange for temporarily mothballing part of their nuclear weapons program? Yes, Obama's deal was delusional and riddled with loopholes, but the billions were hard cash.

Angry Iranians believe regime insiders stole some of the cash -- that's the rumor. Rumors like that provoke jobless, desperate men with nothing to lose.