Austin Bay
|
Posted: May 15, 2019 12:01 AM
Share   Tweet
The opinions expressed by columnists are their own and do not necessarily represent the views of Townhall.com. 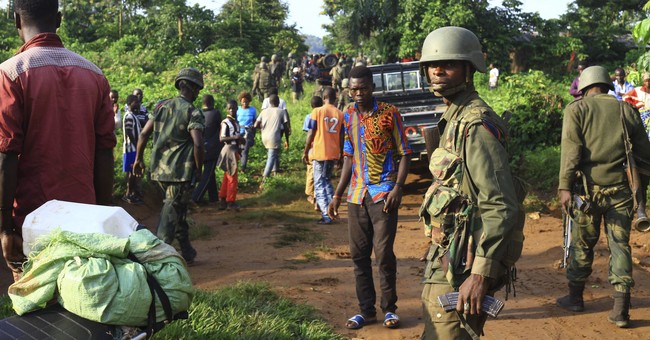 Unfortunately for all homo sapiens living within 200 kilometers or so of a major airport anywhere on this planet, the Ebola virus epidemic afflicting eastern Congo constitutes a deadly, international, mass-casualty threat to human life.

And there are political predators who would like to see this plague seed global fear and death.

Before I address that point, note that all of the grave political, cultural and economic ills I mentioned in this column's first sentence are means of magnifying the Ebola epidemic's regional and global threat.

Let me reinforce this point with a weapons of mass destruction (WMD) analogy. Whether the sane among us are trying to contain nuclear and chemical weapons proliferation or a deadly disease with a high fatality rate, war frustrates the best attempts to contain the mega killers.

I'll stipulate that nuclear weapons kill en masse those near ground zero, while disease is less point-specific, even diseases that are potential biological weapons of mass destruction.

The sad fact of human death is we all die one by one, whatever the cause. Despite Hiroshima, viral and biotic contagions are by far history's worst mass killers of human beings. The Black Death killed 1 in 3 Europeans. There's some debate on the exact figure but not on the bottom-line effect.

The sci-fi perspective is speculative. The Ebola plague in Congo's North Kivu and Ituri provinces is now and in our face.

In August 2018, the World Health Organization (WHO) declared the eastern Congo outbreak an epidemic. As of May 12, WHO reports 1,705 Ebola cases, 1,617 confirmed and 88 probable. There are 1,124 confirmed deaths and 456 survivors. (WHO's media office sent me those statistics May 14.)

But West Africa's outbreak didn't confront terrorists with a global mass murder agenda who think Ebola is a weapon of mass destruction their terror attacks can unleash.

According to a StrategyPage.com, on Feb. 24, gunmen attacked an Ebola clinic in the North Kivu city of Butembo. "The men hurled rocks then burned clinic supplies and water and sanitation equipment," it said. On Feb. 27, attackers struck a Butembo clinic with several infected patients, "and a gunfight ensued. Some infected patients ran away in order to escape the gun battle."

The jihadi ADF was likely responsible for the attacks.

Medical aid agencies in eastern Congo contend local police and the Congolese Army are not capable of defending the clinics and medical personnel.

ADF jihadis must be pleased with that perception.

But good guys get a say. Though the epidemic has not abated, the Congolese government and WHO epidemic containment efforts have been generally successful.

The UN says it need additional resources (to include medical personnel) to contain the virus and keep it from spreading to neighboring countries.

To promote that good end, UN peacekeepers in Congo need to eliminate several hundred ADF jihadis -- for the good of your health and humankind.