Austin Bay
|
Posted: Dec 26, 2018 12:01 AM
Share   Tweet
The opinions expressed by columnists are their own and do not necessarily represent the views of Townhall.com. 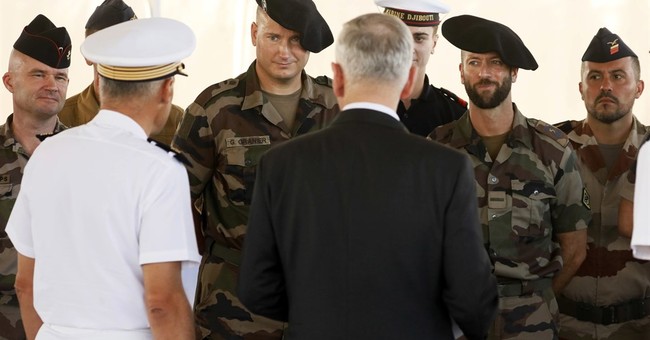 In 2005, I showed up at Camp Lemonnier, the American military base in the East African nation of Djibouti. As I joked in a column published that year, Djibouti is one of Earth's hard corners few people can pronounce and still fewer visit.

Located on the Horn of Africa, Djibouti's neighborhood is violent. Ethiopia, Eritrea and Somalia are close by, tragic Yemen across the Red Sea. In 2005, war and atrocity savaged the region. As 2018 ends, they continue to plague it.

I asked the U.S. Marine colonel escorting our group to describe the U.S. military's mission in the Horn of Africa. He replied softly and firmly: "We're involved in waging peace." He wore camouflage BDUs -- battle dress uniforms in military lingo. But he meant what he said.

However, the phrase "waging peace" had for yours truly an ironic echo. I'd heard it in late February 1990, three short months after the Berlin Wall cracked. I'd been part of a panel discussion with several other writers. I believe the audience was predominantly students. I remember getting a question about German reunification and the possible end of the Cold War.

Alas, when I left the auditorium a woman intercepted me in the hallway. She wore hippie regalia, circa 1968, bandana, faded jeans, and a dyed pearl-button shirt. She smiled a crooked smile then unloaded with smug glee, "You write books about war, right? With the end of the Cold War and so many people waging peace, I guess you'll have to find another subject, eh?"

This thought flashed through my mind: "Korea -- that unfinished Cold War could explode as we speak." But with two kids at home, I didn't have six hours to catalog the wars haunting her dawning age of bliss. I kept my reply civil, sincere and accurate, "Well, ma'am, it's quite a hazardous form of peace."

Her lips pursed. I circled the confrontational peace-wager and went home.

The peace-wager's hallway ambush has appeared in a pair of previous columns mulling peace creation and maintenance. But the anecdote also serves as a dramatic reminder to readers of the 1990s' carnage. That's why I included it in the introduction to my latest book, "Cocktails from Hell: Five Wars Shaping the 21st Century" (Bombardier Books).

Within six months of February 1990, Saddam Hussein invaded Kuwait and ignited a major war in the Middle East. Within 16 months, Yugoslavia fragmented into a nest of small wars and genocidal slaughter. A decade of dirty little wars and terror followed.

Compare the Marine colonel and the (as indicated by her behavior) political peace activist. Which one waged peace, at least in ways of securing two conditions fundamental to physical peace, stability and safety?

I believe the answer is the Marine colonel and the soldiers, sailors and marines in the joint force at Lemonnier. However, "waging preventative war" might more aptly describe the U.S. Djibouti task force's mission. The outfit conducted counter-terror surveillance operations throughout the region. It supported Indian Ocean anti-piracy operations and sometimes conducted operations against al-Qaida in Somalia.

What had the peace-waging ambusher done other than indicate she possessed a utopian ideal whose time had come? Based on her in-your-face confrontation and years of television coverage, carrying protest signs and shouting at veterans are reasonable speculation.

However one defines peace, as a rare condition on Earth or as a philosophical ideal, conflict is endemic to our species. The poet Petrarch wrote: "Five great enemies to peace inhabit within us: avarice, ambition, envy, anger and pride. If those enemies were to be banished, we should infallibly enjoy perpetual peace."

Indeed -- the clash of competing or incompatible human desires is a deep and difficult to resolve aspect of the problem of creating and maintaining peace. Worth remembering as we hope for peace on earth.