Time for a Free World Bullet

Austin Bay
|
Posted: Jul 26, 2017 12:01 AM
Share   Tweet
The opinions expressed by columnists are their own and do not necessarily represent the views of Townhall.com. 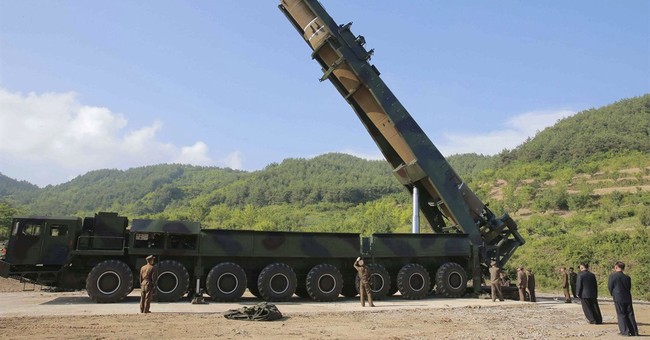 The allies should use their anti-missile missiles to intercept a North Korean ballistic missile test launch. Whatever its operational code name -- Operation Return Of Serve is amusing -- intercepting a Pyongyang missile test has military and political utility.

North Korea's regime, led by rotund dictator Kim Jong Un, has invested its scant resources and Kim's personal prestige in its weapons programs. The regime has bet on strategic policy of implacable belligerence backed by the development of long-range offensive missiles and nuclear weapons.

North Korea subjects South Korea to sporadic but violent acts of outright war, such as the March 2010 sinking of the South Korean Navy corvette Cheonan. That is implacable belligerence. Its missile and nuclear weapons technology is steadily improving.

The great Chinese strategist Sun Tzu wrote: "What is of supreme importance in war is to attack the enemy's strategy." Operation Return Of Serve attacks the Kim regime's strategy using defensive weapons.

In 2011, North Korea accelerated its offensive missile program. In 2012, Japan vowed to intercept a test missile should it intrude on Japanese territory. In March, three slammed into Japan's maritime exclusive economic zone. Though the missiles violated Japan's EEZ, Japan didn't shoot because they didn't strike land. Pyongyang claimed that test was "practice" for destroying American bases in Japan -- which means it had a land target in mind.

Guam, however, is an interim target. In 2013, North Korea released a photo displaying a missile strike plan targeting Honolulu, Los Angeles, Washington and Austin, Texas. The Hwasong-14 missile tested July 4, 2017, had technical features associated with intercontinental ballistic missiles. It may be able to hit Hawaii.

The current U.S. ABM system in East Asia is a "thin shield" and has many limitations. Yet the Patriot PAC-3, THAAD and SM-3 combination provides a layered defensive system that has a high probability of intercepting a North Korean ballistic missile, especially a test.

The Pentagon has been reluctant to operationally expose missile defense "sensor and shooter" capabilities. However, an intercept has military dividends. A sailor's operator error led to the June 2017 SM-3 ABM test failure, not sensor or weapon malfunction. Intercepting a North Korean test gives ABM crews an opportunity to train under operational conditions. The time to make mistakes is when the missile targets empty sea, not a city.

The intercepts will enrage Kim Jong Un. Good. Kim has a bloated ego. He responds to the slightest disrespect, like John McCain calling him a "crazy fat kid," with grandiose tantrums. His regime called McCain's quip a "grave provocation, little short of declaration of war." As Pyongyang saw it, McCain attacked Kim's "face." But in Pyongyang, face, culture and totalitarianism entwine. You didn't mock Stalin and Hitler, you don't mock Kim.

Which is precisely why you mock him now, while he lacks ICBMs and operational nuclear warheads. Knocking his precious missiles out of the sky mocks him with technology he cannot match. His bet on strategic belligerence and offensive missiles is trumped. Could that weaken his hold on power in Pyongyang? Who knows. If he responds with an artillery barrage on Seoul, he is responsible for starting the land war -- and he will pay for it.

Matt Vespa
Will New York Democrat Pay the Price in the Polls for Her Remarks About Biden Running in 2024?
Rebecca Downs

FBI Had Rat Near Trump That Led to Mar-A-Lago Raid
Townhall
Ad from Donald Trump about Letitia James shows why pleading the Fifth was a good move
Twitchy
REPORT: FBI 'Informant' Behind Trump Raid, Was Someone in His Orbit
Redstate
Donald Trump Punches Back With 'Witch Hunt' Videos and a Huge Announcement
PJ Media