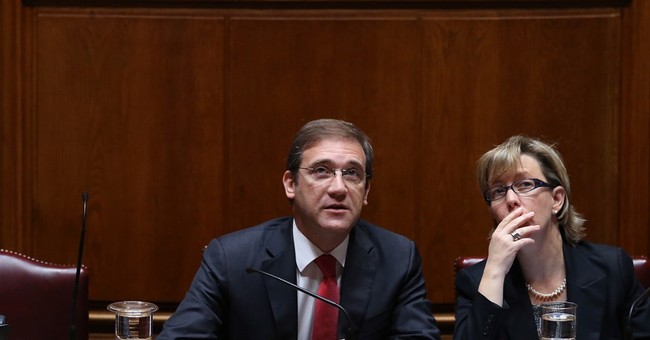 That remarkable Portugal Ahead coalition, formed by former Prime Minister Pedro Passos Coelho's Christian Democrats in partnership with the PSD, had done what many thought impossible. Formed during the 2011 economic crisis, the coalition saved Portugal from Greek-style economic ruin.

Passos Coelho himself addressed Portugal's economic woes honestly and soberly. In 2011, Portugal needed a $118 billion emergency loan from eurozone members and the International Monetary Fund. The coalition committed itself to remaining in the eurozone and the European Union.

Instead of playing the Greek game of demanding more loan money, the coalition emphasized private-sector growth, cutting excessive public-sector expenditures and work ethic. Over time, these policies would reduce the debt burden. Wonder of wonders: By 2015, the Portuguese government was creditworthy.

Good news? Yes, a partial success but also genuine. Credit the Socialists with helping secure it.

Which is why an ugly political message sent by Portugal's impending governmental change is that it appears no good deed for long-term economic benefit will go unpunished -- at least when power-hungry populist politicians can stoke and exploit resentment and anger.

This is a chilling signal in a world plagued by big debt.

A second ugly message from the Portuguese: To obtain power, a certain kind of politician will sell out what five weeks ago (prior to the Oct. 4 national election) were bedrock, nonnegotiable party principles of long standing.

"So what?" realists and cynics yawn. A political sellout isn't news.

Big debt isn't news, either. However, this elephant in everyone's body politic and in everyone's wallet has become the world's greatest strategic security threat. Greece is the headline basket case, but big debt threatens the U.S., as well. Domestic instability has a tendency to escape national borders and become an international security problem.

Passo Coehlo's coalition had the courage to acknowledge it.

In the October election, his party got the most votes. However, its 38 percent share translated into 104 of Parliament's 230 seats, short of a governing majority. Its coalition partner, the Socialist Party, finished second, with 85 seats -- which is more than enough to run Parliament.

Costa now says he is against austerity. "Austerity" has become the common media term for opposition to eurozone-led reform of debt-ridden member economies. Greek populist politicians of the left and right use it to imply outside forces are imposing poverty on their sovereign nation. In other words, it is a populist "us vs. them" narrative.

However, the truth is that Greece has been living on money borrowed from other eurozone nations. Citizens of these nations -- particularly those of Germany and France -- will no longer permit it.

In 2011, the PSD agreed that it would work with the Christian Democrats to meet eurozone reform requirements. Like Germany's Social Democrats, the PSD is a pro-EU, pro-eurozone and pro-NATO party.

Or it was. Now that he is "anti-austerity," Costa has two anti-eurozone and anti-NATO allies, the Communists and the Left Bloc. Along with Portugal's tiny Green Party, this leftist coalition has 122 votes in Parliament.

Costa will very likely be the new prime minister. He has issued a 138-page political and economic document, which claims the new government will not only end austerity but also cut the budget deficit by 2019. Portugal will remain in the eurozone. However, his new allies demanded that public-sector salaries rise, and indeed they will; pensions will also increase. Yes, Costa will do everything and please everybody.