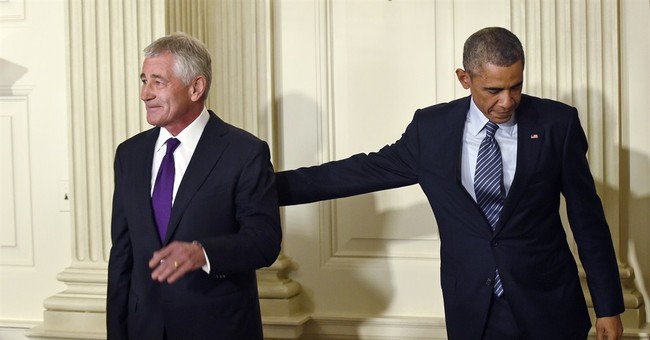 Trending
President Barack Obama has fired Secretary of Defense Chuck Hagel. The Beltway clerks and pundits tell us Hagel is a political scapegoat, a sacrifice to Obama's electoral drubbing.

This explanation may be accurate, at least in part. Removing a senior cabinet member is an inherently dramatic gesture. It can signal the president's intent to rectify a problem or to promote new thinking.

Mentioning the Benghazi consular attack of 9/11/2012 incites argument. However, the Obama administration's immediate political operational response to Benghazi provides an instructive example of "personalizing drama" and blame as an operational scheme.

Everyone now concedes that a terrorist militia planned to attack the U.S. consulate on 9/11/2012. Ansar al-Sharia conducted a planned act of war. However, in the wake of Benghazi, the Obama Administration introduced a scapegoat: Nakoula Basseley Nakoula. Nakoula was a crank from California who had directed an anti-Muslim Internet video. For weeks the Obama administration focused blame on Nakoula. There was no security breakdown in Benghazi. There wasn't a planned terrorist attack. Nakoula's video had insulted Islam and inflamed passions. A riot ensued. It was our fault ... somehow.

Drama with a personal face submerged relevant national discussion over the threat posed to U.S. interests by al-Qaida-linked Islamist militias in Libya -- and that was the Obama administration's goal. This and other administration-flogged blame tales obscured media discussion of the radical Islamist revival occurring in Eastern Syria. Until the 2012 presidential election was over, the attention of the American public had to be emotionally displaced from difficult international security issues that require hard decisions and follow-through implementation.

Hagel's predecessors as SecDef, Robert Gates and Leon Panetta, were skilled administrators and svelte Washington operators, definitely up the task of overseeing the Pentagon bureaucracy. Both had lifelong interests in defense issues. Gates brought a special intellectual spark to the office.

In comparison, Chuck Hagel was missing a couple of spark plugs. A man given to mangling words and mangling geography.

Gates and Panetta demonstrated a commitment to U.S. defense, a commitment beyond dramatic gesture. Their post-Pentagon assessments of the Obama administration are both scathing. They see Obama as a political leader focused on his own political welfare. Obama is fixated on two figurative battlefields: domestic U.S. social justice/identity politics and the next news cycle. He is very good with words. He is very good at winning presidential election, but as for other deeds? Not so much.

To his credit, Hagel also demonstrated a commitment beyond gesture. Obama dismissed the Islamic State as a junior varsity. Hagel described it as a dangerous and expanding threat. I think Hagel was voicing the sober conclusions of our varsity, the Joint Chiefs of Staff. Hagel warned the White House and Congress that current anti-Islamic State efforts were, at best, borderline effective.

A SecDef serves at the president's pleasure. Contradicting your boss has risks, especially a boss with a brittle ego. Hagel is gone. The Islamic State, however, remains. The Islamic State will have to be convinced it's a junior varsity. Vladimir Putin is a big-league player; he persists in waging an imperial war in Eastern Ukraine. China probes its Southeast Asian maritime border. Iran's quest for nuclear weapons continues. Syria bleeds. Libya fragments. North Korea builds ICBM's. Unless backed by demonstrated capabilities and the demonstrated will to act, dramatic gestures and words in the Washington Beltway do not affect these circumstances a whit.