Building an Army Under Fire 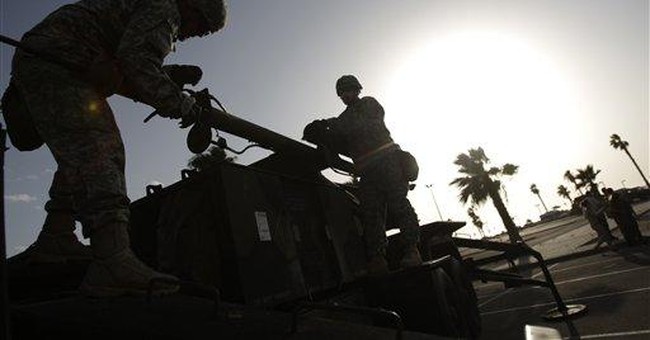 Maintaining a competent military organization is a challenge for wealthy nations, even in times of relative peace. Bureaucrats and politicians hijack budgets as politically connected officers wrangle promotions at the expense of creative, forward-thinking war-fighters. War reveals the organizational corruption, stagnation and decay, and this institutional decline exacts a stiff price in soldiers' sweat and blood.

The "rich man's security challenge," however, pales when compared to the multidimensional security problems of the impoverished, fractured and terrorized. Afghanistan is a pertinent case, but only one of many on the planet. Africa has at least a score of different-yet-similar situations -- the different being varied cultural and historical contexts; the similar being embittered factions (ethnic, religious, ideological), weak government institutions, corruption, violence and lethal weaponry.

The United Nations' attempts to forge an effective national army in the Democratic Republic of Congo is one example. Burundi is another, where building a new military requires slowly dismantling the old Burundian Army (an institution once dominated by the Tutsi tribe) and integrating former Hutu guerrillas into its ranks.

Creating a disciplined army in a country like Afghanistan, which confronts terrorist assaults, tribal guerrilla attacks, criminal intimidation and political fragmentation is difficult, but it is not a new difficulty and it is not an impossible task. The process however, is time-consuming, requires extraordinary patience and flexibility, and moreover requires balancing the immediate demands of the ongoing war with achieving long-term goals.

Achieving that balance between the immediate needs and the long-term good is always tough. During the American Revolution, George Washington understood his army's mere existence was a strategic strength, and that his inadequately equipped and spottily trained forces had to be used wisely.

Washington fought 220 years before the advent of the 24-7 news cycle. After a week of frost-bitten video from Valley Forge, the strategic geniuses at ABC, NBC and CBS would have demanded Washington's resignation -- and then become colonial subsidiaries of the BBC.

In the aftermath of Turkey's defeat in World War I, Kemal Ataturk, the key nationalist leader, faced the problem of reconstituting a credible military in the midst of Allied occupation. Ataturk had Turkish Army forces in eastern Anatolia as a cadre for a new organization, but even that formation was plagued by Allied control officers attempting to disarm it.

When Greek forces attacked Anatolia (after occupying Smyrna/Izmir), despite public clamor for a counterattack, Ataturk chose to delay the Greeks then pull back because his new army lacked training and weapons. That took foresight and enormous political will.

The process of building a military organization would be long and slow even if immediate security needs are met and worried politicians placated, as creating human skills and individual and group confidence in those skills is the core of the process.

In Afghanistan and the Congo, foreign trainers confront not only linguistic problems but illiteracy. Learning to use modern weapons and communications gear becomes much more difficult if the soldier is illiterate -- and some systems absolutely require literacy and numeracy.

Afghanistan is entering its fourth decade of war, and that means for two generations basic education has been an afterthought even in the cities. According to StrategyPage.com, only 25 percent of Afghan recruits are literate. However, "NCOs (non-commissioned officers -- i.e., sergeants) need to read," StrategyPage says. This is why U.S. training programs in Afghanistan include literacy classes.

StrategyPage is making a classic point: Effective ground units must have trained and effective NCOs. It takes years to produce these leaders. Surviving combat accelerates the process, but the cost is measured in casualty-causing mistakes.

Snap critics of the training effort in Afghanistan rarely acknowledge Afghanistan's complex context. Afghan Lt. Gen. Sher Mohammad Karimi understands it, and he sees measurable success in dire circumstances. Karimi was the first Afghan to graduate from Sandhurst, was jailed by the communists,and lived in Pakistan until the Taliban's fall in 2001. "We have a very weak economy, and we have been at war for the past 30 years," Karimi recently told Radio Free Europe. "We are now moving forward with international help, and over the past eight years we built the military from zero to having 95,000 soldiers now."