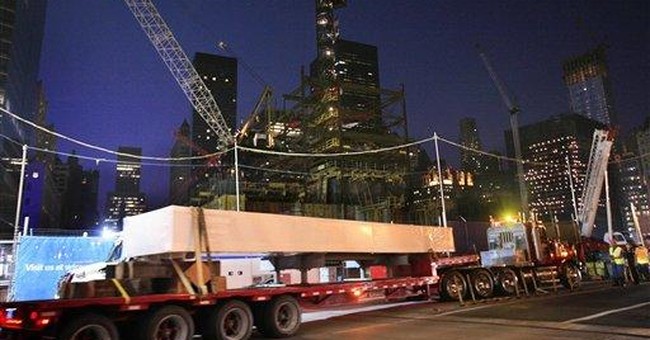 Yet Poland continued to resist. Britain and France joined the war on Sept. 3. Sept. 17, however, sealed Poland's fate, as Russian forces invaded eastern Poland -- the "stab in the back" by Joseph Stalin. Poland collapsed.

The sensation, however, that Poland had succumbed to a "new kind of war" shocked a world still mired in World War I, where bunkers, trenches and firepower stymied offensive operations. From 1919 to 1939, France and Britain had prepared for a repeat of "the last war," with France's Maginot Line the literally concrete expression of that preparation. The Maginot Line was a bunker complex perfected, complete with underground train lines and turreted artillery covering broad minefields.

German Nazis touted the blitzkrieg's success as an example of Teutonic superiority. They also delighted in the terror blitzkrieg sowed. The Stuka divebomber had a siren that emitted a piercing scream as the plane plunged toward the earth -- a psychological weapon intended to frighten troops beyond the blast of the bomb.

German "storm troop" infiltration tactics used in 1918 are a blitzkrieg predecessor. However, improved communications was the key to "new war." Radios linked the tank on the ground with the aircraft and with commanders. During the interwar years, officers in several nations (including Britain, France and Italy) understood the power of this network. Germany, however, acted on the ideas.

To the awed press and stunned populations, the blitzkrieg that devastated Poland appeared to be a "magic bullet." When Germany attacked France in May 1940 and flanked the Maginot Line by invading the Low Countries, the dark magic worked again. In 1941, the magic seemed to work in Russia, as panzer spearheads approached Moscow.

Then the magic began to fade.

A technological or organizational edge in warfare (a "magic bullet" or perfect weapon) is always sought, but the advantage is never permanent. From 1945 to 1950, the U.S. thought it had the ultimate weapon, the A-bomb, but then Russia got one.

The fraternal twin of the magic bullet quest is "the last war" mentality, for both can distort a government's (or terrorist cell leader's) estimate of an emerging challenge. Wounds physical and social from World War I traumatized the French public, so France built the Maginot Line, the ultimate weapon for that "Great War."

There is a segment of the U.S. population that sees every U.S. war as "Vietnam," which is ludicrous but has emotional traction and hence political effects. Many Russians still view the West through a Cold War lens, and at times Vladimir Putin's sly government encourages their fears.

The War on Terror has given the U.S. military and intelligence services another lesson in anticipation and adaptation. America did not anticipate 9-11. That September day, al-Qaida attempted a "psychological blitzkrieg" when it used jumbo jets as ICBMs then followed up with a global propaganda campaign designed to magnify the terror (global media providing the siren on the Stuka).

Germany's blitzkrieg was trumped after a long, hard slog that required blood, sweat, toil and tears. Al-Qaida's psychological blitz failed -- we are in another hard slog.

The wars the Nazis and al-Qaida launched both changed in ways their leaders never anticipated. The Nazis underestimated British, Russian and Yugoslav adaptation and perseverance. Al-Qaida completely misunderstood American capabilities and stamina, but also grossly misjudged its own political appeal. Moreover, the psychological edge of their September surprises eventually eroded.

FiveThirtyEight: Herschel Walker's Abortion Fiasco Isn't a Scandal
Townhall
Did the AP think they wouldn't get caught red-handed trying to push blatantly false narrative about Ron DeSantis' leadership?
Twitchy
Katie Hobbs a No-Show at Hispanic Town Hall, as the Podium Next to Kari Lake Was Left Empty
Redstate
Here's What Happened When a Concerned Mom Dressed Like Drag Queen at a School Board Meeting
PJ Media