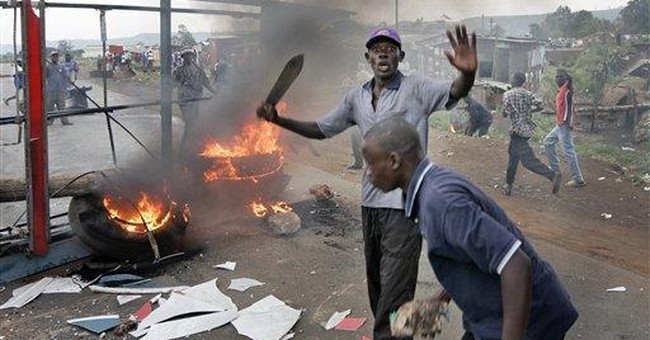 Kenya's crisis, however, "has mutated from an electoral dispute into much deeper problems with a high potential for recurrence," former U.N. Secretary General Kofi Annan told a reporter with Nairobi's East African Standard. Annan went to Kenya to try to mediate the political dispute and calm violent tribal passions.

All too often in the developing world tribes and ethnic groups form the core of political parties. With ethnicity for tinder, minor political squabbles -- much less issues involving the control of national institutions like a presidency -- risk igniting deadly ethnic conflict.

Diplomats and cooler Kenyan leaders are trying to confine the ugly violence. Kenya matters. Kenya has provided a stabilizing political influence in a war-wrecked region -- violent conflicts tear its neighbors Sudan, Somalia, Ethiopia and Uganda. Kenya has been a reliable American ally, with its port of Mombasa welcoming the U.S. Navy. It is a regional economic powerhouse. Still, the inter-tribal violence recalls impoverished Rwanda and its ghastly 1994 genocide.

While an intense media spotlight certainly doesn't stop violence in some circumstances, it can have a dampening effect. Kenya, with its comparatively free press and relatively high literacy rate, may be one of those circumstances where shameful images of self-destruction and eloquent pleas for restraint reinforce the sensible.

Charges of cronyism and corruption tag Annan, however, the United Nations' fraud-riddled Oil for Food program being the most noxious case in point. Annan mentioned "deeper problems" and doubtlessly referred to Kenyan tribal divisions. But tribal cronyism and its frequent companion, debilitating government corruption, are also deeper problems that stunt Kenyan modernization and exacerbate the current crisis.

In the past, both Kibaki and Odinga have professed anti-corruption agendas. In the 2002 presidential race, Odinga supported Kibaki. Last year, Odinga denounced Kibaki's failure to control corruption and ran a populist campaign that targeted "the wealthy." Odinga is from the Luo tribe. Kibaki is a Kikuyu. In the election aftermath, it appears that to some ethnic Luo rioters "the wealthy" may be a code word for Kikuyus. The Kikuyu are Kenya's "business tribe," and tend to be wealthier and have more access to education opportunities. The Kikuyus' critics charge them with cronyism. The Kikuyu respond that their success incites envy.

Sensational comparisons to Rwanda's 1994 nightmare neglect the vast difference in scale. Eight hundred thousand died in Rwanda's genocide. Up to this point Kenya's death toll is between 600 and 700. Yes, that's a terrible bloodletting and a warning, but also establishes perspective. Demonstrations continue nationwide, but the worst violence remains localized. Annan wants to help keep it that way, and there is time to encourage sober compromise.

As for the future? There is cause for hope. On a visit to Kenya six years ago, I acquired a copy of "Inside Sudan: The Story of People to People Peacemaking in Southern Sudan." Published by the New Sudan Council of Churches, the book described in detail peacemaking strategies pursued in the midst of southern Sudan's complex tribal and religious war.

The strategies included using tribal reconciliation rituals to coax tribal leaders into negotiating or to help amenable leaders draw antagonized and alienated tribesmen into a peace process with their enemies.

The book was published in Nairobi.