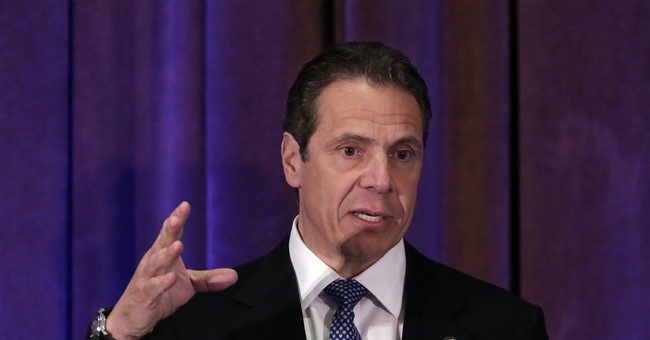 As New York Governor Anthony Cuomo fast-tracks his arbitrary wage increase targeting the state’s fast food industry, scarce attention has been given to the actual language in the proposal. Cuomo, of course, hastily created the Fast Food Wage Board soon after an error-ridden op-ed appeared in the New York Times. The non-legislative board held its first meeting last week as it determines an "adequate" wage for fast food workers in the Empire State. Acting Labor Commissioner Mario Musolino, who is overseeing the three-member kangaroo court, set forth a definition to guide its efforts. Musolino has said that “fast food chains” refers to “limited service restaurants, where customers order at the counter and pay in advance, which are large chains with multiple locations nationally.”

Anyone who has spent time interning in a legislative office might suspect that Musolino’s definition of a fast food chain is overly broad and capriciously vague—and they’d be right. Put aside the traditional fast food brands and consider for a moment how many restaurants require upfront payment at a counter and deliver food or drinks to customers afterwards. The result is that New York’s venti wage increase just got a double-shot of ubiquitous government overreach. As for Musolino’s reference to multiple locations, Merriam-Webster tells us that multiple means more than one. And what exactly does it mean to be a restaurant of “limited service”? We can assume it is meant to refer to counter service versus table service. If employees serve food to customers seated at tables, the business may be exempt from the wage increase. If customers order and receive food from a counter or drive-thru window, the business is henceforth a fast food restaurant. So does a restaurant with a bar or a diner – essentially a counter – count? What about restaurants where customers pay at the counter but a server delivers the food to a table? Is it limited service if the business offers cheeseburgers but no fries, just chips? No Coke – Pepsi?

This semantic exercise is moot, of course, because New York’s Fast Food Wage Board wasn’t created to craft sound policy. Instead, the panel was created and purposed with targeting the very same companies at the center of the campaign being led by the Service Employees International Union (SEIU). The SEIU has spent nearly $50 million on its arbitrary “Fight for 15” movement in an attempt to organize large numbers of fast food employees while eroding the industry’s franchise model. McDonald’s has taken the brunt of the SEIU’s assault, with worker centers such as “Good Jobs Now” and “Fight for 15” serving as the face of the campaigns, but other brands are just as susceptible.

In fact, the campaign against McDonald’s is just a means to the end for the SEIU. Like the UFCW’s decades-long battle against Walmart, labor leaders will simply go after the biggest non-union target – whoever that may be – in order to gain leverage over the rest of the industry. So while the New York wage board has McDonald’s in its crosshairs, the net has been cast wide enough to impact countless other brands and companies, even those small businesses that have made the critical mistake of opening a second location.

Rest assured that no one in the Cuomo administration or at SEIU headquarters is losing sleep over the wage panel’s vague definition of a fast food chain. The SEIU relies on ambiguity as the bedrock of its campaigns. It conducts polls and funds “studies” that would fail a freshman statistics class. It lobs unsubstantiated claims at union targets without hesitation. And it funds “worker-led” grassroots campaigns that are neither worker-led nor grassroots. Using smoke and mirrors to create an illness, union leaders then diagnose themselves as the only cure.

Granted, the New York wage panel will supposedly further “flesh out” the definition of a fast food chain, but don’t assume the language will get any more specific than is desired by the SEIU. The union, which holds a seat on the three-person panel, will push for the broadest possible definition that suits its purposes. If the wage board decides that it wants to avoid vague language and be as accurate as possible in drafting the new mandate, then undoubtedly the best possible approach is to draft the definition so that a wage increase would only apply to those employers being targeted by the SEIU.

Ashley Pratte is a senior adviser to Worker Center Watch