The Day The Wall Came Down 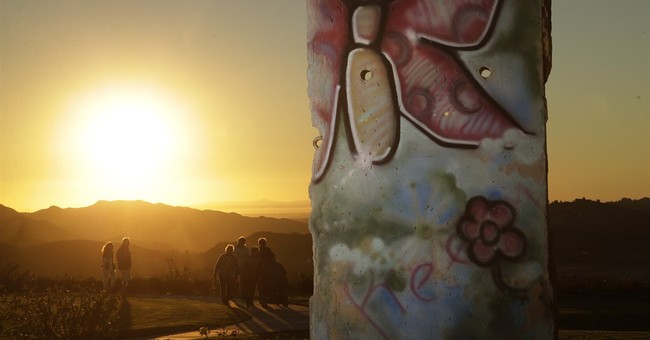 Sunday marks the 25th anniversary of the fall of the Berlin Wall—the day that freedom persevered.

President Reagan is best known for his stance against communism when he made one of the most memorable statements in history: “Mr. Gorbachev, tear down this wall!” The Berlin Wall stood as a stark symbol of the Cold War between the United States and Soviet Russia, but it was America’s dominance that was solidified when the wall came down.

Now, we have a Russian leader who wields his power without fear of consequence. President Obama did not take a strong leadership role when Russia seized Crimea nor did he sanction Russia for their behavior. The United States response to Russia’s actions in Ukraine was extremely ineffective and did nothing to contest Russian aggression.

During Obama’s Presidency, there has been scandal after scandal: Benghazi, IRS targeting of conservative groups, NSA spying on American citizens, and the release of five known Taliban terrorists in exchange for a soldier with questionable loyalty to the United States military. This administration continues to make excuses for their actions and demonstrate their incompetency in handling issues of national security.

President Reagan was a strong believer in American exceptionalism, a notion that has gone by the wayside under the current administration. Consider the current state of affairs with the rise of ISIS and the growing threat of terrorism. Ronald Reagan advocated for “peace through strength” and was a true leader when it came to protecting America from her enemies.

Next week college students across the country will participate in Freedom Week, a week dedicated to shining light on the evils of communism. Students will be building “mock” Berlin Wall’s on their campuses and enlightening peers on the significance of the fall of the wall—more importantly the victory over communism.

President Reagan said, “We want our national policy to be based on what we know in our hearts is morally right.” We need to reestablish President Reagan’s vision for America, and we need to stop leading from behind. This Sunday, we remember President Reagan’s lasting accomplishments and hope that American exceptionalism will one day be restored.