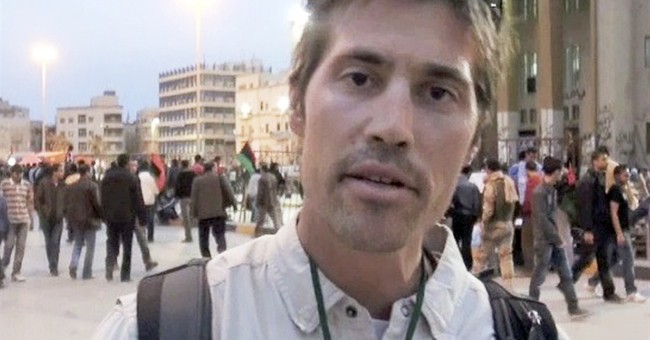 In the wake of the gruesome beheading of American journalist, James Wright Foley, it is important to remember that the growing threat of radical Islam is very real.

Next month will mark 13 years since the tragic terror attacks on September 11th, 2001 as well as two years since the attacks in Benghazi. Evil is real and the threat of terrorism exists.

With growing unrest in the Middle East as well as other international crises, it is imperative that we are active in our efforts to combat these threats and to send a message that America is truly exceptional.

Since 2003, student activists at more than 200 schools across the country participate in Young America’s Foundation’s 9/11 Never Forget Project each year. The students proudly display 3,000 flags on their campuses in order to remember the innocent people that were murdered at the hands of radical Islamists. This project is designed to create awareness and to show the world what makes America great is our resilience.

This millennial generation is a generation that weathered the tragedy of September 11, but refuses to be defined by it. Many college-age students today were around seven years old on September 11, 2001 and the reality of that day had a very real impact. We need to remember 9/11 for what it was, an act of terror by radical militants who hate America. If we allow people to forget what happened, the radical Islamists win.

During a time when our country has become so politically correct it is hard to find campuses that have their own 9/11 memorial services let alone any projects that commemorate the American lives lost. The misrepresentation of 9/11 does not do justice to the significance of that day.

If it weren’t for young conservative activists 9/11 would pass by unnoticed by most students on college and high school campuses nationwide. Schools largely ignored the anniversary of 9/11 and even worse some professors blame America for the attacks. The Obama administration has even tried to change the meaning of 9/11 by turning the anniversary into a politically correct “national day of service”. They would likes us to forget not just the nature of the attacks, but how the Left denounced our country just days after when many Americans were coming together in community to showcase their patriotism.

Our country, now more than ever, is in desperate need of leadership. We have a President who consistently leads from behind when it comes to foreign policy. It is the brave men and women who are willing to take a stand for freedom that are truly leading by example.

They cannot silence us, they will not win, and America will continue to be the shining city upon the hill as President Reagan once said. May we never forget and may we never stop fighting for justice. We will not be defeated, we will stand up, and we will continue defend freedom in the face of evil.