Check Your Privilege at the Door—Harvard’s New Orientation Requirement 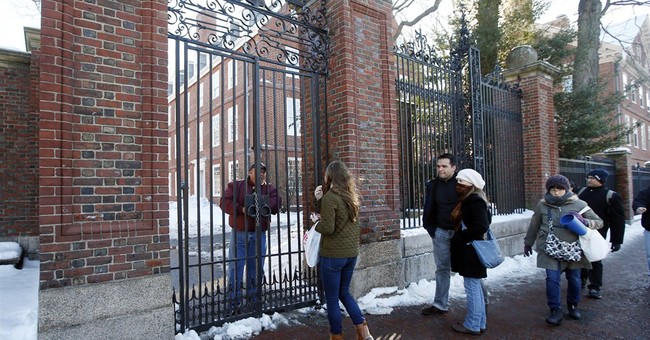 Harvard’s Kennedy School of Government is now requiring all first year students to undergo a course titled “checking your privilege” as part of their orientation.

As if this requirement doesn’t seem preposterous enough, the school also wants to move toward training faculty and administrators in privilege and power too.

This requirement comes after a controversial yet popular op-ed penned by a student at Princeton where he stated the term “check your privilege” is detrimental to students. Students are being asked to consider how their good fortune might impair their ability to empathize with others. Why is it that we are asking students to apologize for or to analyze their accomplishments and successes?

This nation was founded in order to allow for competition and a variety of ideas. If we are supposed to all think alike and apologize for our upbringing and abandon our identity in order to be equals—what makes us unique from one another?

This requirement is just another liberal initiative—it should be called out for what it is—intolerant. We should celebrate successes and not adjust our identity to conform. This initiative is an insult to the very idea of the American Dream, where one can pull himself up by his bootstraps and find success—now we all need to be on the same playing field with the same opportunities.

Campuses are cesspools of intolerance with professors and administrators promoting liberal ideas and political correctness in higher academia. Colleges and universities are supposed to be hubs of tolerance where a diversity of ideas and opinions should be encouraged but lately it seems as though only one opinion can be expressed.

At Young America’s Foundation we help students bring conservative speakers to campus and more often than not these events and speakers are protested or met with a challenge by the administration. Why is it that liberals cry for tolerance and “checking privilege” at the door yet they don’t allow for tolerance of conservative opinion or for conservative voices to be heard?

Students at many campuses are having their free speech rights restricted, are indoctrinated by their professors with leftists ideas in the classroom, and even expected to undergo “sensitivity” trainings. This is not isolated—there is widespread liberalism on college campuses and it is time for college administrators to stand up show real leadership.

The Left claims that they want to celebrate and encourage diversity yet they don’t encourage and refuse to recognize the value in celebrating different backgrounds—even ones of privilege. Everybody has a story to share and to assume that students who come from “privileged” backgrounds are in some way guaranteed more opportunity is absurd. The idea that anybody from anywhere can be afforded opportunity is the cornerstone of our great nation.

College years are formative years where young minds formulate opinions on the world around them—to only be exposed to certain views and encouraged to think one way, is detrimental to our students. Liberal initiatives such as “checking your privilege” only hurts the future generation because they will never know the value in celebrating different ideas—what makes this country great.

It took 27 days for CNN to say what they previously accused Trump of lying about
Hotair
Two Fateful Events Occurred on January 15 Which Changed America for Years to Come; One Glaring, the Other Quiet
Redstate