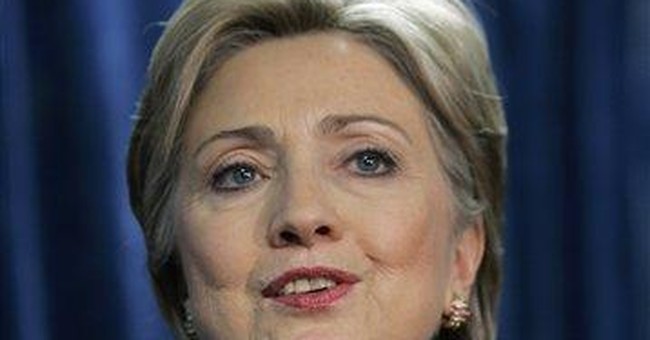 By all measures, Hillary Clinton has an excellent chance of becoming America’s first woman president. After defeating a slew of male candidates in the Democratic Primary, she’s now edging out Barack Obama, whom she leads in most polls. Predictably, the feminist establishment—taking a break from scouring Super Bowl commercials for something to be offended about—is positively giddy about Mrs. Clinton’s candidacy.

“I'd go anywhere, any time, to shout from the rooftops that Hillary Clinton is the right choice,” Kim Gandy, president of the National Organization for Women, wrote on Monday. Gandy assured her feminist friends that Hillary is “one of them.”

Actually, she’s not. Hillary might have been called “The First Feminist” during her years in the White House, but she moved on a long time ago. While she agrees with the feminist establishment on most issues, such as health care and reproductive rights, Hillary clearly does not share their attitude. She knows that feminists—particularly feminists who whine incessantly about gender oppression—don’t win elections.

Hillary’s mindset has changed remarkably since Bill first ran for president in 1992. Back then, she made a big show of asserting her independence from her husband, insisting on being called Hillary Rodham Clinton. When a reporter asked the First Couple about their marriage, Hillary snapped, “I'm not sitting here as some little woman standing by my man like Tammy Wynette.”

Displaying the feminists’ trademark condescension toward women who don’t fit their model of liberated living, Hillary copped an attitude whenever reporters asked about her high-powered career as a lawyer. “I suppose I could have stayed home and baked cookies and had teas,” she said.

Remarks like those earned Hillary admiration from NOW and Ms. Magazine, but made her vastly unpopular with the average American woman. In a Gallup poll conducted a few years ago, 46 percent of women said they wouldn’t even consider voting for her.

But now that she’s running for president, Hillary has not only dropped the “Rodham” from her name, but her feminist arrogance as well. Instead of making snide comments about women who “bake cookies,” she cut a campaign commercial that showed her cheerfully wrapping Christmas gifts and placing them under the tree. She realizes now that many women find stereotypically feminine activities to be fun and rewarding, not oppressive and demeaning.

Rather than playing the role of the liberated woman who doesn’t “stand by her man,” Hillary lets her husband campaign for her and defend her against criticism (noticeably, whenever the Clintons got into catfights with Barack Obama, the boldest attacks always came from Bill). Despite her careers as a lawyer and U.S. Senator, she now says that being a mother to Chelsea is “the most important job I ever had.”

These days, Hillary doesn’t even recite the usual feminist canards on abortion. In 2006, she maintained a pro-choice position while acknowledging that abortion is a “sad, even tragic choice for many, many women.” This is not the feminist position, which is to claim that having an abortion is good for a woman’s “self-esteem” (I’m not kidding about that: look up the work of feminist researcher Nancy Felipe Russo).

Voters are catching on to Hillary’s attitude adjustment.

“There is a decidedly post-feminist appeal occurring within the Clinton campaign,” one reporter described it. “It features a very different Clinton than the young feminist at Wellesley.” According to political strategist Kellyanne Conway, Hillary knows she needs to “repair the relationship she damaged with America's stay-at-home moms and grandmas, many of whom felt she disapproved of their life choices.”

This is a smart strategy, especially since many famous female leaders of developed countries publicly disavowed feminism. Golda Meir, the first female Prime Minister of Israel, described feminists as “a bunch of bra-burning nuts.” To the horror of feminists worldwide, Meir said the most fulfilling thing a woman could do in life was have a baby. Margaret Thatcher, the first woman to lead Great Britain, famously declared that “I owe nothing to women’s lib.” Thatcher attributed her success to her own hard work, not to the women’s movement.

On the other hand, female candidates who align themselves with the ladies at NOW typically share the fate of Patricia Schroeder, former Democratic representative from Colorado. Shortly after feminists began hyping Schroeder as “their” candidate, Schroeder tearfully announced that she wouldn’t run for President, saying she hadn’t “figured it out yet.”

Hillary has. Maybe she’s still a feminist at heart, but at least she’s smart enough not to campaign as one.