Aryssa Damron
|
Posted: Oct 03, 2016 12:23 PM
Share   Tweet
The opinions expressed by columnists are their own and do not necessarily represent the views of Townhall.com. 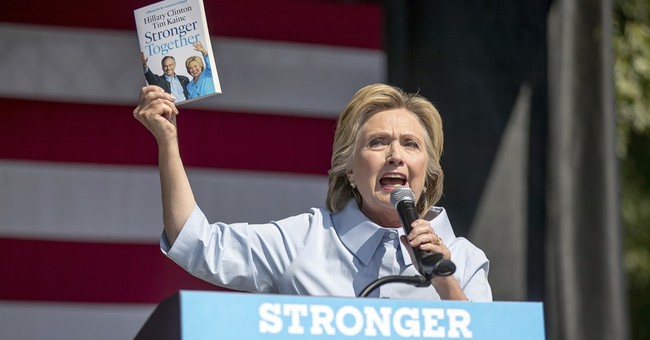 After Hillary Clinton’s bizarre behavior at Ground Zero on 9/11, the media could no longer ignore speculation about Hillary’s failing health. Not long after a fainting spell came claims that Hillary was battling pneumonia. Is Hillary healthy enough to even be running for president, let alone to serve as Commander in Chief? Ed Klein’s brand new book, Guilty as Sin, exposes the Clinton health crises that the media won’t tell you about.

When photos surfaced in February 2016 of Hillary being helped up the stairs by two burly men, people like Donald Trump, Sean Hannity, and other journalists who dared to question Hillary’s health were demonized by the media and immediately labeled as sexist. Clearly, they were only worried about her health because she was a woman.

As Klein’s latest book Guilty as Sin exposes, this was not the first time that Hillary’s health failed in a public place. In 2005, Hillary fainted while appearing before a women’s group in Buffalo, New York, and she fainted again in 2009 while boarding a plane in Yemen. The latter incident resulted in her falling and fracturing an elbow.

In December 2012, Hillary fainted in her Foggy Bottom office at the State Department, just before she was scheduled to testify in front of the Senate Foreign Relations Committee on Benghazi. That incident could not be hidden from the media like so many of her other incidents, because Clinton hit her head and suffered a concussion. She had to be treated in the State Department infirmary before heading back to her home in Whitehaven to recuperate. That was not the end of the story though. Bill Clinton, ever the caring husband, insisted that Hillary be flown to New York-Presbyterian Hospital, where it was discovered that she had a blood clot between her brain and her skull. It was not a simple concussion, though concussions themselves are also extremely dangerous.

Guilty as Sin exposes Hillary’s health for what it really is: a major issue. According to a source close to Hillary quoted in Klein’s book, a tendency to form blood clots was not Hillary’s only medical issue. As many older women do, she also suffered a thyroid condition. A cardiac stress test showed that her heart rhythm and heart valves were torn, which is likely part of an undiagnosed heart condition.

Hillary is going to be furious when she reads that Ed Klein is exposing her medical conditions like no major news outlet dares to. The public deserves to know, though, and she won’t be able to hide behind her team much longer if she keeps fainting in public and claiming that her inability to even walk to a car is a symptom of pneumonia.

The mainstream media may let Hillary hide her health problems, but journalists like Ed Klein are digging deeper, exposing the medical emergencies the media has buried, and shining light on her pathological lies.

Guilty as Sin by Ed Klein is available in bookstores everywhere October 4.