This Christmas, Even in This Dark Time, Enjoy the Light

Arthur Schaper
|
Posted: Dec 25, 2018 12:01 AM
Share   Tweet
The opinions expressed by columnists are their own and do not necessarily represent the views of Townhall.com. 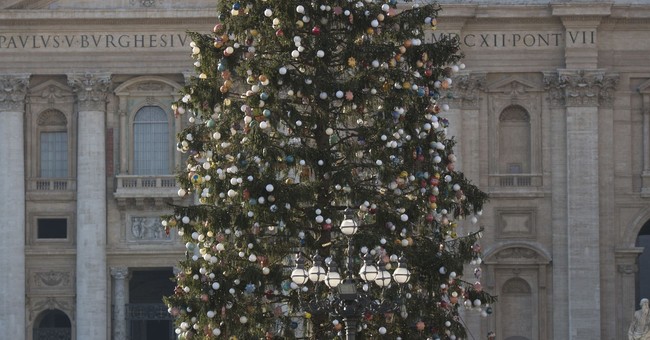 “It’s Christmas! You should rejoice!” The presence of family, presents under the Christmas tree, rocking around to different versions of “Rockin’ Around the Christmas Tree” should encourage everyone to celebrate!

Christmas, a time to rejoice with lights and perfections, can also be one of the darkest times of the year. A close family member—parent, spouse, sibling— may have passed away during this time, and that loss is particularly painful during the Christmas season. There are many alone, homeless, ill. They endure this festive time coupled with their intense, personal privations. For many, Christmas should be a time of great celebration. This pressure adds to their pain.

Christmas has been both a dark time and a bright time for me, too. Some years, there was nothing but joy and victory to ponder from the previous months. Sometimes, it seemed like there was nothing to celebrate.

In the world today, it seems that the shadow of death is not just overcast, but cannot be overcome. Despite victories here and there on the life and liberty front, the forces of evil march on:

Despite these tragedies, all of us need to remember what—or rather Who—this season celebrates.

Christmas is about the Light of the World (John 8:12) who came into this darkness. It’s not about pretending there is no darkness, but about remembering that the world has a Savior to rescue and protect us in the midst of the darkness.

“The people that walked in darkness have seen a great light: they that dwell in the land of the shadow of death, upon them hath the light shined.” (Isaiah 9:2)

“For unto us a child is born, unto us a son is given: and the government shall be upon his shoulder: and his name shall be called Wonderful, Counseller, The mighty God, The everlasting Father, The Prince of Peace.” (Isaiah 9:6)

There are so many walking, stumbling in a dark world right now.

Jesus, the Savior of the World, is also called “Immanuel” which means “God with us”. From the beginning, he entered into darkness, relieving and comforting us in dark places. His birth came at a bleak time, more foreboding than our own. Ruthless Caesars in Rome could force a world-wide census upon numerous conquered peoples. There were no rights for all, but ultimately privileges for “citizens of Rome.” Entertainment was a fatuous bloodsport of slaves butchering each other before mindless crowds.

And yet, in a tiny manger in a forlorn stable in an overlooked city, Christ the Savior was born. The Light of the World came into a world that had no hope, no peace.

This Light guides the souls of millions today, and they are not overcome by darkness:

This Christmas, we may live in a dark world gone darker, but the darkness does not have to overcome us. This Christmas season, ignore the surrounding chaos and enjoy the Light, just as the Israelites in Exodus weathered the plagues, then enjoyed divine light in their homes (Exodus 10:23). Let us rest and receive the true reason for the season, the Light and Savior of the World, God who became a man, the baby born to die that man could be set free from sin and enjoy life eternally.