Arthur Schaper
|
Posted: Jul 12, 2018 12:01 AM
Share   Tweet
The opinions expressed by columnists are their own and do not necessarily represent the views of Townhall.com. 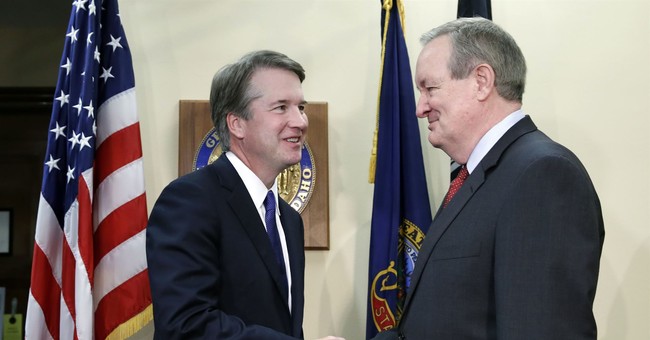 President Trump is a superb showman as well as statesman. On his second Supreme Court nomination, he kept the public waiting and his supporters wondering. Before he announced his decision, the Left and their Democratic hordes in Congress raged about the end of Roe v. Wade (and the poorly written, judicial activist imposed gay marriage decision).

I had wanted U.S. Senator Mike Lee. Unfortunately, the fact that he declared his fervent opposition to Roe v. Wade (which should be overturned, by the way) would have hurt his chances of getting the two pro-choice Republican U.S. Senators (Murkowski of Alaska and Collins of Maine) to support him. Beyond that, judges should not declare distinct, fervent opposition to specific decisions or laws early on. Such policy statements undermine the veneer and core of judicial independence.

Ann Coney Barrett would have checked off a number of interests (young, female, staunchly pro-life and pro-First Amendment). She would be the perfect replacement for Ruth Bader Ginsburg.  Thomas Hardiman would have been the logical choice, since he had already been vetted, ending up runner-up to Neil Gorsuch. Kavanaugh is an excellent choice, although an option I had not considered seriously until the increasing number of reports the day before indicated that he was the likely nominee.

Ann Coulter brought him to the forefront multiple times over the past week. She argued consistently that he was the best candidate for advancing the “America First” agenda.

Indeed, Kavanaugh’s record on “America First” is a proud pedigree worth looking at more closely:

Note that Kavanaugh is not afraid to be a losing dissenter, while his predecessor was more interested in being in “the majority.” This judicial vetting process that led to Judge Brett Kavanaugh is the first time to my knowledge that the president, the political class, and the public at large applied an immigration litmus test. It’s disconcerting in a limited sense that popular interests have become so central in the selection of federal judges. Still, the highest court in the country should not shy away from shoring up the nation’s borders and securing the sovereignty of the nation. The rule of law is at stake, especially in the blue bastions of resistance like California and New York. This country needs a federal judiciary ready to challenge this regional rebellion.

He worked for the Bush Administration. He helped with the Florida recount which flipped the state into the red column in Election 2000. That record should invite support from the GOP Establishment and outrage from the Left. The GOPe wouldn’t reject a nominee who had not only worked with W., but was later nominated by W. for the United States Court of Appeals for the District of Columbia.

As with Gorsuch, Trump listened to the people and considered the best interests of the county, not the comfort of the political power-brokers. Reports indicated that Majority Leader McConnell wanted Raymond Kethledge (or Thomas Hardiman) for an easier confirmation. When the populist uproar over Kethledge reached a boil (his past decisions suggested weakness on immigration), reports quickly tumbled out that Kethledge was out of the running. This process played out last year, when Trump had favored Judge William Pryor. His record on First Amendment issues, especially religious liberty, was shaky, though. National grassroots groups had registered their complaints to good effect.

Unlike previous Republican Presidents, Trump welcomes the political fight for good nominees. Kavanaugh, the rock-steady constitutional originalist, has courted controversy before. Bush 43 nominated him to the D.C. Court of Appeals, but he wasn’t confirmed for three years! In the minority at the time, Senate Democrats pulled every stop to stop him and other Bush-era judicial nominees. Eventually, the “Gang of 14” allowed some appointments to move forward, thus averting the nuclear option to quash the filibuster for federal district and court nominees. Kavanaugh likely got confirmation because of this brokered deal at the time. Trump could have but didn’t choose a “consensus” choice. Kavanaugh has a definitive, controversial, and consistently conservative record.

Trump’s nominations continue to be refreshingly principled, a contrast to the last Republican president, George W. Bush, who didn’t want to confront the U.S. Senate gridlock. John Roberts had a thin judicial record, and some of his decisions have hurt the country. When Justice Sandra Day O’Connor retired Bush first nominated White House counsel Harriet Miers: a liberal nominee with no discernable record or judicial experience. Bush’s choice came from weakness, simply because the White House wanted to avoid a senatorial showdown. Trump doesn’t flee from the fight.

In fact, the Kavanaugh nomination guarantees trolling against and feckless opposition from the Democratic Senate minority. Kavanaugh worked with Kenneth Starr during the prosecution of President Bill Clinton. Expect to hear the Clintons mentioned in the press, with reminders of their perennial corruption. Kavanaugh’s strong record supporting life, the Second Amendment, and religious liberties will also inflame the Left. Of course, Red State Democratic senators will be caught between their caucus leaders and the Deep Red Wave coming in November. This will be fun.

Last of all, this nominee has support from divergent sections of the ideological spectrum. A liberal professor in a liberal news rag rated him a top-notch nominee. Conservatives love him. Libertarians are jittery about the Fourth Amendment, but they have little else to complain about. The Brett Kavanaugh appointment is nothing short of brilliant, if unforeseen (at least for me).