Arthur Schaper
|
Posted: Jul 06, 2018 12:01 AM
Share   Tweet
The opinions expressed by columnists are their own and do not necessarily represent the views of Townhall.com. 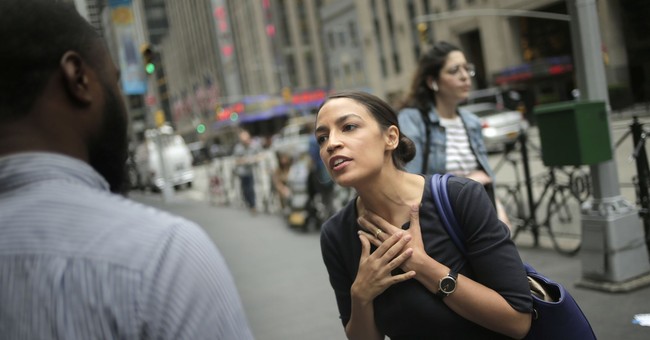 Tom Perez, the Big Labor Establishment-backed Democratic National Committee Chairman, declared that the upstart Berniecrat, Bronx-native Alexandria Ocasio-Cortez was the future of the Democratic Party. She rocketed to the forefront of Democratic politics when she had trounced liberal Democratic House leader Joe Crowley 57%-43% in a Democratic primary upset. She’s young, a minority, and energizing to the Left. She also opposes secure borders, wants Medicare for all, demands the abolition ICE, and she calls housing “a right.” In other words, she’s a socialist.

As expected, the liberal press, including The Nation, wrote a glowing review of this self-avowed Democratic Socialist Millennial of Puerto Rican descent who campaigned hard for Bernie Sanders in 2016. The likely reason why Perez called Ocasio-Cortez the Democratic Party’s future is that he fears losing his job. The left tends to cannibalize itself when the younger generation demands socialist outcomes at a faster rate. Instead of heeding the past and ignoring these demands, the leadership and doubles down on this self-defeating insanity.

None of this sick, self-defeating cycle among left-wing partisans should surprise us. During the French Revolution--the template for every modern, radical, self-destructive political movement—the liberal reformers established a freer, more equitable system, but clashed with the increasingly radical, upset Jacobins.  Where did this dangerous arrogance spring from? A growing secular self-importance, which arose out from the growing split within the Enlightenment movement. Not content to challenge traditions in order to arrive at the truth, these radicals derided and discarded all Western legacies. They wanted tear down everything in order build up something new based on their “enlightened” ideals.

The French radicals, the progenitors of Ocasio et al., wanted to create perfected men within an ideal society. Their utopian agenda meant dispensing with God, rejecting Christian revelation (not just Catholic tradition), and inventing a new society by force. Thus came the Terror, and with it the tool to shape this “brave new world”: the Guillotine. Facing foreign invaders without and civilian uprisings within (human nature resists being told what to do, even if it’s “for the common good”), the Revolutionary leaders enacted the Law of Suspects. They arrested and eliminated anyone opposed to their “free and equal” ends. When even Robespierre’s violent confidants thought he was going too far, Robespierre shoved them under the national blade for treason, too.

A century later came the Russian Revolution. Lenin’s communist agenda brought forth not just a worker’s revolution, but abolition and then execution of the Russia royal classes. The inevitable infighting followed, which gave Joseph Stalin the upper hand, while his rival Leon Trotsky got an icicle in the chest. The quest for naked power and self-interest among communist agitators will crowd out the push for the common good and egalitarian ends. These left-wing revolutions inevitably collapse upon themselves.

The United States is not witnessing the bloodshed which flooded the streets of Revolutionary France and Russia. However, the disturbing uptick in violence—against elected officials as well as peaceful citizens—should alarm us of the aggressive push of the regressive Left. Their animus isn’t just reserved for their political adversaries on the right. They have attacked their own, too. Black Lives Matter protesters have interrupted gay pride parades in Washington DC, Minnesota, and even Toronto, Canada. Today’s Millennial progressive mob have deemed Democratic Socialist Bernie Sanders as part of the problem. He’s too “Right-wing” for their taste because he won’t advocate for the dissolution of ICE, and “Sanders is not a revolutionary.” Neither is presidential contender Kamala Harris. Will that ruin her intersectional appeal to the Democratic base?

Ocasio-Cortez is not the future of the Democratic Party. She’s their obituary. Her radical demands are splitting the party and will turn off independent voters, too.  Ocasio’s enticement of “free stuff” may have been alluring during the Obama Administration, but the Trump Administration’s regulatory rollback and tax reforms have unleashed unprecedented wealth, prosperity, and opportunity. The new, rising generation of makers don’t want to pay for takers.

Americans want to enjoy peace along with their prosperity, public safety as well as private enrichment. Ocasio-Cortez’ call to terminate ICE and remove all borders is backfiring, big time. These Anti-Trump lunatics crowd outside homes where ICE agents serve federal warrants to end human trafficking and drug smuggling, not just deport illegal aliens. To appease their rising left-wing partisans, Democrats have embraced crime, corruption, and chaos: not a winning platform for Election 2018 or 2020.

Besides, the world at large, including the United States, is already witnessing this political and moral plague of socialism at its best (i.e. worst) in Venezuela. Government greed in the name of “the common good” has squeezed out private interests and investment. Anyone with money fled that country, and everyone else left behind scrounges through garbage cans or invades the local zoo to forage for food. Even historically Communist countries don’t want communism anymore. China has long embraced economic reforms, even though they remain an abusive, authoritative state. Uber-Stalinst North Korea wants out of its self-imposed communistic predicament, enough that Little Kim met with Uncle Donald to discuss peace and rapprochement.

Whether it induces or tears or laughter, the Democratic Party has descended down this socialist, suicidal decline before in 1972 and then 1984. Democrat George McGovern was a roaring progressive who didn’t heed the Silent Majority’s outrage over rising crime. Nixon won re-election in a 49-state landslide. In 1984, Democrat Walter Mondale was weak on Soviet aggression and promised to raise everyone’s taxes. Reagan romped Mondale in another 49-state sweep.

When a political movement embraces quality as the determined result, when moral standards no longer stand, that movement won’t last very long. Ocasio-Cortez’ socialism is not the future, but a failed reverberation of the past. The Democratic Party’s decision to embrace this repeated, reckless stupidity is sad but not necessarily shocking. In fact, it could serve as a relief to the Republican party in particular and American voters in general. I am definitely looking to President Donald Trump winning 2020 with another 49-state victory.