The Plight of Our Border Patrol, Beyond Media Posturing and Politicking

Arthur Schaper
|
Posted: Jun 27, 2018 12:01 AM
Share   Tweet
The opinions expressed by columnists are their own and do not necessarily represent the views of Townhall.com. 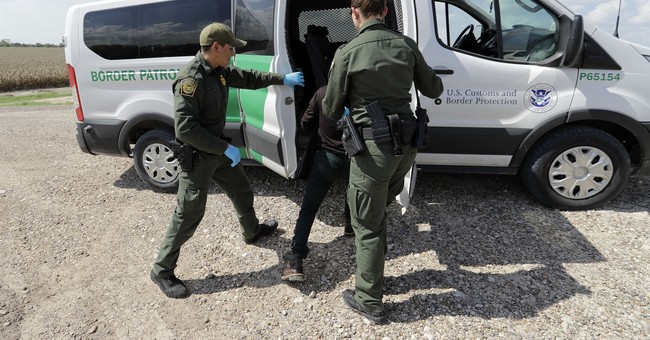 Protecting the homeland is the highest priority for our government, and the protectors of our homeland, the border patrol agents, deserve the highest respect. However, while the media plays up the pain and suffering of illegal alien parents placing their children in harm’s way to break into the United States, the public hears very little about what our border law enforcement must face. This week, I received a video from ABC News. Elizabeth Russo shared the following reportwith David Muir as news anchor. The segment, billed an “ABC Exclusive”, included one of their on-location reporters at McAllen Texas as he followed along with a border patrol agent. Afterwards, he interviewed a Border Commissioner.

As expected, the report played up the plight of the illegal aliens rather than our nation’s law enforcement. The first segment features one agent, officer Robert Rodriguez, who catches a family of migrants, then he pursues their smuggler. Scurrying away in a small boat, the trafficker crosses back over the Rio Grande to escape arrest, and the whole thing is captured on camera. The agent cannot pursue the smuggler, but he reluctantly accepts that the smuggler is gone for now.

In the second part, the camera crew catches up with the migrants, who had kept moving. It’s almost as though the smuggler purposefully played this game of distracting the border patrol agents to run after him, while the illegal alien migrants can continue their journey across the border. The reporter’s description of the migrants is compassion-oriented editorializing: “They are tired, sweaty, confused.”

How does he know that they are confused? What exactly are they confused about? Their goal is to go north. Not that hard, really, considering that it means going opposite the way from where they had come from. The American public is constantly subjected to the media’s push to personalize the illegal aliens’ trials to breaking into our country, as if they are the heroes of this story. The camera then focuses on a little baby named Angel. One woman explains that they are fleeing gang violence. The gangs targeting her baby have already killed the father.

Are these stories true? Perhaps, but we should be skeptical of these dramatic displays of human anguish caught on camera. By wide margins the American public blames the illegal aliens for the crisis of family separation. Voters should contrast these tragedies with the millions of Americans who have lost their jobs, who have seen their quality of life diminish, and who live in violence-torn communities where transnational gangs are waging all kinds of domestic terror. Much of this crime and corruption stems from illegal aliens, including the transnational gang known as MS-13. The solution to this international violence is not an open border.

In the last segment of the Exclusive, Commissioner Kevin McAleenan of Customs and Border Protection talks about what his border agents go through. Everyone needs to know about their frustrations and the challenges they contend with. First, they were ordered to comply with a zero tolerance policy, which justly requires prosecution of every illegal alien border crosser. With that policy has followed the necessary separation of criminal parents from their children. Then the President reversed the order, complicating their efforts. Never did he apologize for enforcement of our nation’s laws. “That’s a challenge in law enforcement. You’re always taking actions that impact people.”

The interview above provokes a broader set of questions: Why does the media put law enforcement on trial for doing their jobs? Where’s the compassion for American citizens who live in war zones in their own country?  Last month, I connected with activists in Monterey County, California including Angie Morfin, whose son Ruben was murdered by an illegal alien gang member three decades ago. These citizens detailed for me the rising crime rates and corruption caused by illegal immigration in Salinas, CA. It’s gotten so bad, students may not wear red or blue clothing, since they are gang-affiliated colors. While Central American migrants seek asylum by any means in the United Sates, where do United States citizens go when their own neighborhoods are blighted with gang violence?

In contrast to ABC News biased reporting on the border crisis, conservative news anchor Tomi Lahren offered a respectful perspective on America's protectors. We don’t see her interactions with border agents, but in her final thoughts for the evening she focuses exclusively on their hard work, patience, and diligence to do the greatest good for everyone, even the illegal aliens! Yes, and viewers can even witness this good will when Agent Rodriguez offered water to the one-year old in the arms of her illegal alien migrant mother.

Despite their efforts to exploit the border crisis to shame the public and our government’s enforcement efforts, the ABC report showcased the brave steps efforts of border patrol agents to enforce the law in the most humanitarian ways possible. In spite of every effort from the liberal media to make law enforcement look cruel and cold-hearted, it’s clear that border patrol agents are working as hard as they can to keep America and Americans safe. Not only that, but these fighting men and women put their lives on the line to protect all of us—and to protect the country—while dealing with the never-ending posturing of the political class in Washington DC and in the border states.

It appears that their work is only going to get harder. One report now contends that border agents will have to settle for catch-and-release again, since the families must stay together as best as possible per President Trump’s latest executive order. While Washington DC plays politics, and the national media stokes outrage and pulls on the emotional heartstrings of the viewing public, the United States sovereignty and safety endure ongoing attacks and destruction, and our brave men and women have to shoulder through to serve and protect their country and citizens as best as they can. Our control deserves better, and so do our protectors along the Southern Border.