Arthur Schaper
|
Posted: Jun 09, 2018 12:01 AM
Share   Tweet
The opinions expressed by columnists are their own and do not necessarily represent the views of Townhall.com. 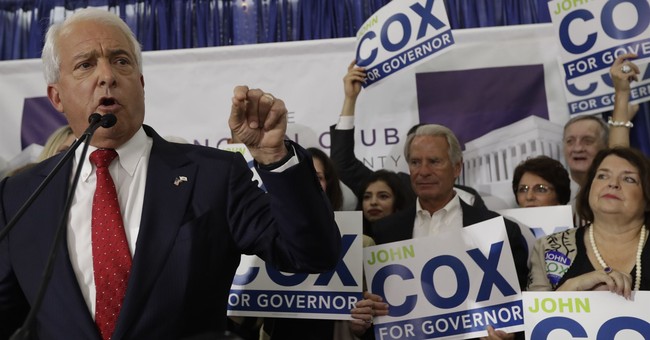 The California Election 2018 primary has come and gone.

It was real, and it was spectacular.

Yes, I wrote that, as a beleaguered California conservative and Trump supporter. Election results worked out quite well in our favor and for the country as a whole. Was there a blue wave? Nope. More like a trickle, and the results portend a red resurgence of sorts. Perhaps a red wave will finally wash over the country and finish in the Pacific Ocean. For the past 8 years, from the Tea Party wave of 2010 to the present day, I watched with sad dismay as blue states like Pennsylvania and Michigan have gotten redder, while California has gone from cobalt blue to outright asphyxiation.

This time around, the tide turned and for the better.

First, let’s dispense with the bad news, and there was some. For US Senate, once again Republicans were shut out because of California’s Top Two jungle primary. Incumbent Dianne Feinstein embraced a more of the left’s take on issues (she now suddenly opposes the death penalty), but all in all she remains a pro-Israel stalwart who will do very little damage in the US Senate, since she does so little to begin with. She will be facing the ultra-leftist Kevin De Leon, the self-serving thug who pushed the Sanctuary State law down everyone’s throats. I admit my vote for Feinstein now so that the sting wears off sooner. I have never voted for a Democrat before, but because De Leon is so odious, hellbent on being the Hispanic version of Barack Obama in six years, I will be voting for DiFi. Most people don’t know this, but Feinstein opposes single-payer and she opposed the Sanctuary State law when it was wending its way through the state legislature. Those two reasons alone make her a tolerable choice compared to her racist, regressive wannabe successor.

OK, that was the bad news. Now let’s talk about the good, and there’s so much.

The first major victory—and this is huge—was the successful recall of State Senator Josh Newman (D-Fullerston). A relativey unknown who coasted on his dubious veteran status and suddenly shot out of nowhere, Newman defeated incumbent assemblywoman Ling Ling Chang on Election Night 2016. Allegations of voter fraud emerged shortly afterwards, since Chang’s slim 3,000 vote majority in November turned into a 1,000 vote deficit three weeks later. This kind of sudden shift in Democratic votes has become a common feature on California’s Election Days. The day turns into weeks and then a month, and suddenly enough provisional ballots turn a close race tilting in a Republican’s favor into a Democratic victory.

That didn’t happen this time, as voters in the tri-county region voted two-to-one to get rid of the deciding vote for the horrendous, massively unpopular gas and car tax hikes. Newman also voted for sanctuary state, but recall proponents made sure that voters were well aware of Newman’s betrayal. This victory was particularly gratifying since I helped collect signatures to get Newman recalled and protested one of his campaign events. It feels good to win!

There were victories at the state level, too. Political pundits and the consultant class said it couldn’t be done, but solid Republican candidates made it into the Top Two general election. “I bet you that not one Republican nominee will be running for statewide office after the June primary,”  one cynical consultant told me. He was so certain...and so wrong.

The most important candidate is John Cox, who bested my choice for governor. Cox gained incredible momentum within two weeks with President Trump’s help, vaulting into the top two to face off against “Gruesome” Gavin Newsom, the former mayor of San Francisco, then do-nothing Lieutenant Governor. Cox’s victory shut out the left-wing, open borders former mayor of Los Angeles Antonio Villaraigosa. His career is over and California voters will have a choice in the governor’s race.

When Trump endorsed Cox, I was puzzled, even worried. I didn’t accept the argument that Trump was uninformed or misled, since he’s lately been following his populist instincts on trade, immigration, and Congressional negotiations. Looking past the primary, with a strong bench of statewide candidates and a welcome Republican turnout for Congressional and state races, it’s evident why Trump made the call that he did. For the MAGA agenda to continue, Trump needs GOP majorities in both houses of Congress. Democrats had targeted seven Congressional seats, too, and with no Republican candidate for Governor, Democrats would have had the edge—and edged out conservatives.

While some conservatives activists may feel they lost the fight, Trump wants to win the war, and on Election Night 2018, California Republicans won big. We have a solid candidate for Attorney General, a conservative judge whose numbers showed him winning against anti-Trump incumbent Xavier Becerra, too. The voter turnout showed that Republican incumbents and challengers for Congress will win, too.

Returning to the voter turnout. The Blue Wave that would be, wasn’t. So far, no close contests that might hurt Republicans have emerged on the electoral horizon. Still, the final tally will take weeks, and in Los Angeles County one hundred thousand voters did not find their names registered at their polling stations.

California is still very much America, and the latest primary election results show that we are not a lost cause, but a resurging state. The blue wave has been further reduced to a toilet flush trickle, and Trump supporters in one of the bluest states in the union can rest assured for more political victories ahead.