The California Democratic Party: The Ghost of Confederates Past

Arthur Schaper
|
Posted: Dec 19, 2016 12:01 AM
Share   Tweet
The opinions expressed by columnists are their own and do not necessarily represent the views of Townhall.com. 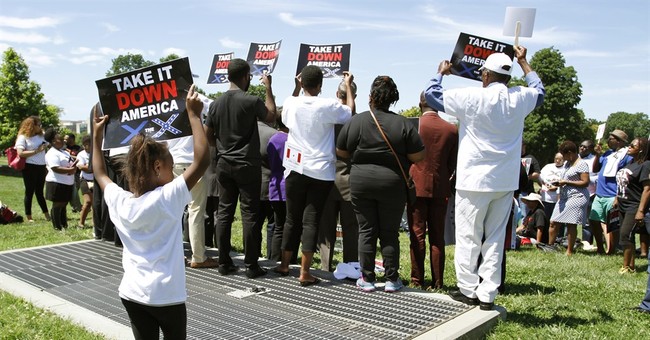 Republican Donald Trump is our new President. Barring any shenanigans from the Electoral College, 306 electors will have cast their ballots for a pro-American, pro-business, anti-globalist conservative dedicated to protecting our freedoms.

Not everyone in the Union is happy. Democratic strongholds have vowed to resist the Trump Administration at every turn. California and its supermajority Democratic hegemony are particularly dedicated to the proposition that the liberal elites know better and should not have to answer to the vox populi of Middle America, who believe that all men are created equal and that the government should be limited.

Governor Jerry Brown has sworn to build a wall around California. Janice Hahn of the Los Angeles County Board of Supervisors has advocated the same, all in the name of protecting the illegal aliens within the state. The Democratic legislature’s two leaders have vowed to fight the federal government at every step. The faint hint of secession hangs in the air, too. California liberals have lined up initiatives so that voters can decide if they want to leave the United States or not. A #Calexit lingers on the horizon, and there’s enough Silicon Valley money to advance the proposal to a vote.

What a bunch of pansies. After the election of the first Republican President in 1860. the South Carolina (Democratic) legislature  disdained a national plebiscite—they simply drafted a resolution and announced to the federal government: “We’re leaving!” Ten states followed. Then followed the Civil War. After five years of bloodshed, Democratic policies failed, not just at the ballot box but in fields of battle all over the country.

Indeed, the California Democratic Party of today is resurrecting the same arrogant, defiant, yet dying spirit of the Ante-Bellum Southern Democratic secessionists. They are the weaker, fainter vestiges of a dying Confederacy, a state unto itself convinced of their own intelligence, disdainful of federal authority and constitutional principles. Even though California’s Democrats recently banned displays of the Confederate flag on state property, thy spirit of modern slavery, aka socialism, is strong with them.

And the parallels are more striking than that!

How did the Democratic Party of 1860 intend to solidify its power? They engaged in voter fraud on a massive scale. Throughout the Southern states, not one ballot listed Abraham Lincoln as a potential presidential candidate. Today, in dominant Democratic regions like the inner cities, voting machines automatically turn Republican votes into Democratic ones. Dead people vote, too!  And like the political machines which followed the Civil War, Democrats depend on buying votes with other people’s money, whether for graft or gain, through subsidies or welfare. Today, California is the welfare capital of the United States, welcoming one third of the country’s public assistance dependents.

Malapportionment—in which House Districts represent fewer  people than designated –guaranteed a set number of unaccountable federal representatives to enrich the Ante-Bellum Democracy. Since slaves counted as 3/5 of a person for representation, Southern states maintained a stable number of representatives, even though the same individuals who counted could not vote. Today, Democrats count on the surging population of illegal aliens to buttress their numbers and increase their unjust hegemony in the federal government. A recent case before the Supreme Court could have determine whether allocation of House reps and electoral votes should depend on the actual population in district, or the number of lawfully designated voters. If apportionment of House Seats depended on actually voters (living and legal), Democratic numbers would drift below 100 seats.

Let’s not forget that the Democracy of the 1860s was an elitist fringe dedicated to protecting the limited interests of Big Business at the expense of the common man. Before the Civil War, they lined up their votes to protect plantation owners—who screamed the loudest and beat up opponents.

Democrats then and now have not changed on other key issues. The rule of law means nothing to them. The rule of sentiment and of the “landed gentry” makes all the difference. He who has the gold makes the rules, not the other way around. Constitutional niceties are meant to be ignored. They had their social justice warriors, too, who attacked anyone who disagreed with them (recall South Carolina representative Preston Brooks who savagely thrashed free-soiler US Senator Charles Sumner of Massachusetts with a cane.)

Democrats then and now relied on racism and division to consolidate power, and they depended on an uneducated class of adherents to further their agendas. After all, Southerners ensured that black slaves could neither read nor write. Today, in Democratically-dominated inner cities all over the country, residents not only cannot find jobs or opportunity, they are systematically denied a proper education to take advantage of any opportunities—if any of them were made available.

Now for the good news: The Democracy is at its lowest ebb since the Republicans freed the slaves, and more voters are fleeing the modern day Democratic plantation. The California Democracy cannot stand against liberty, nor stand in the doorway preventing the next generation from learning the truth about this country’s grand history and future.

The temper tantrums of the café latte-sipping California elites will be but a whimper compared to the guns fired on the fields of Gettysburg a century and a half ago. And indeed this country will witness a new birth of freedom, and that “government of the people, by the people, for the people, shall not perish from the earth.”