Arthur Schaper
|
Posted: Feb 11, 2016 12:01 AM
Share   Tweet
The opinions expressed by columnists are their own and do not necessarily represent the views of Townhall.com. 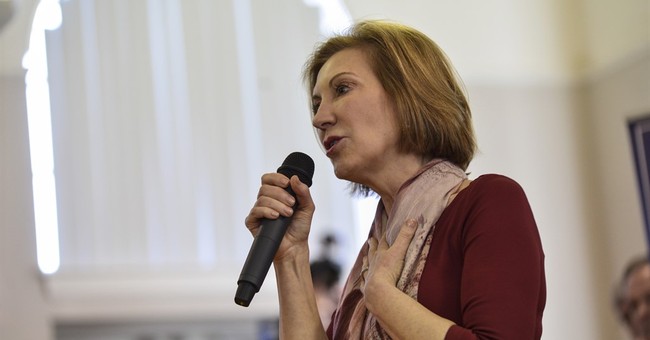 Carly Fiorina, the fiery start-up Presidential candidate who went from secretary to CEO; the lady who proved that a she can do just as well---if not better—than a he in the White House; the defined and definite woman who would comfort our good friend Bibi in Israel, and tell the Iranian Ayatollahs that the Deal is off; the lady with quite a face, and a backbone that would make Chris Christie look squishy (granted, that’s not the best comparison); the woman who proved her own in under-card debates, unafraid to compare herself to Dame Margaret “Iron Lady” Thatcher; who kafe-klatched with the View, and kicked them in the teeth; who pushed her way onto an eleven-candidate stage and stood her ground; this Carly has dropped out of the Presidential race.

She had two dismal seventh place performances in Iowa and New Hampshire. Of course, the second loss falls in part on the media who refused her a place at the debate with Marco, Ted Cruz, and Jeb.

I wanted to vote for her. She was on my short-list of candidates, just behind Cruz.

In fact, I had voted for her before. When Carly ran for US Senate in California in 2010, I was hoping, as did many national and local pundits, that she would unseat Batty Barbara Boxer, the same creepy liberal who believed that a baby was not a baby until he exited the uterus, entered the mother’s arms, and came home. To this day, those haunting views about life have dogged her, but did not prevent her from reelection. At least she is finally retiring, and Republican chances are looking better every day that we can take back that seat.

As a US Senate Presidential Candidate, she ran on instead of running away from conservative views. Pro-life and pro-marriage, she coalesced the right balance of Tea Party principle with moderate pragmatism.

Yet she lost that race. She was ill-prepared for the camera in those days. She made off-hand remarks, which the cameras caught and repeated to her hurt. She talked about jobs, but not much else, while Boxer wanted to fight about every divisive issue imaginable.

In those days, I thought she sucked. Yes, I admit that I have written as much. Today, Fiorina proved herself, and proved how much one person—one woman—can overcome. She did her best in California, but she improved on past mistakes.

Today, I retract my criticisms of Carly. Today, Candidate Carly would have been a great Chief Executive. I only wish that the Carly of Election 2016 had shown her stuff in 2010.

This woman is more than capable. Her grasp of foreign policy entailed so much more than seeing a foreign country from her house. She understood that the media and the political class cards were lined up against her. Those odds pushed her to fight even harder, and she beat them handily.

She is an incredible debater, too, unwilling to cede the main stage to the boys just because of low numbers. She worked the media just like Trump, but with more panache and flair, plus that special woman’s touch. Trump is a vulgarian, as everyone knows. Carly is all class, and should have debated in the last forum before New Hampshire.

I have read a number of times that she is seeking the Vice Presidency. My answer? You Betcha. Palin pales, especially since she claims that Donald Trump is The One, and Cruz is an Establishment Hack. And this point brings out another one of Carly’s sterling traits: she never attacked people, but would hammer bad ideas, held competitors accountable for holding those ideas. That’s what leadership is all about.

For a long time, I had believed that the downfall and selling off of Hewlett-Packard was all Carly’s fault. This “female Romney” scuttled any decent chance of the US Senate seat because she hadn’t handled her corporate past effectively. When she trotted out an apology from her former employers this past year, I realized that I was wrong.

This go-around, she was prepared for the heavy-handed attacks this time around. I wish that she had been ready in the past. Perhaps as a successful US Senator, she could have sought the Presidency, with a commensurate federal record as well as a more consistent national media presence.

What else about this incredible leader and dynamic speaker causes me to regret her sudden exit?

The principles, the vision, the broad, all-encompassing, pro-America and pro-liberty agenda she promoted. She spoke boldly about our godly, God-given Western heritage. She proudly defended life at all stages, just as she had in California six years ago.

She raged against the crony corporate culture dominating Washington and devouring the rest of the country. To her credit, she provided solutions through free markets instead of more government

Consider her final remarks following the official suspension of her hard-fought campaign:

This campaign was always about citizenship — taking back our country from a political class that only serves the big, the powerful, the wealthy, and the well connected. Election after election, the same empty promises are made and the same poll-tested stump speeches are given, but nothing changes. I’ve said throughout this campaign that I will not sit down and be quiet. I’m not going to start now. While I suspend my candidacy today, I will continue to travel this country and fight for those Americans who refuse to settle for the way things are and a status quo that no longer works for them.

Imagine that. Citizenship, the innate revelation that one of us commands great respect and authority, regardless of our pedigree or financial status. We are more than voters, but builders in this great American experiment, and Fiorina wanted to affirm and enlarge this fundamental truth back into the public’s consciousness, for boys and girls.

Thank you, Citizen Carly. Your fight is my fight, and I look forward to seeing you taking on the Big Boys and the Mean Girls here and abroad.