Hollywood's Hijack of the #MeToo Movement

Armstrong Williams
|
Posted: Feb 14, 2019 12:01 AM
Share   Tweet
The opinions expressed by columnists are their own and do not necessarily represent the views of Townhall.com. 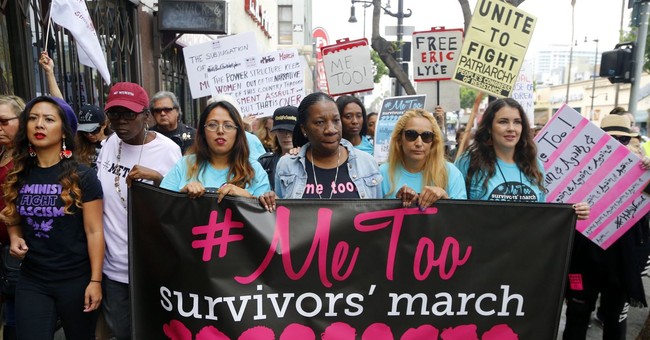 The powerful #MeToo movement was established to address real injustices suffered by women -- and in some cases, although significantly less common, by men. This movement has undeniably affected societal norms and readjusted the fabric of American life.

But such an important movement can be felled by its own excesses. In the wake of the #MeToo movement, people are immediately rushing to judgment and to punishment of any accused individual -- in many cases, without due process. Naturally, this moblike mentality to blindly punish an accused individual has the potential for far-reaching negative consequences -- namely, collateral damage to the falsely accused by those who misuse the movement for their own ambitious aims.

Take, for example, the domestic abuse allegations against Johnny Depp, which should serve as a cautionary tale. Depp is a beloved actor who has won a 14 People's Choice awards. He is, by all accounts, a serial monogamist. His first wife and three decades' worth of long-term girlfriends uniformly characterize him as a sensitive and caring partner.

And then he met and married Amber Heard, who has made the following allegations:

According to Heard and two of her friends, on May 21, 2016, Depp wound up his arm and threw Heard's iPhone at her face from point-blank range "with great force." Apparently, Depp then continued to batter Heard's face. Heard said Depp then "destroyed" the penthouse by wielding a magnum-size wine bottle, leaving the remnants of smashed "fruit," "glass," "baskets," "bottles" and "flowers" littering the floors. As to the injury, Heard's friend said: "Just the whole side of her face was like swolled up (sic) and red and puffy ... and progressively getting worse."

Yet, other eyewitnesses tell a different story. Two domestic abuse-trained police who arrived on the scene soon after the alleged incident -- and who later gave sworn witness depositions -- as well as surveillance camera videotapes of Heard's face and a growing group of witnesses who interacted closely with a makeup-free Heard over the five ensuing days all agree that the injury she presented to the world wasn't legitimate. Six perfect-face days after Heard claimed Depp beat her and "destroyed" his own penthouse apartment -- which police found in perfect condition -- she magically presented her battered face to trailing paparazzi and a judge who granted her an automatic temporary restraining order against Depp.

Depp seemingly has one bit of culpability in all this. At the time of the abuse claims, which immediately preceded the #MeToo movement's genesis, he stayed quiet. Whether because of shyness or misreading the times, he failed to defend himself.

How has Hollywood punished Heard? They made her the leading lady of the billion-dollar Warner Bros. "Aquaman" franchise, the global ambassador of L'Oreal, an ambassador for women's rights at the American Civil Liberties Union and a human rights activist at the U.N. Hollywood's media outlets plaster Heard on their magazine covers, trumpet her as a "survivor" and term Johnny Depp a "monster." Meanwhile, she has penned a vague op-ed about her ordeal for the Washington Post and hurled domestic abuse PSAs at the public.

Hollywood has crowned Heard the face of the #MeToo movement, ignoring the remarkable details of Heard's prior arrest for domestic violence against her female partner. The #MeToo movement itself is tragically harmed by these leaders, and Hollywood looks on approvingly.

Quite simply, Hollywood has attempted to finish the job on Depp. Warner Bros. sought to throw Depp out of "Fantastic Beasts: The Crimes of Grindelwald," in which he played the title character. Only J.K. Rowling's quick defense of Depp saved him, and perhaps only temporarily. Disney recently threw him out of "Pirates of the Caribbean."

Hollywood is where the #MeToo movement started for a reason. It's a place where the powerful can make or break "the talent." "You'll never work in this town again" is the threat. Abuse has often been the result.

When Hollywood serves as judge, jury and executioner of something as serious as abuse allegations, our society and our justice system are ultimately the victims. Real perpetrators can smugly hide their actual abuses behind the smokescreen of a public flogging and the sacrifice of a famous innocent.

#MeToo stands for society's rejection of the sexual abuse, in its many forms, of men, women and children. #BelieveWomen, a favored hashtag of Heard and others, ignores the fact that justice, not gender, is the arbiter of guilt. #MeToo is an important new movement for justice, far too important to be hijacked by the same Hollywood whose crimes and misdemeanors helped create it in the first place.