Armstrong Williams
|
Posted: May 30, 2017 3:05 PM
Share   Tweet
The opinions expressed by columnists are their own and do not necessarily represent the views of Townhall.com. 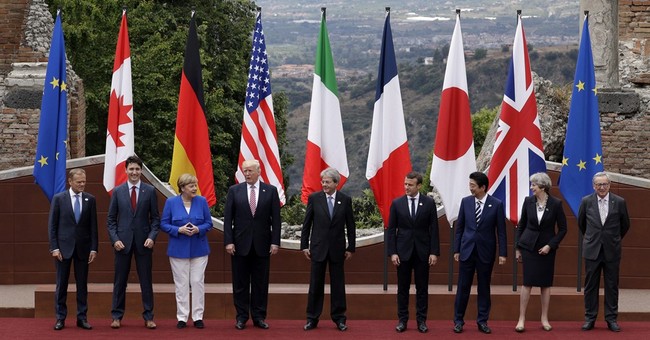 Trending
The message from many Europeans with regard to terrorism is this: enough. That sentiment was echoed time and again in interviews conducted during a broadcasting / reporting trip to Europe which is still underway as I write these words.

Europe’s misguided approach to preventing radical Islamic terrorism on its own soil may be the definition of insanity – repeating the same behavior over and again while expecting different results.

The thought of young innocent children who attended the Ariana Grande concert in Manchester being brutally murdered in a radical Islamic terrorist attack is unconscionable, and compelled my broadcasting team to travel to Manchester in the aftermath of this deplorable carnage to explore the situation in Europe firsthand.

We visited Manchester, where the radical Islamic extremist suicide bomber Salman Abedi blew himself up killing 22 innocent people and injuring 116 others, to speak with residents of Manchester whose lives have been forever changed by this jarring act of cowardly terrorism.

What I learned from the people I spoke with in Manchester was chilling. While many of the local people with whom I spoke were shocked by the cruel level of inhumanity inherent in the concert attack, they were actually not overly surprised that a terrorist attack took place in their backyard.
Many of the people I met in Manchester and London are furious, and they do not feel protected.  Time and again, they complained that the British government is not doing enough to address the United Kingdom’s radicalized population.
CARTOONS | Gary Varvel
View Cartoon

Western values, traditions, and beliefs are under assault in Europe, according to them. And a terrorist attack targeting young music fans, which is in and of itself emblematic of Western pop culture, is just the latest in a growing pattern of radical Islamic terrorism endemic to Europe.  It cannot be treated as an isolated incident. A wave of radical Islamic terrorism is trending in Europe’s major population centers, and is worsening.

A quick snapshot of the most recent terrorist attacks are alarming: In Paris on April 20th, a policeman was murdered on the Champs Elysees in a terrorist attack that ISIS claimed responsibility for days before the French presidential election.
In Stockholm on April 7th, four people were killed and more than a dozen were injured when a truck drove down a busy shopping street. The driver admitted to investigators that he was a member of ISIS.
In Westminster on March 22nd, a terrorist crashed his car into pedestrians on Westminster Bridge, killing four people and injuring many others.  The terrorist then stabbed a police officer to death in New Palace Yard.
The list continues on and on.  Other attacks in the previous months turned the streets of Paris, Berlin, Brussels and Nice into macabre scenes of carnage.

At what point will European leadership witness enough brutal and deadly wake-up calls in the form of radical Islamic terrorism to fundamentally modify their counter-terrorism strategy? That is the question on the minds of men and women in Manchester, London, and Paris.

For far too long, dangerous people have secured passports and settled into new lives in the United Kingdom where they have been welcomed with open arms into England’s democracy.  However, instead of assimilating and adopting Western values, many of these immigrants have settled into mosques where they have been indoctrinated and radicalized, taught to hate the very society that is providing them with the freedom of religion.

So today, many people in Manchester and Europe feel like they have been victimized not once, but twice. One man told me that he was betrayed by the government granting access to would-be terrorists without enough scrutiny, and simultaneously persecuted by radical Islamic terrorists seeking to murder and destroy his way of life.

Where is the red line for the United Kingdom and its European allies when it comes to enforcing more stringent immigration safeguards as part of an effective counter-terrorism tactic? What is also rarely discussed is that many of the terrorist are born in areas where the destruction occurs , i.e. France, Belgium, and the U.K. How many more terrorist attacks will it take for long overdue immigration reform to be enacted?

I am deeply unsettled by the feeling that some of the concerns expressed by the people of Manchester may be easily transferable to America. While we must always remain a democracy, we also have a moral obligation to safeguard the freedom and lives of all Americans from radical Islamic terrorism.  We must be vigilant about who we let into our country, and proactively prevent our own society from following the European path to terrorist entrapment.