No Compromises on a Sinking Ship 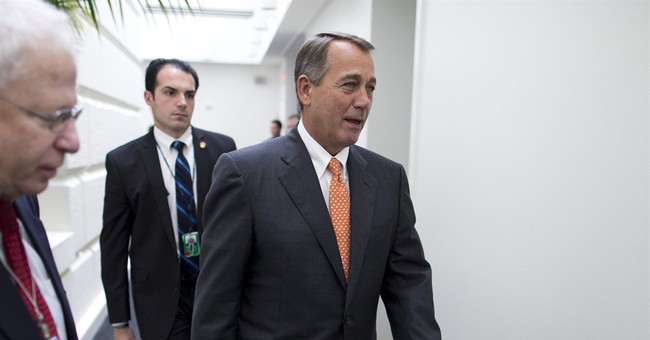 Usually when two sides cannot come to an agreement, they can let an arbiter weigh their arguments and settle the dispute. Some arbiters try to find the optimum compromise, while others simple rule in favor of one side over the other.

Unfortunately for America, we have no arbitrator. Instead we have two groups of buffoons flinging muck at each other.

On one side we have a group of Republicans in the House refusing to do anything unless Obamacare’s individual mandate in delayed or, better yet, defunded.

On the other side you have the Democrat Senate refusing to vote on any bills.

Traditionally, the President tries to act as the arbiter in such disputes, but Obama refuses to entertain negotiations. He insists that the House GOP drop all their demands and give him free reign.

Does neither side understand what a compromise is? In a negotiation, unless you are dealing with a fool, you never get everything you want. You must make concessions in order to move forward.

I am a businessman and can tell you that time and again I have to compromise to make a deal. By finding areas of agreement and contention, we can iron out those issues and find some kind of middle-ground. I may not get everything I want, but I get enough to make the deal worthwhile for both my associates and me.

The biggest difference between my business deals and the current shutdown squabble is that I can walk away if I think the deal is skewed too against me.

The GOP’s idea of a compromise is to offer a delay rather than liquidate the Affordable Healthcare Act (ACA). This notion was the strategy behind passing both bills and sending them to the Senate, figuring that the Senate would obviously reject defunding and negotiate on the delay.

But Republican leadership is stupid. They could not foresee that Reid would bundle the bills and force an up/down vote for both or either all at once. They thought the debt ceiling deadline was leverage when, in actuality, it is a corner into which they are blindingly running.

They were also dumb enough to think they could beat the President and Democrats in a PR war over the shutdown. In Washington and the media, political compromise means the Republicans should capitulate to the Democrats. Democrats standing on principle are “courageous," while Republicans doing the same are “jihadists, arsonists, and terrorists.” It has been this way for at least 30 years and remains so. To expect anything different is insanity.

In the Senate, Harry Reid’s idea of a compromise is to demand that the GOP pass a clean continuing resolution (CR) that keeps everything the same as it is. He knew perfectly well that stonewalling the House would lead to a shutdown and was (rightly) confident that the Democrats could win the media battle.

Over in the White House, The President sat back and proceeded to simply be an adolescent. He refuses to even meet with Republican leaders to hammer out a compromise. He sends out marching orders to the 83% of the government not actually shutdown to make the shutdown as obvious and painful as possible, just as he had done earlier this year for sequestration but even more outrageously.

Never before in any of the previous 17 shutdowns has the National Mall been closed, or seniors forcibly expelled from their homes, or scenic overlooks been barricaded. This is a man that thinks keeping his wife’s nutrition based website up and running is essential, but the Amber Alert system is not.

Obama had to make the cuts more pronounced because few Americans actually noticed sequestration. If America can actually run with fewer federal dollars being shelled out, then perhaps the Republicans are right about smaller government.

Regrettably, Obama can afford to be this way. The press will not call him on his behavior and his supporters are too doe eyed to admit he is managing to be more of a child in this than even GOP (and that takes a titanic effort).

Boehner is an incompetent fool, Reid is a weasel, and the President of the United States is a reprobate. I am reminded of the old saying, “we get the government we deserve.” I ask myself what did We the People ever do to deserve this ride on the Ship of Fools?

Both sides are so convinced they are going to “win” that they have forgotten that to make this republic work takes making trade-offs. I honestly do not believe that either party knows how to win a war of ideas. They try to win battles, even taking a Pyrrhic victory over losing a media cycle or election. They stand for no real ideal and cannot plan beyond tomorrow.

Should we be surprised? Can we not see this same failure in how our government conducts all its affairs, including foreign policy and wars? We have developed a culture of winning battles while losing wars. We change the definition of success, or simply refuse to define what victory is. We throw money and lives at every perceived problem and count it as a triumph before the fighting finishes. Or we simply vacate the field and boast victory to a tiny band of true believers.

I do not believe America is yet irredeemable, but it needs leaders that understand the importance of long-term health of this country over shortsighted “wins.” It needs leaders willing to negotiate and compromise.

President Truman once said, “It is amazing what you can accomplish if you do not care who gets the credit.” It is too bad we do not have a single political leader that believes in this maxim.