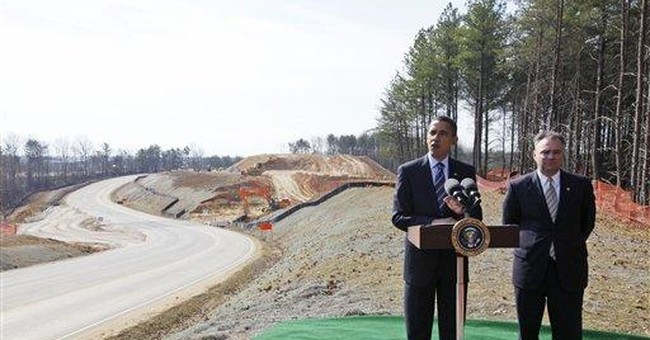 Over the past 14 months, I have consistently criticized the liberal and arguably socialist economic policies of President Obama and the Democratic Congress. As pointed out in prior commentaries, these policies will sap the world’s most productive economic system. There are many examples where liberalism and Western European socialism sapped the strength of otherwise strong capitalist economies.

Government policy does not have to sap America’s economy. There are relatively simple policies that, if implemented, can strengthen America’s economy over time. While these policies are simple in conception, they are difficult in practice if there is no political will. These policies require economic sacrifice and political discipline on the part of the American people. They also require Americans to look in the mirror and take responsibility for their own lives. There can be no free rides at others’ expense. These are some of my suggestions to make America’s economy strong again.

No government deficits! Go back to first financial principals. Like prudent individuals, the federal government should not spend more than it receives in revenue. While this principal should be self-evident, it has been almost consistently ignored by western governments since the Great Depression. At that time the great British economist John Maynard Keynes convinced world politicians that deficit spending stimulates the economy. With this economic rational, the deficit genie was out of the bottle. Spendthrift politicians found a justification for spending government money that they did not have. Now that the deficit genie has been out of the bottle for 75 years, it may require a constitutional amendment to force Congress to do the right thing and balance the budget.

Simplify income taxes. A simple flat income tax with no personal deductions will enable Americans to save billions in tax accountants, lawyers and software. Furthermore, Americans will spend their money based on their preferences – not the government’s preferences influenced by tax policy.

Subject all Americans to the income tax. Today, 50% of all income tax filers do not pay income taxes. The top 25% of taxpayers pay 86% of all taxes and the top 1% pay 40% of all taxes. When 50% of voters go into the voting booth, it is easy for them to vote for a politician who promises to spend other people’s money on programs that cost them no money. However, they might think differently if they had to share the cost. Americans need to be cost conscious at the polls in order to keep politicians from using public funds to buy the votes of non-taxpaying voters.

Restructure Medicare and Medicaid on an actuarially sound basis. This includes making users responsible for keeping costs under control through co payments and higher deductible.

Reduce the national debt. The current national debt is approaching $14.5 trillion by the end of 2010. That amounts to $45,000 for each and every American. The national debt excludes the unfunded future liabilities of social security, Medicare, Medicaid and government pensions. It also excludes the implicit guarantees of Fannie Mae, Freddie Mac, the FDIC, the Pension Guarantee Corp., et al. Under American law, children are not responsible for the debts of their parents.

Recognize that capitalism is the source of America’s prosperity. With respect to American business, the government should follow the medical profession’s first principal – Do No Harm. This does not mean that the government should enact no laws regulating business. It means that laws and regulation should promote capitalism and entrepreneurial activity – not hinder it.

Accept that Health Care costs will not decline. Look at the driving forces inexorably leading to increased health costs. First, the demographics of the aging baby boom generation will result in more senior citizens requiring expensive health care. Second, health care technology is expensive. Moore’s Law does not seem to apply to medical technology. Third, Americans are not generally willing to engage in cost benefit analysis when it comes to treating sick loved ones. Fourth, medical care is a luxury good, and affluent countries and people tend to spend more that poorer ones. These driving forces do not mean that measures should not be taken to reduce waste and inefficiency, but even in an optimally efficient health care system, the driving forces will tend to increase costs.

Although this isn’t an exhaustive list of remedies for our ailing economy, it provides a solid outline of sound economic and accounting principles to make sure that the world’s strongest economy can regain solvency. After all, we owe it to the future of America.