A Temptation too Great? Republicans and the Stimulus 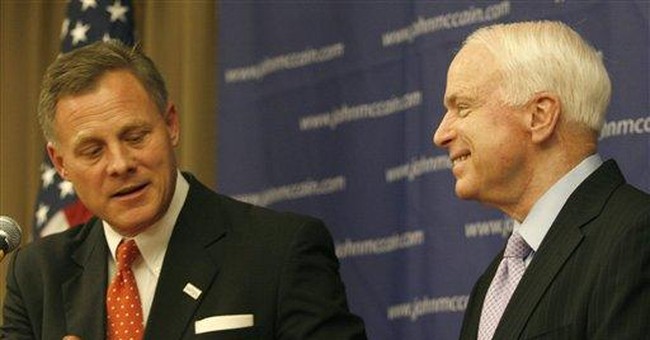 Congressional Republicans rightly opposed the stimulus leviathan last year on the grounds that it wouldn't spur job growth -- or at least, not as much as cutting taxes and liberating the economy's true job creators - small businesses. In rare but classic political form, Republicans managed to draw a line in the sand, clearly pitting their arguments for an American economic renaissance versus a Democratic plan that was headed for certain doom. Fair enough.

Yet over the past year, it seems as though Republicans are on the verge of falling off the spending wagon and reverting to the bad habits of their Democratic counterparts. Most recently, Republicans in Congress have quietly viewed the stimulus as a sort of slush fund behind which they can hide their own political cowardice. For example, it's not easy to tell seniors and veterans who want more money in the form of a cost-of-living adjustment (COLA) that, well, there was no inflation last year, so you're not going to get that increase. Never mind that our nation's entitlement programs are beyond broke. In fact, their dire situation makes Greece look as though it's awash in cash. But how does an elected official say no to seniors and vets - the strongest of voting blocs? Following last week's actions, apparently they don't have to.

After railing for months on White House spending profligacy, Senate Republicans lined up for their share. They voted in hushed circles for an amendment - offered by Sen. Richard Burr (NC), a Republican - that would have given seniors and vets an additional COLA increase of $250 this year. So long as the money came from previously unobligated stimulus funds, the senators felt that money could be used for something they felt was good and right.

A marvelous political calculation, right? They knock out a few birds with this stone. Congressional Republicans get to remind people that the stimulus isn't working and could be used for better things. They further get to tell seniors and vets they voted to give them checks, but the Democrats preferred to use that money to grow the government and oppose Republicans. And, at the end of the day, since they lost, at least money won't be spent on COLAs that, in their heart of hearts, Republicans didn't really think these folks deserved anyway. Is this the current GOP playbook on how to win back the Congress - find a way to look like you're serious about the nation's financial straits, yet still toss around the dollars like you're printing them in the Senate cloakroom??

This sounds to me like the same shenanigans Republicans pulled when they ran the show in Washington earlier this decade. I worry it signals they haven't learned their lesson: that good governing requires making hard choices and telling people "No" some of the time. And I also worry that Republicans actually buy into the idea that government spending, as long as it's done right, is good for the economy. Perhaps, like Democrats, they actually believe this stuff. Republicans defended their vote last week by saying the money was going to be spent on less worthwhile stimulus projects anyway, so they may as well have tried to redirect it. But the problem is, what are these folks going to do a year or two from now when there's no stimulus slush fund for them to raid, and these same folks want another COLA check they don't deserve? Are Republicans going to find the courage then to vote no? I doubt it, because now they're on the record as having supported giving these increases to seniors and vets when there was, in fact, no inflation to justify it. They're setting themselves up for tough decisions - not to mention accusations of hypocrisy - down the road.

Set aside the small matter of $250 increases and a vote-rich demographic, and look at the larger dilemma for Republicans if they keep believing they can get away with these machinations. The recent elections in Virginia, New Jersey and Massachusetts reflected, for the most part, a palpable disdain for the status quo. This page has been filled with commentaries not on how well Republicans have countered the Democratic machine, but rather how poorly this president and his minions have controlled the levers of power. To put it bluntly, Mr. Obama lurched left and tried to buy his way into the hearts and minds of Americans with their own tax dollars. There will always be a good reason to spend more money in Washington. If that is the litmus test for fiscal decisions, government will continue to creep further and further into our lives, confiscating our freedoms. If the Republicans believe they can practice the same methods, only through less onerous means and with more altruistic intentions, then what have we, the voters, really traded up for?

To their credit, Republicans said they wanted no part in the massive government takeover of corporations, car companies and banks, but is that enough any more? Is leadership found in the ability to say, "I would've done things differently?" I'm sorry, that sentiment has lost its savor. Last week's maneuverings by the Republicans look to me as though they have not learned anything through these previous years wandering in the wilderness. As a conservative, I'm looking for behavior today, when many aren't paying attention, of what the GOP will do when voters are paying attention. Now is the time to set the compass toward fiscal austerity; so that when voters thrust Republicans back into office, there can be no equivocation, no doubt, that they were elected to do one thing well, no matter the pain - get the United States out of looming bankruptcy and return government to a position of last resort, not a place of first refusal. The wise former Majority Leader of the House, Rep. Dick Armey (R-TX), often said of such decisions - "The pain is inevitable, the suffering is optional." No more suffering! Republicans must face this hardship and not apologize or be distracted by temporary baubles of political persuasion. The path forward is clear, if not winding and treacherous. Both sides have had it too easy for too long. Meanwhile, Americans suffer.