To Bury McCain, and Yet to Praise Him 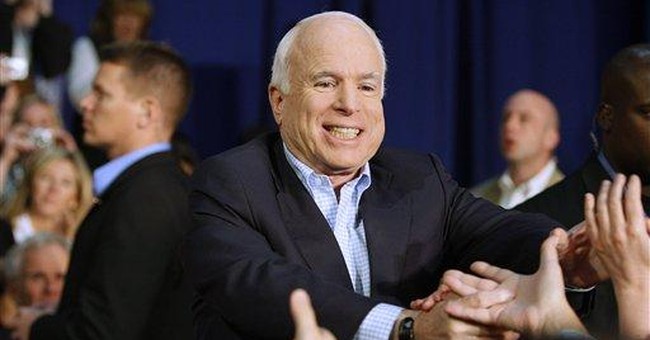 Sometimes the right candidate comes along at the wrong time. They have just the amount wisdom and experience, gained over a lifetime of dedicated service to their country. They have placed party over principle, sacrificing short term political gains and making a clear demonstration of putting the American people ahead of their own career advancement. John McCain is such a good man; but unfortunately, this may not be his season of triumph.

Barack Obama, arguably a lesser candidate in terms of experience and judgment, nonetheless appeals to voters looking for a change. This popular sentiment has driven him from obscurity to celebredom in a remarkably short period of time. So quickly has Obama risen, in fact, that no ones really knows where he stands on crucial issues; in fact it can be argued that he himself doesn’t know where he stands, because he has never really had to take a stand in a time of crisis. He voted “present” on tough votes in the Illinois senate, passing on the blame, but not the credit for decisions made by that legislative caucus. He spoke out against the Iraq war, but conveniently after the vote had already been taken (no one knows what decision he would have made in the Democratic caucus had he been in office at the time of the vote). Nonetheless, his personal qualities, academic credentials and critical stance on the war brought him to prominence, as news of the carnage in20Iraq, the wounded veterans returning, and astronomical war costs drove Americans to question our nation’s decision to go to war.

John McCain, to his credit, was also critical of the Iraq war but more responsible in his criticism than Senator Obama. As a former navy pilot and prisoner of war, he knows all too well the true costs that armed confrontation inflict both on the victor and the defeated. He does not take the decision to go to war lightly. He has demonstrated a far better understanding of the operational requirements of a war time footing, as well as the geopolitical implications of various decisions. He knows that we just can’t go and bomb Pakistan in hopes of taking out Osama Bin Laden without Pakistani government approval. He understands why the course of action in Pakistan< /st1:country-region> is so complicated. Furthermore, Senator McCain was outspoken in his criticism of former Secretary of Defense Donald Rumsfeld, who arguably mishandled the execution of the war in a way that opened Iraq up to the insurgency we are experiencing today. Rumsfeld’s “unknown unknowns” were not in fact unknown to Senator McCain, who understood that post-war security, “take and hold,” was essential for creating stability in Iraq, and preventing the conflict from spilling over into the region. Under Secretary Rumsefeld’s leadership that is certainly what happened.

While Senator McCain is arguably the better of the two candidates on security and foreign policy, this war has had significant domestic economic effects. For one, because of the ongoing conflict, we have been unable to fully exploit the oil resources of Iraq. Moreover, some of Iraq’s neighbors and friends in the U.N., such as Venezuela, have gone to fought us economically, by restricting the oil production from their own reserves. To make matters worse, China’s growing economy has placed increased demands on the world’s already tight energy supply. While not a direct consequence of the Iraq war this factor has certainly impacted the supply and price of oil.

The fact of the matter is that the American electorate has come to view the war in economic, rather than merely political terms. The threat of terrorism is seen as secondary to America’s economic security. This is where Obama obtains his major advantage. Se nator McCain has admitted that he is not as strong on economic issues. Moreover, his chief economic advisor, Senator Phil Gramm, put his foot in his mouth when he demonstrated a complete lack of empathy with the plight of the American worker, calling this a “mental recession” that had no basis in economic reality. The facts on the ground in recent months have certainly indicated otherwise, and further expose Senator McCain to the accusation that he just doesn’t get it on domestic economic issues.

Furthermore, Senator McCain’s free market stance, normally a boon to Republicans, seems to go in the face of the obvious misdeeds of major corporations in fanning the housing crisis. It is almost universally admitted that the housing crisis stemmed from unchecked greed, in terms of the capital markets extending too much credit to individuals who they knew did not have the ability to repay their debt. Just about the only thing that can prevent this from occurring in the future is more regulation. And this is something that Senator McCain absolu tely hates. In making his case for how he will deal with the housing crisis, Senator McCain has used the words “oversight” and “reform”, but never, ever “regulation.” One questions whether oversight without an effective regulatory framework is really enough of a solution to the market debacle. The reform he proposes is really about taking minor actions to improve America’s social and economic condition without radical or revolutionary change. And it corresponds with his assertion that the U.S. economy is “fundamentally strong.”

Senator McCain thus finds himself somewhat boxed in. The gains made in Iraq in recent months, with troop levels down to pre-surge levels without a recurrence in violence, almost don’t count right now. Moreo ver, the dire economic situation seems to call for a radical solution, not a mere patch up of the system. These conditions play perfectly into Senator Obama’s hands, and it seems all he has to do is play it safe over the next few weeks in order to win. Senator McCain, on the other hand, has been forced to take a series of risks, which not only have made him look desperate (which he is not), but also taken his campaign off message and into defensive posture. If this keeps up, we will be reading his epitaph come November.