Who Wronged Aurora and Why Her Life Matters 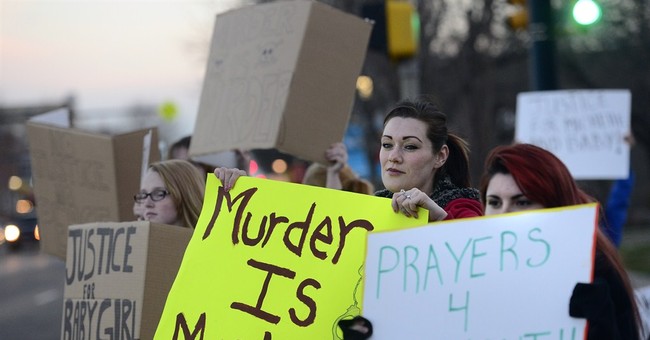 By now the horrific story about Michelle Wilkins’ 7 month old preborn Aurora being ripped from her mother’s womb in Colorado has dominated headlines throughout the country. Dynel Lane, the perpetrator, was charged with eight felonies by the Boulder County District Attorney’s office. Yet one charge was visibly missing: the murder of baby Aurora. A new poll reveals that 76% of Americans agree that an attacker who causes the death of a woman’s preborn child should be charged with murder. Colorado has devastatingly failed Aurora.

Michelle Wilkins’ story is tragic. Wilkins, 26, answered a fraudulent Craigslist ad for baby clothes. When she arrived at Lane’s home, Lane viciously attacked her, slicing Wilkins’ abdomen and removing Aurora. Wilkins bravely willed herself to live, partially because she was unaware that her baby was ripped from her womb.

Because Colorado does not have a fetal homicide law, Boulder County District Attorney Stanley Garnett said that “essentially there is no way murder charges can be brought if it’s not established that the fetus lived as a child outside the body of the mother for some period of time.” It should be noted that Garnett has been endorsed by Planned Parenthood and NARAL, and has opposed Colorado’s fetal homicide bill.

Boulder County Coroner Emma Hall said in a news release, “At this time neither the autopsy or the investigation have provided any evidence that the baby exhibited any signs of life outside of the womb, therefore the circumstance is not being considered a live birth…No evidence of trauma or injuries were found on the body. Final autopsy results will be released once all testing and further studies are complete.” Who is Hall and when will the final autopsy results be released? Of note, Lane's defense attorney, Kathryn Herold, requested that a defense expert be present during the autopsy. Was Wilkins’ attorney also present?

The facts of the case as described in the police report tell a different story in contradiction to Hall’s report that it was not a live birth. When Lane’s husband, David Ridley, arrived on the scene he found Aurora in the bathtub and “rubbed the baby slightly then rolled it over to hear and see it take a gasping breath,” the police affidavit stated. This obviously indicates that Aurora was born alive.

The affidavit stated that Wilkins arrived at Lane’s house at 11:51 AM and that Ridley’s observation of hearing and seeing Aurora take a “gasping breath” happened sometime after his arrival at 2:15 PM. In order for that to have occurred, Aurora must have been born alive and survived for around two and a half hours outside of the womb. Aurora was born alive.

If no trauma or injuries were found on baby Aurora’s body and she was said to have taken a “gasping breath,” why would there be any reason to think that Aurora was not born alive? If not, then what was the exact cause and manner of the baby’s death? It was cold-blooded murder.

Further, the affidavit also states that the hospital staff said the 34 week gestation baby was "approximately 7 months old and would have been viable." Preemies as young as 22 weeks gestation have survived outside the womb.

The crime itself was a grave injustice against Michelle and Aurora, further aggravated by the way that Colorado’s DA ignored Aurora’s murder. Even though he said it was “not possible under Colorado law [to file homicide charges] without proof of a live birth,” what more proof do you need than the first-hand witness of the criminal’s husband which is recorded in the police affidavit?

Further, the argument about Aurora being born alive would have been inconsequential to the charge if Colorado had a fetal homicide law. Such a law would have automatically recognized Aurora as a separate victim of a crime by the mere fact that she was brutalized in the womb. However, Colorado Democrats rejected a fetal homicide bill in 2013.

The general public’s natural reaction of horror to the brutal attack on Michelle Wilkins and baby Aurora should serve as a reminder that all human life is precious, born and preborn. In fact, the same poll also reveals that 66% of Americans think that “fetuses in the womb are people.”

Baby Aurora gasped for breath. Lane should be charged for Aurora’s murder by that fact alone even without a fetal homicide law on the books. Further, this attack must also serve as an impetus for passing fetal homicide laws in Colorado and the other 11 states that do not have them yet, in memory of Aurora. Her life matters.