Deranged Anti-Trumpers Need to Get Out More

Ann McElhinney
|
Posted: Jul 05, 2018 11:20 AM
Share   Tweet
The opinions expressed by columnists are their own and do not necessarily represent the views of Townhall.com. 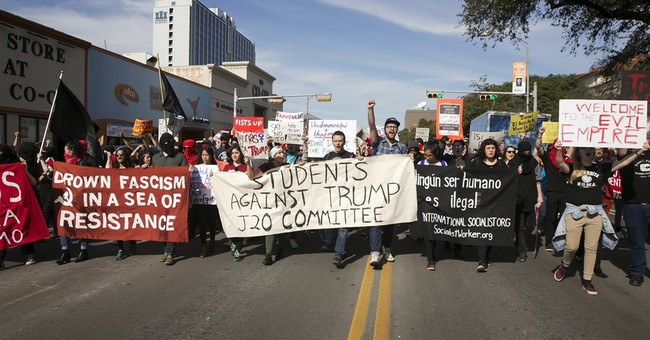 Travel is fatal to prejudice, bigotry, and narrow-mindedness. -Mark Twain

Self titled progressives or anti-Trumpers really need to get out more - they need to travel. Not to an Ashram in Katmandu, or the Ganges, or the Rainforest as is their wont. No, they need to get to Des Moines, Sioux Falls, Evansville or their voyage could even be around their own family table or neighborhood, meeting people who are not card-carrying Democrats, people who didn’t feel the need to wear all black on Nov. 9, 2016 (yes that actually happened in a major Hollywood establishment).

For the good of the country progressives need to get out more.

A group of Harvard students did. They recently toured the heartland to learn about the ‘other’ America. Many had never met a gun owner, never mind a Trump voter. They created a hashtag that described their experience, #IOPening. Shocker, turns out the ‘other’ isn’t deplorable at all.

It’s an important lesson. With the election of Donald Trump many liberals have dumped parents, siblings, friends and colleagues for the sole reason that they supported Trump. It’s horrible and hurtful and unfair. It’s really deplorable. And the dumping didn’t happen after a sober, civil, considered conversation or debate. It’s a summary judgement.

I recently met a lovely man in Northern California, whose grown children haven't spoken to him in over a year. He writes, sends messages of love and concern and his adult daughters won’t write back. They didn't even have a fight, they just stopped talking to him. He is heartbroken.

It’s happened to me. I wasn’t even a full-on Trump supporter when an Italian friend who I had shared an apartment with 30 years ago sent me a message out of the blue telling me we were done, she couldn't be friends with me anymore because of Trump. Apparently I had posted something on Facebook that was not sufficiently anti-Trump and she didn’t want a discussion, she was done. She's not the only one.

I wasn't a fan of Trump's at the beginning, I was more of a Ted Cruz fan back then. The person that made me rethink my position was my dear friend, the late Paul Bender from Newport Beach. Paul ran a successful small business. He was a kind, gracious, generous and loving man and he was a serious man too. He was lots of fun but with nothing brash or crude in his behavior. He wanted Trump to be president, knew he would be and happily lived long enough to see that happen. Paul being such an early adopter gave me pause. If Paul Bender liked Trump I really needed to give the candidate another look.

Another Trump supporter I know is a substantial donor to the Gosnell Movie. His donation earned him an early sneak peek screening of the movie. He picked us up from the airport in the New England city where he lives and brought us to his home, in his kitchen he asked if we could pray. I have traveled all over the country with the movie and in my head I was thinking, 'I know what's about to happen here', it happens all the time. People have prayed for me and for the success of the Gosnell movie. But this time was different. I can't remember the exact words this gentleman used but his prayer was one of thanks to God that Trump was president. Here was a man of devout faith and his repeated prayer now was one of gratitude for President Donald Trump. It was an eye opener, it shouldn't have been. I wished then as I have wished often since that the angry anti-Trump mob would get to meet this man of God, to know him, to listen and maybe to learn something. But they never will because they think people with faith are stupid and narrow minded. However in my experience they tend to be farsighted and open to worlds outside their comfort zone because they are very, very secure in their faith. And they are smart enough to know the difference between a secularist businessman who listens and an anti-Christian dishonest know-it-all.

It tells you a lot about liberals that they would ostracize a loved one who supports Trump. But I have yet to hear of a Trump supporter who stopped talking to a friend because of their support for Hillary Clinton.

That tells you a lot about conservatives.

Ann McElhinney is the producer of the feature film  Gosnell: The Trial of America’s Biggest Serial Killer about abortion doctor Kermit Gosnell. It opens nationwide on October 12th. www.GosnellMovie.com