Ann Coulter
|
Posted: May 29, 2019 4:15 PM
Share   Tweet
The opinions expressed by columnists are their own and do not necessarily represent the views of Townhall.com. 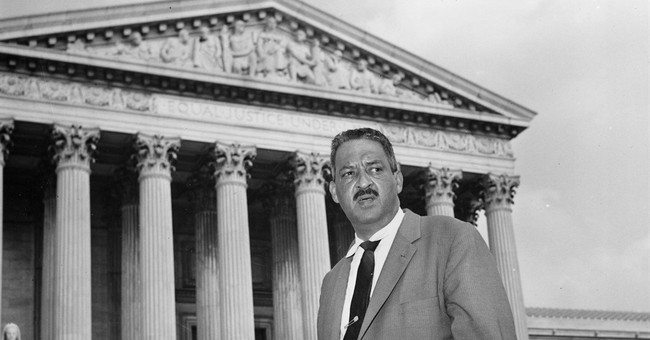 Over Memorial Day weekend, some shocking news broke about the Rev. Martin Luther King Jr. David Garrow, Pulitzer Prize-winning King biographer, came across some new details about the FBI's secret bugs of King in the National Archives. (The full tapes are not scheduled for public release for about another decade.)

With every statue in the country of Robert E. Lee being hauled off and sold for scrap, first, I would like to say that I oppose the removal of MLK's statue from the Washington Mall.

But the latest revelations also present me with a fantastic opportunity to renew my proposal that we replace Martin Luther King Day with Thurgood Marshall Day!

In addition to the fact that Marshall worked closely with J. Edgar Hoover to expel communists from the NAACP -- while King's organization was bristling with them, to the immense annoyance of President John F. Kennedy -- Marshall redeemed blacks' civil rights the American way: by winning his battles in court.

That's how it's supposed to be done in a country of laws. We're not French.

As described in my book Demonic: How the Liberal Mob Is Endangering America, Marshall, with his eloquent legal arguments, is the true heir to our founding fathers. He argued case after case before the Supreme Court, winning landmark victories, such as Brown v. Board of Education, that rapidly improved the lives of all black Americans.

Martin Luther King Jr., though an inspiring orator, was heir to the French Revolution, using street protests to advance political change. That's why Marshall dismissed King as an "opportunist" and "first-rate rabble-rouser," according to Taylor Branch's book, Parting the Waters : America in the King Years 1954-63.

After witnessing Connor's tactics, the good people of Birmingham removed him from office as quickly as they could. First, they voted to eliminate his office entirely. Then, when he ran for mayor, they decisively voted against him.

It was over. Decent Alabamians had won.

But King decided to provoke the lunatic Connor one more time, in the remaining days of his public service.

City merchants, including the black millionaire A.G. Gaston, begged King to call off the Birmingham protests on the rather obvious grounds that Connor had already been beaten at the ballot box. President Kennedy's Justice Department did, too.

King refused. His movement was dying, and he needed a major public spectacle to keep it going.

With television crews crawling all over Birmingham, King arranged for hundreds of black children to march on the town. As expected, this led to a massive conflagration when Connor turned fire hoses and police dogs on little kids, some as young as 6 years old. The explosive images were instantly broadcast around the world.

The demented Connor was delighted, too -- the protests helped him rally his dwindling racist following.

The only people who weren't happy were the citizens of Birmingham, both black and white.

Liberal destruction from Karl Marx to the Weather Underground traces its history back to Jean-Jacques Rousseau and the French Revolution. They would achieve perfect freedom ... at the sharp edge of a guillotine.

The French Revolution was spontaneous, impulsive, passionate, emotional, utopian, resentful, angry, dreamy -- anything but rule-bound and reasoned. No one knew, from one year to the next, where the revolution was heading. That's why, at the end of it all, the French enthusiastically threw themselves into the arms of Napoleon, a dictator.

By contrast, Americans were thinkers and debaters. They began their revolution with a legal document, the Declaration of Independence, which exhaustively explained "the causes" that impelled "the separation." It ended with the Articles of Confederation, and then a Constitution, meaning we have agreed-upon rules, continuity and stability.

And we had the principle that all men are equal before God. For about a century, it was a principle often honored more in the breech than in the observance. That is, until the clever barrister Marshall came along, went to court, and demanded that America live up to its ideals.

King's protests had the unfortunate effect of giving violent street agitation a halo. Now every idiot smashing a Starbucks window thinks he's a civil rights champion. But it was Marshall, doing it the American way, who changed the world.

As Marshall said, civil rights was serious business -- and King was "a boy on a man's errand."