Ann Coulter
|
Posted: Mar 14, 2018 4:00 PM
Share   Tweet
The opinions expressed by columnists are their own and do not necessarily represent the views of Townhall.com. 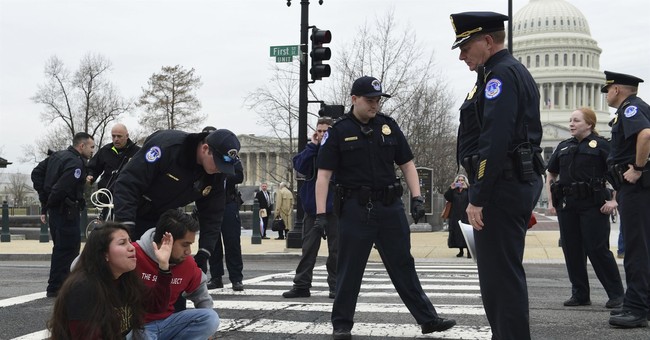 It was like neither of them had ever heard of Nikolas Cruz. The Parkland, Florida, school shooter is our most recent case study of what happens when liberals start babbling about "institutional racism."

There's never been such an incredible paper trail as there is with Cruz, leading straight from idiotic liberal ideas directly to mass murder. We know that Broward County Public Schools knew about Cruz's felonies. We know that his behavior wasn't reported because it would negatively impact the record of a student of color. The school district bragged about the policy.

Perhaps having no criminal record would have helped Cruz get a good job someday. But it is a fact that one of the consequences of not reporting his crimes was that HE COULD GET A GUN.

Unless liberals are going to say that guns had nothing to do with the Parkland shooting, it was the racial bean-counting in school discipline that unleashed this psychotic on innocent students and teachers at Marjory Stoneman Douglas High School four weeks ago.

"Let's say" -- lots of serious journalism begins with "let's say" -- "there's a disruption in the classroom and a bunch of white kids are disruptive and they get punished, you know, go see the principal. But the black kids are, you know, they call in the cops. I mean, that's the issue: who and how the kids who disrupt are being punished."

I remember this plot on "Law & Order," but there aren't many examples of it in real life.

Teachers in St. Paul, Minnesota, have been hospitalized and permanently disabled by their "disruptive" African-American students, thanks to former St. Paul Public Schools Superintendent Valeria Silva's commitment to ending the "school-to-prison pipeline."

One kid was "disruptive" by punching and strangling a science teacher, John Ekblad, giving him a concussion and permanent brain injuries. The African-American student walked away from Ekblad's body splayed out on the floor, saying, "Did you see me slam that white-ass teacher?"

This "disruptive" rascal was sentenced to 90 days house arrest and probation. Luckily, he wasn't punished more severely, or he might have ended up on the "school-to-prison pipeline." I'm sure he's doing well now.

A popular grade-school teacher, Debbie York, had to undergo repeated surgeries after an 85-pound first-grade student of color assaulted her when she tried to intervene as he was throwing furniture and biting other children. He threw a chair at York, missed her, then body-slammed her, causing permanent injuries.

While on sick leave after the incident, York emailed parents to explain why she was gone. For informing parents about the assault in class, she was promptly cashiered from her 30-year teaching career.

What matters isn't the safety of teachers and students. Nor is it whether anyone is learning anything. All that matters is that no one ever writes down the bad behavior of black and brown students.

When public school teachers -- not a conservative bunch -- in Minnesota -- not a conservative state -- are showing up in a boiling rage at school board meetings to complain about their African-American students having carte blanche to bully and defy them, the problem may not be that our schools are being run by Bull Connor.

One teacher, David McGill, complained that an out-of-control African-American fourth-grader had "significantly compromised an entire year of science instruction for the great majority of his classmates." He said there was nothing he could do about it because of the school's racial quotas on student discipline.

Superintendent Silva's response was to get snippy about the teacher's word choice:

"You said they are 'infecting' other children. I almost fell out of my chair," Silva said.

"Doesn't matter. You said it."

Eventually, the school district had to buy off Silva with a $800,000 severance agreement just to get her to leave. It was her or the teachers.

CBS's Stahl is either an ideologue, intentionally painting a picture that is the polar opposite of the truth by implying that students of color are the true victims here -- or else she is so stupid and untutored in the subject that she has no business reporting on it. I could go either way. Your choice. (We need an expression for this sort of broadcast. Something like ... FAKE NEWS!)

A smart Republican would be dying for liberals to bring up the "school-to-prison pipeline." The more it is talked about, the more ripe the insanity becomes.

A kid expelled from high school is twice as likely to end up in prison!

NO! It's keeping a record of his crimes that's the problem! By the time he becomes an adult, he has no choice.

No Democrat should be allowed to run for election this year without taking a position on Parkland's "school-to-prison pipeline" policy.

Worried about suburban moms, Republicans? Make the Democrats defend a toxic ideology that prohibits students of color from being arrested for their criminal acts. They'll either defend it and lose the parents, or they'll oppose it and lose their George Soros funding.

Republicans should pray that the Parkland shooting comes up in debates. You hear "Parkland," and you say: "Let's talk about the 'school-to-prison pipeline.'" You hear, "equity in school discipline," and you say: "Nikolas Cruz."