Casting Call For Another Anita Hill

Ann Coulter
|
Posted: Oct 12, 2016 8:16 PM
Share   Tweet
The opinions expressed by columnists are their own and do not necessarily represent the views of Townhall.com. 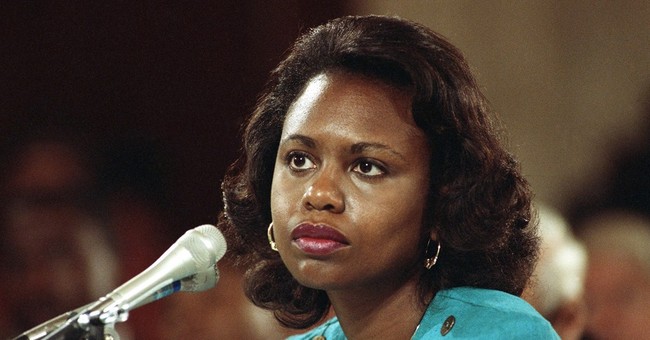 Donald Trump is the only hope to save America, so the media have gone to war to stop him.

They don't care about being exposed as lying, hypocritical swine -- I'd describe them more fully, but it would require locker room talk. They'll win the public back later. Right now, all that matters is stopping Trump.

The same media that are pretending to consider the use of a bad word equivalent to rape don't give a fig about real rape, real sexual assault, real whoring, even real homicide, depending on who did it.

JFK was an STD-infected drug addict who cavorted with whores at the White House, but the media ferociously hid all this from the public, publishing fairy-tale versions of his presidency as "Camelot.”

And what happened to the 11-year rule? Trump said the word "p*ssy" 11 years ago, in a secretly recorded conversation. Eleven years before Sen. Teddy Kennedy ran for president, he killed a girl -- but he ran, not only without apology, but, indeed, as the Conscience of the Democratic Party.

Throughout 2009, good, decent Americans who happened to oppose Obamacare were called the name of a gay sex act hundreds of times on TV -- and that was just on MSNBC. CNN's Anderson Cooper made the reference explicit when he giggled, "It's hard to talk when you're tea-bagging.”

Among the people using this sexual slur were distinguished members of Congress such as U.S. Sen. Robert Menendez and Rep. Barney Frank. Were they fit to hold office?

Going way, way, way back to a few weeks ago, the same media gasping in horror at "p*ssy" sure didn't mind my being called a c*nt repeatedly on a Comedy Central broadcast. And when I say "didn't mind," I mean they thought it was awesome.

A few years ago, Sen. Al Franken joked on a Comedy Central roast about producer Rob Reiner butt-f*cking his children. Does Hillary think he's fit to be a U.S. senator? Is he fit enough for the Senate Committee on Environment and Public Works, but not the Senate Finance Committee?

None of these were leaks of secretly recorded conversations -- considered a hanging offense in the Clinton years. These vulgarities were intentionally, publicly broadcast by the same media that, today, pretend to need smelling salts after hearing "p*ssy."

At least this new puritanical standard explains why rappers like Jay Z are banned from the White House. Wait — what?

Perhaps realizing their Victorian virgin act wasn't cutting it, the media turned to their Pretend We Don't Understand English method of argument, and claimed that Trump was confessing to having committed a "sexual assault”!

Like most of Trump's bragging, his loutish boast was not intended to be taken seriously, nor was it. Far from whipping out his pencil and carefully taking notes, "Access Hollywood"'s Billy Bush laughed. The gist of what Trump was saying is that -- hold onto your hats! -- women like to sleep with celebrities! I don't know if you've heard that before.

At least we're back to the media pretending to care about sexual assault -- until further notice.

This is the same media that ran interference for an actual sexual predatorin the White House, ignoring Bill Clinton's serial pants-dropping, groping and raping for nearly a decade, while gleefully vilifying his accusers, and would have been happy to continue if Bill Richardson had become president. Clinton talking about p*ssy was one of his more dignified moments, proudly attested to by his friend Vernon Jordan in a nationally broadcast interview with Mike Wallace.

In the pages of The New York Times, feminist icon Gloria Steinem announced the "one-free grope" rule, specially developed for the Clinton era.

Former Time magazine correspondent Nina Burleigh said of Clinton, "I would be happy to give him a bl*w job just to thank him for keeping abortion legal.”

Time magazine's Margaret Carlson said Linda Tripp had "lost membership in the family of man" for secretly tape-recording Monica Lewinsky. Tripp kept the recordings not for something so exalted as stopping Trump, but to protect herself from a charge of perjury.

When Clinton was credibly accused of rape by Juanita Broaddrick, NBC strategically held the story -- until a week after the Senate had voted in the rapist's impeachment trial. All the public could do was helplessly sport "Free Lisa Myers" buttons, referring to the investigative reporter who got the interview.

Explaining NBC's incomprehensible decision to hold its own investigative report, Myers told Broaddrick: "The good news is you're credible. The bad news is that you're very credible.”

Asked by FNC's Bill O'Reilly why he never got around to mentioning that the commander in chief was, more likely than not, a rapist, Rather said, "When the charge has something to do with somebody's private sex life, I would prefer not to run any of it.”

So according to our media, committing a rape is "somebody's private sex life," but using a bad word is rape.

Poor Billy Bush has to be fired from NBC's "Today" show so the media can pretend that Trump's using bawdy language is a very, very serious offense.

Meanwhile, Billy's ex-president uncle and cousin openly fraternize with the rapist. The second President Bush calls Bill Clinton his "brother from another mother" and praises Clinton's "character" -- something even Clinton's defenders never did with a straight face.

Now the networks are holding casting calls for some loon willing to falsely accuse Trump of sexual assault, so they can hype it like the Duke lacrosse case, Mattress Girl and Rolling Stone's fraternity rape. Unfortunately -- for us, fortunately for the media -- by the time the truth comes out, the election will be over.