Ann Coulter
|
Posted: Oct 05, 2016 8:53 PM
Share   Tweet
The opinions expressed by columnists are their own and do not necessarily represent the views of Townhall.com. 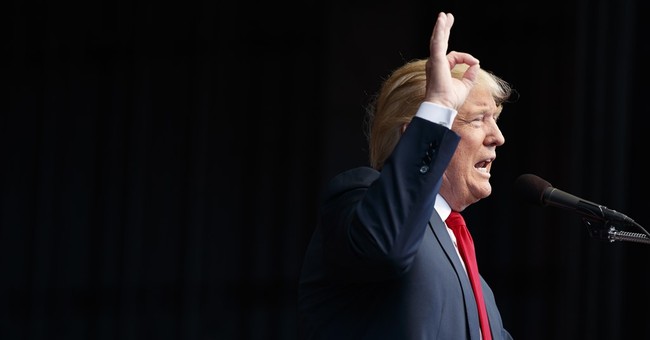 Trending
Reviewing the state of the presidential race, I see that very little has changed for the past year. Every few weeks, the media roll out a new Trump "scandal" that has already been thoroughly covered, day in, day out, for the last 15 months.

In fact, all of the shocking new Trump scandals were aired in the very first GOP presidential debate, where he was asked seven questions about the following charges:

(3) He said nice things about Obamacare. (Since dropped by the media in order to help Hillary avoid the subject.)

(6) He is not a Republican. (Also since dropped -- Hillary's losing enough Democrats to Trump without reminding them that he's not a "real Republican.”)

All that's already been priced into the Trump brand. What new results do the media expect from telling us that Trump not only insulted Rosie O'Donnell, but also insulted Hispanic Mattress Girl, Alicia Machado: baby mama to a Mexican drug lord?

The only advance in the narrative is that the octaves of journalists' voices keep getting higher, as they repeat the exact same attacks on Trump.

Each time, the media claim victory by asserting with bland certainty that any drop in Trump's poll numbers is because of something very upsetting to journalists, but which is generally quite popular with voters -- the Mexican rapists speech, the Muslim ban, and his response to the choleric Muslim, Khizr Khan.
CARTOONS | AF Branco
View Cartoon

The media can tell us where the candidates stand in the polls. They can't tell us why. Nonetheless, they insist on identifying the precise statement of Trump's that has caused any setback, which always happens to be whatever the media is being hysterical about.

Most absurd was the widely repeated claim that Trump's "insult" of GOLD STAR DAD Khizr Khan caused him to dip in the polls. Except the problem is: (1) He didn't insult Khan; and (2) anyone who occasionally leaves his apartment realizes that no one would have minded if he had.


At the Democratic Convention, Khan waved a copy of the Constitution, asking Trump, "Have you even read the U.S. Constitution? I will gladly lend you my copy. In this document, look for the words, 'the right of all Muslims in the world to move to America shall not be abridged!’"


Actually, that's not in the Constitution. Incomprehensibly, Khan told Trump to look for the words "liberty" and "equal protection of law" -- words that are noticeable for not mentioning "the right of all Muslims in the world to move to America.”


He rounded out his harangue saying to Trump: "You have sacrificed nothing and no one!”


In an article titled "Ire for Trump as He Derides Muslim Parents," The New York Times described Trump's response to Khan as "startling," and said it "drew quick and widespread condemnation." This included a tweet from Bush speechwriter Peter Wehner, calling Trump "a man of sadistic cruelty. With him there's no bottom. Now go ahead and defend him.”


I must have accidentally been out of the country for a few days because I missed the part where Trump insulted the Khans.

But according to the Times, Trump was "derid(ing)" the Khans when he went on "Good Morning America" and called the snarling Muslim a "nice guy," wished him luck, wondered why his wife didn't say anything, and talked about the reasons Americans might want to hit the pause button on mass Muslim immigration.

I understand why the media are upset that Trump mentioned these notable contributions of Muslim immigrants, but unless I don't know the country at all anymore, I do not believe a majority of Americans minded one bit.

The media are betting that after 9/11, the diaper bomber, the shoe bomber, the Boston Marathon, Fort Hood, Chattanooga, San Bernardino, the Orlando nightclub, the Chelsea bombing, and the recent mall attacks in both Minnesota and Washington, the revulsion of the American public to anti-Muslim bigotry will be a HUGE factor in this election.

Journalists swim in a sea of agreement. They don't stop to think that the identity politics they majored in back in college might not be popular with all Americans.


Polls showed a post-convention bounce for Hillary before Trump had said word one about Khan. Perhaps their nonsense headlines about Trump attacking a GOLD STAR FAMILY also helped them in the short run.

But as soon as the public found out that it was this specific family and, also, that Trump didn't attack them, voters weren't mad at Trump, but they sure were with the media.