Liberals: If The Shoe Doesn't Fit, Make Everyone Wear It 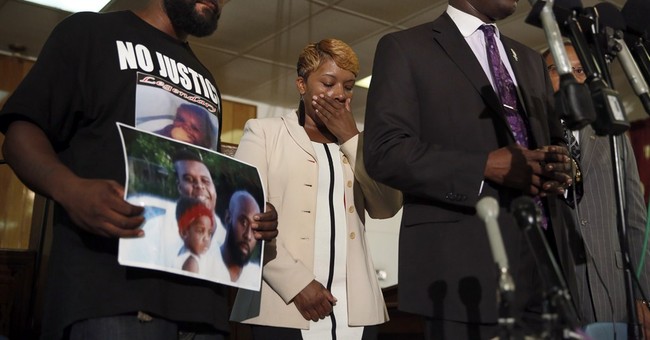 It is a common practice of the left to stage an incident and then demand enormous legal changes to respond to their hoax.

Griswold v. Connecticut was a scam orchestrated by Yale law professors to challenge the state's anti-contraception law. The case was a fraud: The law had never been enforced and never would have been enforced, until the professors held a press conference announcing they were breaking the law.

But we still got the new constitutional "privacy right" which, less than 10 years later, transmogrified into a constitutional right to kill an unborn baby.

The premise of that case, Roe v. Wade, was also a hoax. Norma McCorvey lied about being raped to get an abortion in Texas, but was denied because there was no police report. There was also no rape: She had gotten pregnant for the third time by her mid-20s as a result of a casual sexual encounter.

After Trayvon Martin was shot by George Zimmerman -- the "white Hispanic," since upgraded to full "white" by The New York Times -- liberals howled about Florida's "Stand Your Ground" law. The case had absolutely nothing to do with that law: Zimmerman wasn't standing his ground; he was lying on the ground having his head bashed in. The jury accepted Zimmerman's claim of self-defense and acquitted him.

The law of self-defense has been around since William of Orange ascended to the British throne in 1688. But liberals are still harping about the Trayvon Martin shooting to demand the repeal of Stand Your Ground laws.

Jamie Leigh Jones made fantastical claims about being fed Rohypnol, gang-raped and then held at gunpoint while working for KBR, a subsidiary of Halliburton, in Iraq in 2005. Without considering the likelihood of a military contractor doing this to an American citizen, knowing she'd get back to the U.S. someday and be able to tell her story, our adversary media and well-paid Democratic senators believed every word out of Jones' mouth.

As always happens when members of a disfavored racial and gender group -- i.e., white males -- are accused of heinous acts, liberals heard Jones' claims and concluded: Well, the one thing we know is: There was a gang-rape. All that's left to do now is to investigate the military/fraternity/lacrosse rape culture.

Thus, for example, Sen. Patrick Leahy began a hearing on Jones' insane accusations with this statement of facts: "Jamie Leigh Jones [is] a young woman from Texas who took a job at Halliburton in Iraq in 2005 when she was 20 years old. In her first week on the job, she was drugged and then she was gang-raped by co-workers. When she reported this -- remember, 20 years old -- she reported this assault, her employers moved her to a locked trailer, where she was kept by armed guards and freed only when the State Department intervened."

Sen. Al Franken raved about "the culture of impunity" among defense contractors, saying, "Jamie Leigh Jones was gang-raped by KBR employees." Sen. Sheldon Whitehouse helpfully added, "But as best I can tell, there is no legitimate intelligence function that involves rape."

And then, after all the grandstanding, it turned out Jones had made the whole thing up. DNA evidence proved she'd had sex with only one man, and he said it was consensual. The female doctor who examined Jones the day after the alleged attack found no traces of Rohypnol in her system. Both the female doctor, as well as Jones' own plastic surgeon back in Houston, contradicted Jones' claim that her breast implants had been ruptured. It also turned out that none of KBR's employees carry guns, much less machine guns. By the age of 20, even before Jones had left for Iraq, she was 0-for-2 on rape allegations, having already falsely accused two other men of raping her.

No grand jury would indict the poor, falsely accused KBR employee who foolishly had sex with Jones, so she filed a civil suit against that one man. The jury ruled for him, and the court ordered Jones to pay $145,000 in legal costs. Jamie Leigh Jones' place in the Crystal Magnum, Tawana Brawley Hall of Fame was thus secured.

But we still got Sen. Al Franken's pro-trial lawyer amendment to a Defense Department bill, touted as the "Anti-Rape Amendment," prohibiting military contractors from including mandatory arbitration clauses in their employment contracts. Any Republican brave enough to oppose this sop to trial lawyers was denounced as "pro-rape" in mass-phone calls to their offices and by liberal prophet Jon Stewart, who railed on his show, "How is ANYONE against this?"

Ferguson police officer Darren Wilson's shooting of Michael Brown is today being used as grounds to demand all sorts of new rules for cops. Most people had a pretty good sense of the case after seeing surveillance camera shots of Brown assaulting the manager of a liquor store he was robbing about 10 minutes before his encounter with Officer Wilson. By the time the grand jury documents were released, there was no serious doubt that the shooting was justified.

But again, as a result of a hoax racial incident, Democrats are demanding race quotas for arrests. To hell with due process. If we can stop just one thing that never happened from ever happening again, it will have been worth it.

The only new rule we really need is one to stop these infernal liberal hoaxes.