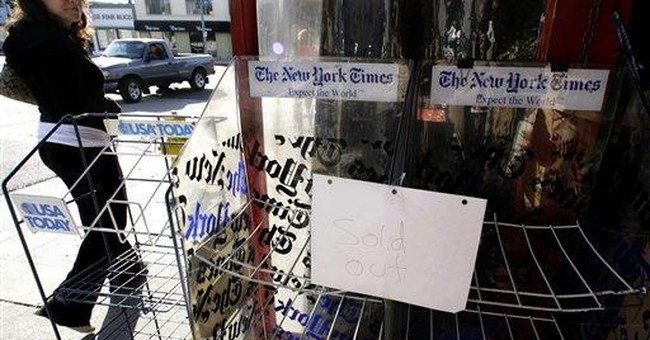 Perhaps instead of taking potshots at me in its Book Review section, The New York Times could consider reviewing one of my books. With only one review -- not in the Book Review -- after eight New York Times best-sellers, the editors can rest assured that I know they don't like me.

Reviewing a book about the 1989 rape of the Central Park jogger last week, the reviewer sniped that "coarser pundits like Ann Coulter continue to exploit the case whenever possible."

My chapter on the Central Park rape in my recently released, smash New York Times best-seller, "Demonic: How the Liberal Mob Is Endangering America," evidently "exploits" the case by citing facts. Based on those facts, I argue that the real trials reached more believable verdicts than the show trial held by the Left 13 years later.

On April 19, 1989, a 28-year-old investment banker went for a run through Central Park, whereupon she was attacked by a violent mob, savagely beaten, raped and left for dead. By the time the police found her at 1:30 a.m. that night, she was beaten so badly, she had lost three-fourths of her blood and the police couldn't tell if she was male or female. The homicide unit of the Manhattan D.A.'s office initially took the case because not one of her doctors believed she would be alive in the morning.

At the trials, evidence was ruled on by the judge and tested in court. Witnesses were presented for both sides and subjected to cross-examination.

One witness, for example, an acquaintance of one of the defendants, testified that when she talked to him in jail after the arrests, he told her that he hadn't raped the jogger, he "only held her legs down while (another defendant) f--ked her." (That's enough for a rape conviction.)

In the opposite of a "rush to judgment," two multi-ethnic juries deliberated for 10 days and 11 days, respectively, before unanimously finding the defendants guilty of most crimes charged -- though innocent of others. The convictions were later upheld on appeal.

The only way liberals could get those convictions overturned was to change venues from a courtroom to a newsroom. So that's what they did.

The convictions were vacated based not on a new trial or on new evidence, but solely on the "confession" of Matias Reyes.

Coincidentally, this serial rapist and murderer had nothing to lose by confessing to the rape -- and much to gain by claiming that he had acted alone, including a highly desirable prison transfer.

As with the tribunals during the French Revolution, the show trials were based on a lie, to wit, that Reyes' confession constituted "new evidence" that might have led to a different verdict at trial.

This is why prosecutor Elizabeth Lederer said in her summation to the jury: "Others who were not caught raped her and got away."

The only new information Reyes provided was that he was one of those who "got away."

But 13 years later, the show trial was re-litigated in the backrooms of law offices and newsrooms by a remarkably undiverse group of Irish and Jewish, college-educated New Yorkers. They lied about the evidence in order to vindicate a mob and destroy trust in the judicial system.

Liberals despise the rule of law because it interferes with their ability to rule by mob. They love to portray themselves as the weak taking on the powerful. But it is the least powerful who suffer the most once the rule of law is gone. (Dominique Strauss-Kahn is about to discover that the most defenseless, penniless immigrant has the same legal rights as he, in an American court.)

Liberals' relentless attack on the judicial system is yet another example of their Jacobin lunacy in opposition to calm order. You will note that they never ask: Who did what in this case? All they want to know is which class of people are on trial. Social justice is the only justice that interests the Left because it's the only justice that can be delivered by the political agitation of a mob.

Thus, the book about the Central Park rape warmly reviewed in the Times was described as raising the "fraught nexus of race, class and gender." It was said to take a "tour through America's violently racist past and present."

What on earth does any of that have to do with the evidence in this particular case?

Another way of determining the guilt or innocence of the convicted rapists would be to look at the facts of the case -- the confessions, the corroborating evidence, the state of DNA testing in 1989, the jury verdicts and Reyes' advantageously timed confession 13 years later.

But looking at actual facts in a criminal trial, as I did, apparently constitutes a coarse exploitation of the case.

I suppose writers who recount truthful facts about the Holocaust coarsely "exploit" that crime, too. Rather than reciting gruesome facts about the Holocaust, I gather the Times would prefer a book that examines the general characteristics of Jews and Germans from 1850 to 1933 -- a study of the "fraught nexus" of race, religion and nationality --- before deciding whether the Jews deserved it.