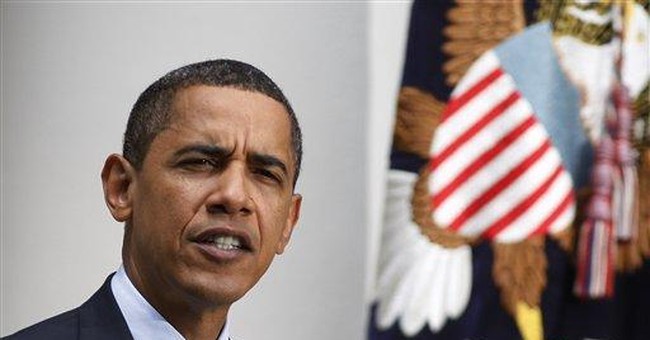 The reason seeing a doctor is already more like going to the DMV, and less like going to the Apple "Genius Bar," is that the government decided health care was too important to be left to the free market. Yes -- the same free market that has produced such a cornucopia of inexpensive goods and services that, today, even poor people have cell phones and flat-screen TVs.

As a result, it's easier to get your computer fixed than your health. Thanks, government!

So now, everyone expects doctors to be free. People who pay $200 for a haircut are indignant if it costs more than a $20 co-pay to see a doctor.

The government also "helped" us by mandating that insurance companies cover all sorts of medical services, both ordinary -- which you ought to pay for yourself -- and exotic, such as shrinks, in vitro fertilization and child-development assessments -- which no normal person would voluntarily pay to insure against.

This would be like requiring all car insurance to cover the cost of gasoline, oil and tire changes -- as well as professional car detailing, iPod docks, and leather seats and those neon chaser lights I have all along the underbody of my chopped, lowrider '57 Chevy.

But politicians are more interested in pleasing lobbyists for acupuncturists, midwives and marriage counselors than they are in pleasing recent college graduates who only want to insure against the possibility that they'll be hit by a truck. So politicians at both the state and federal level keep passing boatloads of insurance mandates requiring that all insurance plans cover a raft of non-emergency conditions that are expensive to treat -- but whose practitioners have high-priced lobbyists.

As a result, a young, healthy person has a choice of buying artificially expensive health insurance that, by law, covers a smorgasbord of medical services of no interest to him ... or going uninsured. People who aren't planning on giving birth to a slew of children with restless leg syndrome in the near future forgo insurance -- and then politicians tell us we have a national emergency because some people don't have health insurance.

Insurance plans that force everyone in the plan to pay for everyone else's Viagra and anti-anxiety pills are already completely unfair to people who rarely go to the doctor. It's like being forced to share gas bills with a long-haul trucker or a restaurant bill with Michael Moore. On the other hand, it's a great deal for any lonely hypochondriacs in the plan.

Now the Democrats want to force us all into one gigantic national health insurance plan that will cover every real and mythical ailment that has a powerful lobby. But if you have a rare medical condition without a lobbying arm, you'll be out of luck.

You don't have to conjure up fantastic visions of how health care would be delivered in this country if we bought it ourselves. Just go to a grocery store or get a manicure. Or think back to when you bought your last muffler, personal trainer, computer and every other product and service available in inexpensive abundance in this capitalist paradise.

Third-party payer schemes are always a disaster -- less service for twice the price! If you want good service at a good price, be sure to be the one holding the credit card. Under "universal health care," no one but government bureaucrats will be allowed to hold the credit card.

Isn't food important? Why not "universal food coverage"? If politicians and employers had guaranteed us "free" food 50 years ago, today Democrats would be wailing about the "food crisis" in America, and you'd be on the phone with your food care provider arguing about whether or not a Reuben sandwich with fries was covered under your plan.

Instead of making health care more like the DMV, how about we make it more like grocery stores? Give the poor and tough cases health stamps and let the rest of us buy health care -- and health insurance -- on the free market.