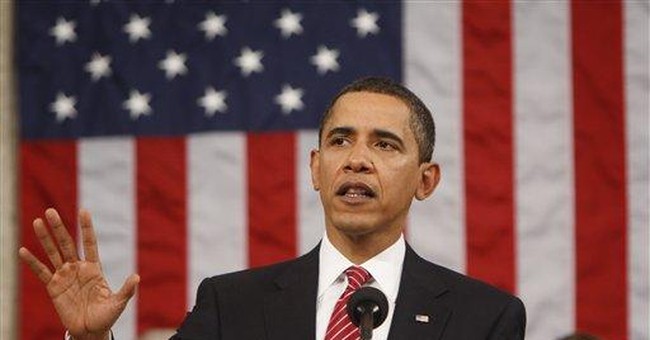 As Obama prepared to deliver his address to Congress on Tuesday, the Republican House Minority Leader John Boehner, Fox News' Bret Baier and Charles Krauthammer all gushed that history was being made as the first African-American president appeared before Congress.

Even Gov. Bobby Jindal, whom I suppose I should note was the first Indian-American to give the Republican response to a president's speech, began with an encomium to the first black president. (Wasn't Bobby great in "Slumdog Millionaire"?)

Are we going to have to hear about this for the next four years? Obama is becoming the Cal Ripken Jr. of presidents, making history every time he suits up for a game. Recently, Obama also became the first African-American president to order a ham sandwich late at night from the White House kitchen! That's going to get old pretty quick.

But as long as the nation is obsessed with historic milestones, is no one going to remark on what a great country it is where a mentally retarded woman can become speaker of the house?

Obama spent more than twice as much time in his historic speech genuflecting to the teachers' unions than talking about terrorism, Iraq or Afghanistan. So it was historic only in the sense that Obama is the first African-American president, but was the same old Democratic claptrap in every other respect.

After claiming that the disastrous stimulus bill would create or save 3.5 million jobs -- "more than 90 percent" in the private sector -- Obama then enumerated a long list of exclusively government jobs that would be "saved."

He was suspiciously verbose about saving the jobs of public schoolteachers. Because nothing says "economic stimulus" better than saving the jobs of lethargic incompetents who kick off at 2 p.m. every day and get summers off. Actually, that's not fair: Some teachers spend long hours after school having sex with their students.

As with the Clintons, Obama so earnestly believes in public school education that he sends his girls to ... an expensive private school. He demands that taxpayers support the very public schoolteachers he won't trust with his own children.

It is one thing to tell voters that school choice is wrong, because, you know, the public schools won't get better unless Americans sacrifice their children to the teachers' union's maw. But it is quite another for Democrats to feed their own kids to the union incinerator.

Consequently, no Democrat since Jimmy Carter has been stupid enough to send his own children to a public school.

And yet the stimulus bill expressly prohibits money earmarked for "education" to be spent on financial aid at private or parochial schools. Private schools might use it for some nefarious purpose like actually teaching their students, rather than indoctrinating them in anti-American propaganda.

The stimulus bill includes about $100 billion to education. By "education," Democrats don't mean anything a normal person would think of as education, such as learning how to talk good. "Education" means creating lots of useless bureaucratic jobs, mostly in Washington, having nothing to do with teaching.

The Department of Education alone provides more than 4,000 jobs that haven't the faintest connection with teaching. And now the stimulus bill will double the Education Department's funding. (For those of you who went to a public school, that means it will become twice as big.)

We've come a long way from Ronald Reagan promising to eliminate the Education Department, which itself was a Jimmy Carter sop to the teachers' unions.

Federal meddling in education has been an abject failure, so the Democrats' plan is to keep doing more of the same. If only there were some aphorism about people who fail to learn from history -- oh, well!

It can't be easy to reduce the educational achievement in America year after year, but the education establishment has done it! Yes they can!

Thanks to the hard work of thousands of government workers at the Department of Education and well-paid teachers' union employees, American schoolchildren perform worse on education tests for every year they spend in a public school.

It turns out that being in U.S. public schools has the same effect on people as hanging around Paris Hilton does.

In fourth grade, the earliest grade for which international comparisons are available, American students outperform most other countries in reading, math and science. Fourth-graders score in the 92nd percentile in science, the 58th percentile in math and the 70th percentile in reading, where they beat 26 of 35 countries, including Germany, France and Italy.

By the 12th grade -- after receiving the full benefits of an American education -- Americans are near the bottom. Let X represent the number of years spent in U.S. public schools, and Y represent average test scores in math and reading -- oh, never mind.

With an additional eight years of a public school education under their belts, Americans fall from the 92nd percentile in science to the 29th percentile. While American fourth-graders are bested only by South Korea and Japan in science, by 12th grade, the only countries the American students can beat are Lithuania, Cyprus and South Africa.

Which suggests that if public education were extended all the way through college, by the time a student gets to graduate school he might very well be qualified to be ... speaker of the house!