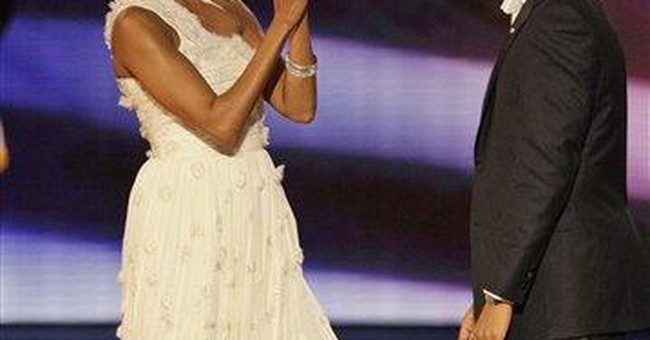 It will not be easy for President B. Hussein Obama. More than half the country voted for him, and yet our newspapers are brimming with snippy remarks at every little aspect of his inauguration.

Here's a small sampling of the churlishness in just The New York Times:

-- There is something to be said for some showiness in an inauguration. But one felt discomfited all the same.

-- This is an inauguration, not a coronation.

-- Is there a parallel between Mrs. Obama's jewel-toned outfit and somebody else's glass slippers? Why limousines and not shank's mare?

-- It is still unclear whether we are supposed to shout "Whoopee!" or "Shame!" about the new elegance the Obamas are bringing to Washington.

Obama's inaugural address tracked much of Reagan's first inaugural address -- minus the substance -- the main difference being that Obama did not invoke God as stoutly or frequently, restricting his heavenly references to a few liberal focus-grouped phrases, such as "God-given" and "God's grace."

Obama was also not as fulsome in his praise of his predecessor as Reagan was. To appreciate how remarkable this is, recall that Reagan's predecessor was Jimmy Carter.

Under Carter, more than 50 Americans were held hostage by a two-bit terrorist Iranian regime for 444 days -- released the day of Reagan's inauguration. Under Bush, there has not been another terrorist attack since Sept. 11, 2001.

But I gather that if Obama had uttered anything more than the briefest allusion to Bush, that would have provoked yet more booing from the Hope-and-Change crowd, which moments earlier had showered Bush with boos when he walked onto the stage. That must be the new tone we've been hearing so much about.

So maybe liberals can stop acting as if the entire nation could at last come together in a "unity of purpose" if only conservatives would stop fomenting "conflict and discord" -- as Obama suggested in his inaugural address. We're not the ones who booed a departing president.

It is a liberal trope to insult conservatives by asking them meaningless questions, such as the one repeatedly asked of Bush throughout his presidency about whether he had made any mistakes. All humans make mistakes -- what is the point of that question other than to give insult?

When will the first reporter ask President Obama to admit that he has made mistakes? Try: Never.

No, that question will disappear for the next four years. It will be replaced by the new question for conservatives on every liberal's lips these days: Do you want Obama to succeed as president?

Answer: Of course we do. We live here, too.

But merely to ask the question is to imply that the 60 million Americans who did not vote for Obama are being unpatriotic if they do not wholeheartedly endorse his liberal agenda.

I guess it depends on the meaning of "succeed." If Obama "succeeds" in pushing through big-government, terrorist-appeasing policies, he will not have "succeeded" at being a good president. If we didn't think conservative principles of small government and strong national defense weren't better for the country, we wouldn't be conservatives.

And why was that question never asked of liberals producing assassination books and movies about President Bush for the last eight years?

Say, did liberals want Pastor Rick Warren to succeed delivering a meaningful invocation at the inaugural?

The way I remember it, the Hope-and-Change crowd viciously denounced the Christian pastor, stamped their feet and demanded that Obama withdraw the invitation -- all because Rick Warren agrees with Obama's stated position on gay marriage, which also happens to be the position of a vast majority of Americans every time they have been allowed to vote on the matter.

Liberals always have to play the victim, acting as if they merely want to bring the nation together in hope and unity in the face of petulant, stick-in-the-mud conservatives. Meanwhile, they are the ones booing, heckling and publicly fantasizing about the assassination of those who disagree with them on policy matters.

Hope and unity, apparently, can only be achieved if conservatives would just go away -- and perhaps have the decency to kill themselves.

Republicans are not the ones who need to be told that "the time has come to set aside childish things" -- as Obama said of his own assumption of the presidency. Remember? We're the ones who managed to gaze upon Carter at the conclusion of his abomination of a presidency without booing.