The Best Man Turned Out To Be A Woman 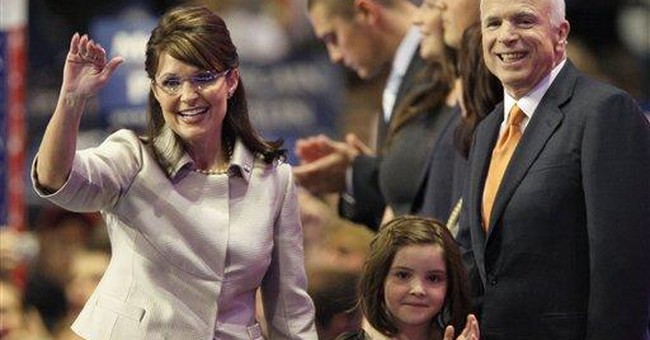 John McCain's choice of Sarah Palin, governor of Alaska, as his running mate finally gave Republicans a reason to vote for him -- a reason, that is, other than B. Hussein Obama.

The media are hopping mad about McCain's vice presidential selection, but they're really furious over at MSNBC. After drawing "Keith (plus) Obama" hearts on their denim notebooks, Keith Olbermann and Chris Matthews stayed up all night last Thursday, writing jokes about Minnesota Gov. Tim Pawlenty, the presumed vice presidential pick. Now they can't use any of them.

So the media are taking it out on our brave Sarah and her 17-year-old daughter.

They claimed Palin was chosen only because she's a woman. In fact, Palin was chosen because she's pro-life, pro-gun, pro-drilling and pro-tax cuts. She's fought both Republicans and Democrats on public corruption and does not have hair plugs like some other vice presidential candidate I could mention. In other words, she's a "Republican."

As a right-winger, Palin will appeal to the narrow 59 percent of Americans who voted for another former small-market sportscaster: Ronald Reagan. Our motto: Sarah Palin is only a heartbeat away!

As for former governor of Pennsylvania Tom Ridge and Democratic Sen. Joe Lieberman, the other also-rans, I can think of at least 40 million unborn reasons she's better than either of them.

Within the first few hours after Palin's name was announced, McCain raised $4 million in campaign donations online, reaching $10 million within the next two days. Which shortlist vice presidential pick could have beaten that?

The media hysterically denounced Palin as "inexperienced." But then people started to notice that she has more executive experience than B. Hussein Obama -- the guy at the top of the Democrats' ticket.

They tried to create a "Troopergate" for Palin, indignantly demanding to know why she wanted to get her ex-brother-in-law removed as a state trooper. Again, public corruption is not a good issue for someone like Obama, Chicago pol and noted friend of Syrian National/convicted felon Antoin Rezko.

For the cherry on top, then we found out Palin's ex-brother-in-law had Tasered his own 10-year-old stepson. Defend that, Democrats.

The bien-pensant criticized Palin, saying it's irresponsible for a woman with five children to run for vice president. Liberals' new talking point: Sarah Palin: Only five abortions away from the presidency.

They claimed her newborn wasn't her child, but the child of her 17-year-old daughter. That turned out to be a lie.

Then they attacked her daughter, who actually is pregnant now, for being unmarried. When liberals start acting like they're opposed to pre-marital sex and mothers having careers, you know McCain's vice presidential choice has knocked them back on their heels.

But at least liberal reporters had finally found someone their own size to pick on: a 17-year-old girl.

Speaking of Democrats with newborn children, the media weren't particularly concerned about John Edwards running for president despite his having a mistress with a newborn child.

While the difficult circumstances of Palin's pregnant daughter are being covered like a terrorist attack on the nation, with leering accounts of the 18-year-old father, the media remain resolutely uninterested in the parentage of Edwards' mistress's love child. Except, that is, the hardworking reporters at the National Enquirer, who say Edwards is the father.

As this goes to press, the latest media-invented scandal about Palin is that McCain didn't know her well before choosing her as his running mate. He knew her well enough, though admittedly, not as well as Obama knows William Ayers.

John F. Kennedy, who was -- from what the media tell me -- America's most beloved president, detested his vice president, Lyndon Johnson.

Until Clinton interviewed Al Gore one time before choosing him as his vice presidential candidate, he had met Gore only one other time: when Gore was running for president in 1988 and flew to Little Rock seeking Clinton's endorsement. Clinton turned him down.

To this day, there's no proof that Bill Clinton ever met one-on-one with his CIA director, James Woolsey, other than a brief chat after midnight the night before Woolsey's nomination was announced.

Barring some all-new, trivial and probably false story about Palin -- her former hairdresser got a parking ticket in 1978! -- the media apparently intend to keep being hysterical about McCain's alleged failure to "vet" Palin properly. The problem with this argument is that it presupposes that everyone is asking: "HOW DID THIS HAPPEN?"

No one's saying that.

Attacks on McCain's "vetting" process require the media to keep claiming that Palin has a lot of problems. But she doesn't have any problems. Remember? Those were all blind alleys.

Unfortunately, for the ordinary TV viewer hearing nonstop hysteria about nonspecific "problems," it takes a lot of effort to figure out that every attack liberals have launched against Palin turned out to be a lie.

It's as if a basketball player made the winning shot in the last three seconds of the game and liberals demand that we have a week-long discussion about whether the player should have taken that shot. WHAT IF HE MISSED?