Ann Brunett
|
Posted: Sep 07, 2021 3:00 PM
Share   Tweet
The opinions expressed by columnists are their own and do not necessarily represent the views of Townhall.com. 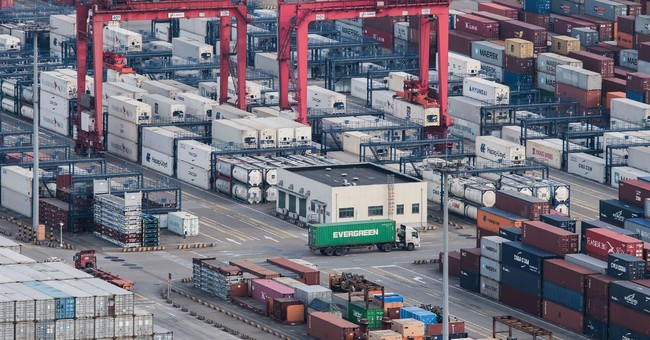 The global shipping crisis is deepening and shows no signs of relenting. The direct and negative effect this crisis has on importers, especially those who own small businesses, is profound.

Complicating things is that this is a complex, multifaceted crisis that touches many different parts of the shipping industry. Ocean lines, armed with unmitigated power to set policy that dictates global trade, are rulers of the roost. There is also a clear need for more capacity to clear the backlog created by the pandemic, the Suez Canal blockage, restrictive limitations on inland shipments, and other factors, yet there is little evidence of that actually happening. On top of that, labor shortages are making it harder than ever to offload ships at U.S. Ports.

Through all of this, of course, there has been one constant burden for businesses: the trade war with China. It’s been more than three years since former President Donald Trump imposed tariffs on imports from China, and ever since then American businesses have been stuck with the bill.

Why? Because the tariffs in place don’t get paid by China. They are paid by importers, meaning U.S. businesses are the ones covering the cost of the tariffs. The result is that American businesses, importers, and job creators are dealing with added costs to their shipments. For businesses like mine that rely on imports for our day-to-day operations, it means the cost of simply doing business has skyrocketed.

Given the shipping crisis, the added costs are too much. Every dollar we’re spending to pay the added costs of tariffs is another dollar we can’t reinvest in our employees and our business.

And now, even despite acknowledging in the past that the trade war was harmful and shortsighted, President Joe Biden has so far failed to bring it to an end. It’s unsustainable, and President Biden needs to work with United States Trade Representative Katherine Tai to repeal the tariffs that are still in effect.

It is a simple fact that Americans are buying more goods from Asia than ever as our appetite for imported merchandise continues to grow. Attempts to stem the growth of imports in favor of domestic products – the trade war chief among them – have failed. Despite this, importers are still being forced to pay double and triple what they normally would to get the goods that Americans demand, thanks to the taxes created by the tariffs. The Biden administration needs to show it is prepared to relieve small businesses of the additional taxes they’re paying when importing Chinese goods – the very goods that American consumers crave.

It’s time for our government’s leaders to get behind their statements that small businesses are the backbone of the American economy and the American way of life. American small businesses, saddled as they are with disadvantages that leave us unable to compete and profit, are doomed so long as harmful practices like the trade war started by the last administration are left untouched.

If the tariffs are left in place, small-business owners like me will be burdened with the taxes that tariffs add to the products we need to satisfy our customers. Combined with the ballooning shipping crisis, a lot of businesses won’t be able to cope. We need the Biden administration to help in any way it can, and right now, that means lifting the Trump administration’s misguided tariffs.

Ann Brunett is the co-founder and chief operating officer of The Mitchell Group.