Democrats Are Giving ‘Sanctuary’ to Murderers

Anna Paulina
|
Posted: May 30, 2019 1:46 PM
Share   Tweet
The opinions expressed by columnists are their own and do not necessarily represent the views of Townhall.com. 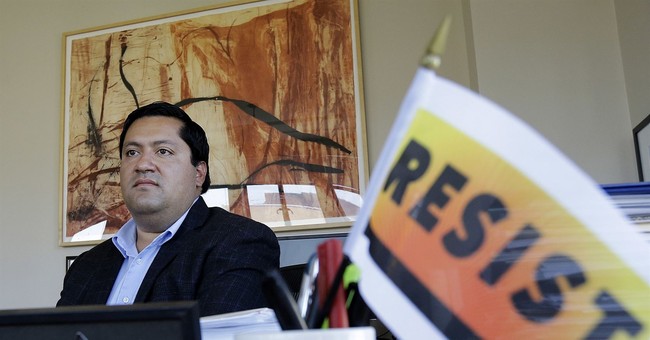 Another day, another preventable MS-13 murder enabled by the “sanctuary city” policies of which Democrats are so proud.

Last week, two illegal alien MS-13 gangsters were among three people charged with murdering a 14-year-old girl, Ariana Funes-Diaz, in Maryland. To make matters worse in this tragedy, neither of the alleged teenage killers should have been free to terrorize American communities in the first place.

Remarkably, local authorities released the pair in 2018 despite a detainer request from U.S. Immigration and Customs Enforcement (ICE), because Prince George’s County is a “sanctuary” county that refuses to honor ICE detainers unless compelled to do so by a judge.

“These individuals had demonstrated violent criminal behavior before, and because they were released in spite of the lawful detainer, they were afforded an opportunity to take a life,” an ICE official said in a statement.

In case you were wondering, 14-year-old Funes-Diaz was killed in the gruesome manner typical of MS-13 violence — she was hacked with a machete and repeatedly hit with a baseball bat.

So-called “sanctuary” policies, it turns out, merely create a protected class of criminals who can avoid punishment for their crimes merely by virtue of residing in the country illegally, allowed to roam free to destroy lives.

When Donald Trump was elected, he promised to fix our broken immigration system and restore true border security, in part to protect American communities from the plague of violence associated with MS-13. Sadly, the Democrats have undermined the president’s efforts at every turn, even refusing to provide funding for the border wall that many Democrats had openly supported just a few years before.

The Democrats’ obstruction campaign isn’t confined to the halls of Congress, either.

For years, liberals have promoted the idea of creating “sanctuary” communities across the country, urging state and local governments to create safe havens for illegal immigrants by refusing to cooperate with federal immigration enforcement authorities. They’ve ramped up those efforts considerably since Trump’s election, hoping to blunt the impact of federal policies designed to address the illegal immigration crisis.

In other words, the Democrats have openly asked local authorities to violate U.S. immigration law and put their own communities at risk in the name of social justice.

Last year, Senate Democrats even blocked an initiative to crack down on sanctuary cities, complaining that the measure didn’t address “Dreamers” as an excuse for blocking it.

Let them explain that one to the family of Ariana Funes-Diaz.

That disingenuous maneuver is even more galling in light of the fact that Democrats are clearly aware that sanctuary policies put law-abiding citizens at risk. When news reports indicated that the Trump administration was merely considering a plan to send migrants detained at the border to sanctuary cities upon their release, Democrats were incensed.

House Majority Leader Steny Hoyer, whose district includes parts of Prince George’s County, expressed outrage that President Trump would “penalize or visit retribution [upon]” sanctuary cities by letting them host the illegal immigrants they are so intent on protecting from deportation. House Speaker Nancy Pelosi, whose hometown of San Francisco is a prominent sanctuary city, called the notion “disrespectful.”

If sending illegal aliens to cities that explicitly desire to provide them with sanctuary is “disrespectful,” then how should we describe the practice of deliberately releasing violent criminals into American communities? “Heinous” doesn’t seem like a strong enough term, certainly not for Ariana’s family.

The Democrats bear both moral and political responsibility for the predictable and preventable tragedies wrought by their support for sanctuary cities. Ariana Funes-Diaz was not the first innocent victim to pay the ultimate price for their callous indifference to human suffering, and sadly, she won’t be the last.