Andrew Wilford
|
Posted: May 06, 2019 2:04 PM
Share   Tweet
The opinions expressed by columnists are their own and do not necessarily represent the views of Townhall.com. 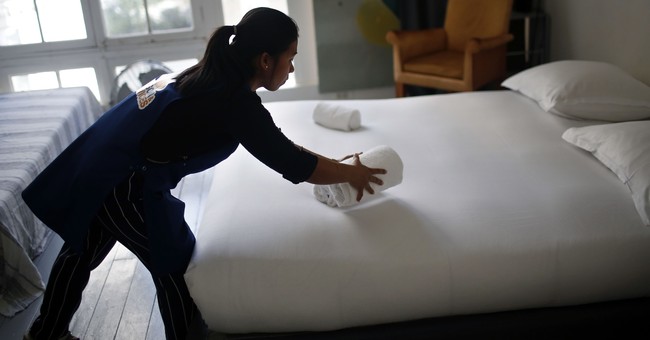 Last June, the Supreme Court overturned a rule requiring businesses to have some form of physical presence in a state in order to be subject to sales tax collection liability within that state. Hoteliers think that’s as good a reason as any to hit at upstart competitors who threaten their privileged incumbent status.

At issue are lodging taxes assessed by states and local governments, a source of much consternation for government officials and homesharers alike ever since the inception of the sharing economy. Hotels have argued that homeshare services like Airbnb should be treated the same as the biggest hotels are when it comes to regulation and taxation. Homesharers, on the other hand, have pointed out that this business model is very different from that of hotels and would be devastated by being exposed to regulations and taxes designed for a different industry.

Airbnb and other homesharing services have worked with state and local governments to develop “voluntary collection agreements” (VCAs), by which Airbnb agrees to collect taxes on behalf of homesharers that use its platform and remit them. In return, Airbnb receives a form of legal legitimacy, and a tax system that is more tailored to its business model. VCAs aren’t a perfect solution, but they are better than simplistically imposing hotel taxes on a very different new industry.

The Supreme Court’s decision in South Dakota v. Wayfair, hoteliers argue, changed that. The American Hotel and Lodging Association released a report arguing that the Wayfair decision means that states and localities, no longer bound by “physical presence” rules, now can hit Airbnb with whatever taxes it likes.

However, this argument is a bit of a non sequitur. Physical presence was never at issue — homesharers of course always had physical presence in the state or jurisdiction they were operating in (in the form of the home they were sharing!) The question has always been the responsibility that Airbnb itself had to collect and remit taxes on behalf of the consumers using its platform.

The Wayfair decision says nothing about the tax treatment of the business model that Airbnb operates. And while it is true that many states have used the Wayfair decision to justify taxation of other online marketplaces, consumer goods sales involve very different tax policy questions from home and room rental.

In effect, large hotel chains would like to use Wayfair to argue that states and localities should remove Airbnb from the negotiation table as governments ponderously react to this relatively new industry. That could result in the rules affecting Airbnb not taking into account the industry’s uniqueness, and failing to find a long-term solution that recognizes and fosters new business models that benefit consumers.

The Wayfair decision itself has shown that state governments often prioritize access to new revenues over tax policy that takes into account the unique circumstances of the businesses that are affected by it. Despite the fact that the ruling exposed small online retailers to potentially thousands of taxing jurisdictions nationwide, state governments have gone ahead with safe harbors that were too low, shoddy and incomplete regulatory pronouncements, and overly complex tax environments — all in the name of pretty meager revenue offerings.

Airbnb, and the homesharers and lodgers that use the service, should not be subjected to a similarly slapdash procedure. A seat at the table for homesharers is important as governments react to the gig economy, whatever the Wayfair decision — and certainly hoteliers — say.