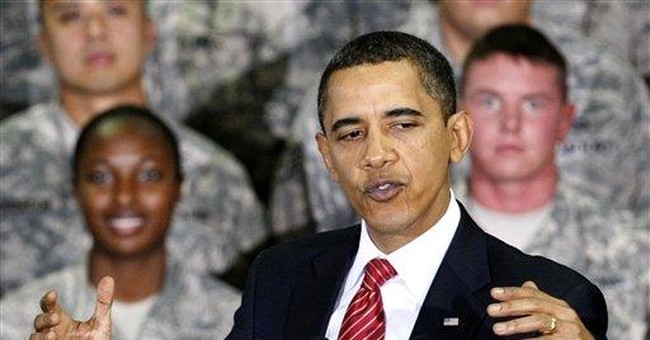 When I argue that abortion under most circumstances should be illegal, I am charged with trying to legislate morality.

When I say divorce ought to be harder to obtain, not easier, I am accused of trying to legislate morality.

And when I say states should be free to make laws concerning adultery, homosexual behavior, contraception, or premarital sex, I am accused again of trying to legislate morality.

Yet when Barack Obama and the Democrats propose making it a crime to not carry health insurance, no one seems to notice that they are very aggressively trying to legislate morality.

In fact, the same people who object to my proposed legislations of morality seem to think it’s a wonderful virtue that he wants to do so many “good” things for the poor people who can’t currently get health insurance. And if that plan entails criminalizing the decision to forego such insurance, well, why wouldn’t we fine people or put them in jail for refusing to repent of their obstinate immorality in obstructing such a virtuous social project?

We have been told that poor people, children and people with pre-existing medical conditions are all being mistreated by our current health care system. We have been told that it’s embarrassing to be the only developed nation in the world to not provide universal health coverage to its citizens. And we have repeatedly been told, “The status quo is unacceptable.” The only possible meaning here is that it is “morally” unacceptable.

But President Obama hasn’t merely claimed that “we must” (read, “it’s morally necessary that we”) help people get insurance, he’s actually gone a significant step further by grounding his moral vision in arguments from the Bible. The president has said that opposition to his plans comes from people who are unwilling to obey the Biblical mandate to “be our brother’s keeper.” He’s not just legislating morality. He’s doing so on the basis of religion. If a conservative dared to offer such rationale, “Republicans Seek Theocracy” would be the Newsweek cover, not some picture of a former vice-presidential candidate in running shorts.

Now, before misunderstandings take root, let me make one thing perfectly clear: None of this bothers me in the least. Hearing Obamacare sold with moral and even Biblical language is perfectly fine with me. What irritates me is the hypocrisy of people who accuse their enemies of legislating morality and then blithely resort to making moral arguments in favor of their own political agenda. So in the name of clarity and finality, I suggest we all admit one simple, obvious fact:

To clarify, a law is nothing more and nothing less than a piece of codified intolerance. A society, through whatever mechanism it makes such decisions, agreeing that some behavior is not just bad, but so bad it must be prevented by force, and that’s how you get a law. Whether that behavior is abortion, adultery, divorce, speeding, marrying more than one woman, using heroin, or refusing to purchase health insurance, the point is that all laws prohibit behavior society deems evil or immoral enough that force “should” be used to discourage and punish it.

Furthermore, if morality did not precede and underpin legislation, there would be no basis for criticizing “unjust” laws. Slavery was banished, women were given the vote, and interracial marriages were finally allowed for supremely moral reasons. Not only is morality the basis for “good” laws, it is the vital motivation for rectifying “bad” ones.

“But legislating morality doesn’t work.” Really? Well, I know there is truth in the claim that you can’t change hearts by coercing the body, but there is also truth in the claim that laws create taboos which influence both behavior and hearts over the long run. Laws have a stigmatizing effect on behavior, thus being both the result of and the reinforcement for the culture’s moral codes.

Also, even though law is an admittedly clumsy instrument of moral influence, it does tend to make people behave as if they are good even when they are not. And so far as the public interest is concerned, getting people to act good is nearly as useful as getting them to truly be good. Although I’d prefer you not stab me because you are a decent person, I’m still willing to stand in line next to you at the baseball game so long as I know you’re merely (but vividly) afraid of what will be done to you if you do act on your violent impulse. Simply put, we legislate morality because it’s the only way to get some people to behave.

Oh, to be sure, many legislations of morality are unwise. But the notion that there could ever be some amoral legislation which is preferable to the moral sort is pure nonsense. There is no other kind of law besides that which coerces a particular vision of morality. After all, what besides a strong moral argument could ever justify taking people’s liberty or property away? Yet somehow, in a linguistic masterwork fit for the propaganda hall of fame, some (usually conservative) proposals are decried as “unjust” moral legislations, whereas other (usually liberal) proposals are just good ideas whose time has come.

So the next time someone complains in print, in person, or over the air that some proposal is an illegitimate legislation of morality, I suggest booing him. If you have a newspaper nearby, whap him on the nose … twice for good measure. Short of a self-induced epiphany, this may be the only way he finally notices that saying it’s “wrong” to legislate morality is itself an overtly moral position.

Finally, just to be sure the point is made rather than implied, I have no problem with Barack Obama phrasing his moral ideas in Biblical language. I don’t generally agree with his interpretation of Scripture, but I certainly have no objection on principle to him amplifying his case this way. However, I just want to be sure that the next time I refer to the Bible in explaining what I believe, I don’t have to endure another hypocrite claiming that I’m injecting religion into the public arena. Let’s make sure the strike zone is the same for everyone.

If people are going to be allowed to legislate their morality (remember, there really isn’t another option) this means religion is going to a factor in these discussions. If such reasons are unpersuasive to you, so be it. But please don’t give me any silliness about how it’s fundamentally wrong to mention religion in the public sphere. For the vast majority of people, including both the president and me, our morality flows from our religion. Hence our political views are ultimately going to be outworking of our religious views, even the ones about freedom and tolerance.

This means that all laws not only enforce a moral vision, but they also all represent some sort of religious vision as well. Even the complaints that one religious viewpoint is being “unjustly” overemphasized or that some religious principles “ought” not be codified in law are both themselves byproducts of particular ideas about the place of freedom in God’s world. If this final step seems like simply too much for you to embrace in a single column, that’s okay. I understand. It can be painful to suddenly discover yourself ravaged by so much previously undiagnosed hypocrisy.

Hence, I’m quite satisfied merely to see us all agree that morality is, in fact, the only source and justification for law. Restoring tolerance for religious talk may be one cognitive bridge too far for today. But you can’t blame me for trying. After all, I’m only following the lead of my president.