We Need a Separation Between Politics and Banking

Andrew Quinlan
|
Posted: Jan 27, 2020 12:42 PM
Share   Tweet
The opinions expressed by columnists are their own and do not necessarily represent the views of Townhall.com. 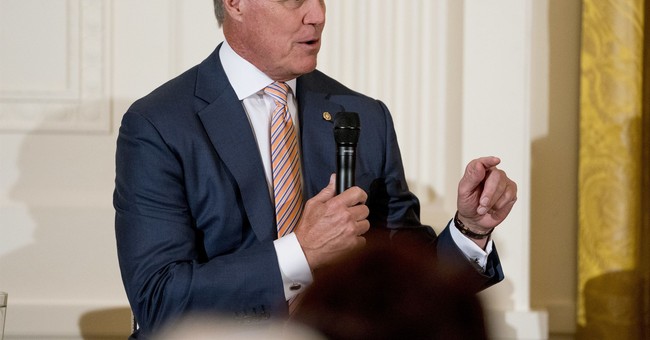 This week, the House Financial Services Committee will convene a hearing to question efforts to modernize the Community Reinvestment Act. Not only are the reforms proposed by the Office of the Comptroller of the Currency (OCC) that aim to prevent a repeat of the subprime lending crisis and reduce compliance burdens on banks long overdue, but the administration should go further and clarify the CRA’s role in preventing ideologically based lending discrimination.

Last month, Senator David Perdue (R-GA) and 14 other senators wrote to the Federal Deposit Insurance Corporation (FDIC), Federal Reserve System Board and the OCC to highlight “a disturbing trend in the financial services industry.” Specifically, they note that, “Over the past few years, one after another, the largest banks in the United States have steadily “derisked” from industries such as firearm manufacturers, private prison services, and fossil fuel producers,” and that, “according to the public statements of the banks and their executives, these actions are mainly designed to curry favor with partisan interest groups.”

Banks benefit from taxpayer-backed deposit insurance along with other implicit protections and are required by the Community Reinvestment Act (CRA) to meet the credit needs of their local communities. Historically, the focus of CRA has been on ensuring that low and moderate-income neighborhoods have access to credit, but serving local communities surely means also serving the lawfully, creditworthy businesses upon which they rely.

What good is the Second Amendment right to keep and bear arms if manufacturers and sellers of firearms are denied the access to credit that any business needs to operate?

Activists and their allies in Congress that are pressuring banks to restrict access to financial services recognize the potential to shape the economy toward their desired ends. Such an end-run around the legislative process is attractive when their desired legislation proves politically unpopular or conflicts with constitutional protections.

Choke Point was effectively ended in 2017 when, according to the agency’s press release, the FDIC issued a Financial Institution Letter “encouraging supervised institutions to take a risk-based approach in assessing individual customer relationships, rather than declining to provide banking services to entire categories of customers without regard to the risks presented by an individual customer or the financial institution’s ability to manage the risk.”

Federal regulators, in other words, were forced to admit that they couldn’t simply create a “hit list” of industries that liberals find distasteful and then tell banks that serving them would create a “reputational risk” that might trigger an enforcement action. That stance was bolstered in 2019 with settlement of a lawsuit brought by short-term lenders targeted by the government.

But activists nevertheless saw the program as a proof of concept that they now seek to replicate. For instance, the group Real Money Moves, which includes Hollywood celebrities, athletes and prominent feminists, operates at what it calls “the intersection of money and justice” and works to target “extractive industries” like fossil fuels and private corrections.

They have a right to invest their funds however they please, but banks should not be bowing to their demands for lending discrimination. Nor should the government, under the rules of the CRA, allow them to do so.

Even worse, Financial Services Committee members are using the implicit power that comes with the position to intimidate bank CEOs into dropping clients. At one hearing, Rep. Carolyn Maloney badgered a CEO to go “above and beyond the law” to impose “common-sense gun safety policies” on clients, and she praised two other banks that dropped gun manufacturers for opting not to “finance gun slaughter.” Rep. Alexandria Ocasio-Cortez has similarly gone after banks for working with firms that build federal immigration detention facilities with some notable success, while others have targeted fossil fuels and, by extension, sought to raise energy costs on consumers.

That these attacks to some degree have worked will only serve to encourage expansion into new policy areas.

One can take issue with one or more of these industries and still see the downsides of allowing wholesale lending discrimination, or of permitting politicians to effectively enact far-reaching policy changes without passing actual legislation. Imagine the chaos that would ensue if conservatives and Republican politicians retaliated and pressured banks into dropping abortion providers, tech giants, legal marijuana growers, or the news media. Where would the escalation stop?