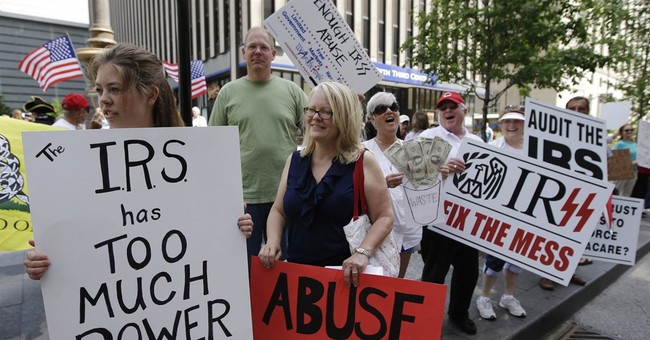 Back in 2009, James O'Keefe and Hannah Giles secretly taped multiple ACORN employees supplying free tax advice on how to hide income from a brothel staffed by underage girls smuggled in from El Salvador. The ACORN workers told them that the brothel could be characterized as a "school" on the tax forms and, because the sex slaves would be underage, that they could also be claimed as "dependents."

After the scandal broke, Andrew Breitbart referred to it as "the Abu Ghraib of The Great Society." He argued that the scandal exposed the dark underbelly of the Progressive movement: that Progressivism itself was more important than the liberal ideals it supposedly espoused. The entire episode is outlined in some detail in my new film Hating Breitbart which was released digitally nationwide last month.

But if ACORN was the Abu Ghraib of The Great Society, then the current and ever-growing IRS scandal is its 9/11 -- at least if yesterday's dramatic testimony by IRS victims is any indication. Unlike 9/11, however, this wound is self-inflicted. It's almost as if the IRS has flown planes into its own building.

Who knew that the 16th Amendment, which made the income tax constitutional, would ultimately lead to government bureaucrats asking American citizens about their mentors' politics, with whom they freely associate, or the content of their political speeches? It begs the question: did the authors of the 16th Amendment intend for it to subvert the 4th, or did it just turn out that way? The 4th Amendment protects us from unreasonable searches and seizures, including our papers, and yet every year we Americans are required to tell our government how much money we made, how we made it, when we made it, from whom we made it, to whom we gave it, what we bought with it, where we invested it, et cetera ad nauseum -- how is this in any way reasonable?

Oh, but there are deductions! In order to get them, the only thing we need to do is tell the government how much money we gave to charity, how much money we spent on saline solution, how many miles we drove to see doctors, how much money we spent on private health insurance, whether or not we bought a government-endorsed furnace or window, and a thousand other private details from our private lives. That's all! It's so easy most people just hire a professional to manage all the private questions for them, or they purchase computer software to navigate the tangled mess otherwise known as the tax code.

Ah, the tax code! Where brothels can be schools and 14 year-old sex slaves can be claimed, in theory, as dependents! Thousands of pages of indecipherable government-speak that not even the IRS claims to fully understand, riddled with so-called "loopholes." And what are these loopholes, anyway? They are actually blatant examples of government favoritism and special treatment for the special interests that have successfully lobbied for them -- and granted to them by our dear political leaders in Washington.

If you don't have a loophole designed for you, start bundling money for our dear leaders in Washington and get yourself one. But watch out! If you happen to hold the wrong opinions, you might just find that the loopholes have been weaponzied against you, depending, of course, on who's in charge.

To those who claim to represent the 99%, you will find them in yesterday's hearings speaking truth to power. No, these folks weren't throwing garbage cans through Starbucks windows, defecating on police cars, or wearing silly masks to conceal their identity. These are normal, every day middle-class Americans who play by the rules and who made the awful mistake of having a point of view. They complied with tax law, they filled out their forms, they sent in their money -- and then they were targeted by the government, harassed, stifled, silenced, and disenfranchised.

Watch out, Progressives -- the machine of State can be turned against you, too, depending upon how the political winds shift. And that's the point -- this IRS scandal is not just a Tea Party problem, it's an American problem. Not incidentally, this type of abuse is exactly why Tea Party Conservatives call for smaller government -- so that we can all retain our liberty, regardless of which party is in charge. That the IRS has become suicidally abusive is not exclusively the Democrats' fault -- this monster took decades to build, and the Republicans have done more than their fair share, though the Obama administration has certainly taken the IRS to new lows.

The whole sick mess needs to go. The whole thing. Don't worry about throwing the baby out with the bathwater because the baby is dead in the bath. The entire tub is corrupt and is irredeemable. The agency needs to be dissolved.

We need to shift to a revenue raising mechanism that does not require tax professionals to comply with, does not require that we open our personal books to our potential political opponents, and does not include countless loopholes for the well-connected and corrupt. We need to permanently shift to a simple, hands-off, flat consumption-based tax and leave the IRS to the ash heap. Human beings, even well-intended Americans, cannot be trusted with something like an IRS.

The government that is large enough to give you everything you need is also large enough, apparently, to demand the content of your prayers. Let's do ourselves and future generations a favor and return to the good old-fashioned liberty our great-grandparents enjoyed.